First time I have tried using the mobile phone to take video to upload to YouTube inspired by what JRKO is doing on his diary. Next time I will use the phone in landscape not portrait 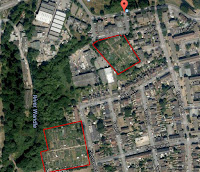 Well the heavens opened in the morning and I went to Spencer Road to meet up with Derek the site rep that I met at yesterdays Reps meeting. Until that meeting I didn't know that their allotment was basically behind ours. See satellite picture below.

He met me at the gate and we both got drenched as the heavens opened as we were heading for his shed and plot which was right at the back of the allotment. Luckily he had a small camping stove and a kettle and we huddled in his shed until the rain stopped and then he gave me the two and six tour of his allotment.

I said goodbye to Derek about 11:30. Derek is going to visit Mill Green on a Sunday morning and I'm going to return the favour. Must get the camping stove sorted and buy a little kettle. I made my way to Georges café to have a comfort break and lunch which was a nice Bacon sandwich and coffee...

The parks department had cleared more debris from the entrance and more from the plot with the Japanese Knot weed. I appeared to be on my own and it looked like they had left the door open, unbeknown to me John was working in his greenhouse and I would not discover he was on site for another 3 hours

The excess potatoes were planted in flower buckets.

The strawberry bed had a good weeding and the strawberries in pots have finally made it into the ground. I used the weed membrane as a template for spacing and then dressed all around them with composed stable manure and watered it down and in then covered once again with weed membrane. Fake strawberries (red pop bottle caps) added to deter any small birds that can get past the chicken wire from thinking there is anything edible there for them

The watering system was reconnected and I found to my dismay that the guns at the ends had cracked or not weathered very well. I have some traditional ends to use at the moment, but I see a visit to ASDA and picking up 4 guns on the cards.

Beds 1 & 2 were uncovered and limed and watered in

Storage boxed with lids replaced those without in the shed, just encase more micky activity occurs.

I taped the joints to the cheap cold frame I got in the sales last year for a £5 and put the cover on it and timber around it to stop it blowing away. Time fly's when your on the allotment and having fun and Jens baby sitting didn't end until about 7:30 by which time the sun was going down and my plot was in the shade of the trees and I had quite frankly had enough for the day.
Posted by cadalot at 06:32