Too knackered to do the allotment today, plus it would be pushing my luck with Mrs C after being free as a bird all yesterday, so a lazy day today. Kelly rang to say my adopted/surrogate daughter Sara wanted to start clearing her garden to her new home. So I had a sort out of bits and bobs and she ended up with a spade a fork some hand tools and kneeling mat, seed trays, tray modules of various shapes and sizes, a couple of propagator covers, pots and a load of French marigold seed to get her going, which I dropped off when I picked Kelly up.

Took Jen & Kelly out for Sunday Dinner, some relaxing time after and then before I fell to sleep on the sofa I went out into the wind and cleaned up the strawberries and added another layer as I had strawberries left over from the allotment. 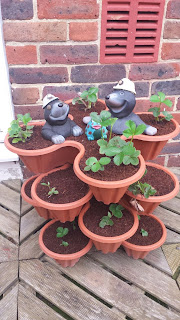 A thin layer of coco peat will keep the moisture in and show me when the strawbs need watering. 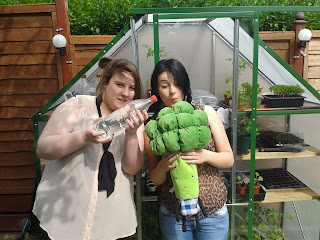 That's Kelly on the left and Sara on the right and Mr Broccoli in the middle
Posted by cadalot at 08:30