Jen suggested that I go and play over the allotment as she would like to have me around on Easter Sunday so I went from 10:30 until 4:00 with only a bag of chocolate for a sugar rush to keep me going.

I managed to get the Beds 11 & 12 cleared and planted, I augured the 18 holes per bed. I then mixed 6 scoops of coco peat, one of coffee grounds and a touch of potato fertiliser and 6 scoops of verve compost in a trug at time.

A large scoop of the mixture went into the bottom of each hole. Followed by a seed potato and then filled up to the top with the mixture. 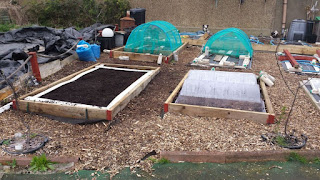 Then the timber was installed around bed 13 and the spoil from the augured holes and various plots and flower buckets, plus some year old manure went into the bed 13 to level it up. I'm going to leave it a week to settle and get rained on so I can Auger and get the last of the potatoes in next week. 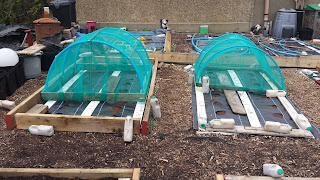 As you can see I didn't get around to installing the timber joist around bed 12, another job for another day but hopefully the timber and the hoop netting will hold off any frost a little if we get any this month.

Well the council parks department have been clearing the drop off and pick up area I was trying to get funding for and they have removed the vegetation around the bees. Nobody from the council bothered to inform me that they were going to do it, we just assumed they got the wrong end of the allotment and were supposed to be clearing the Japanese Knott Weed at the other end of the site and had made a mistake.

As they were going and had already cleared the area we want for deliveries of woodchip and manure plus parking we asked them what their remit was and it looks as of they will be back to clear the mound of rubbish inside as well. No money but they are working on clearing the debris on Saturday on overtime?!!!

So Tuesday I will send them an email and see if they are going to do anything about fencing the bees in again. Who knows we may get the area fenced off as well if we are lucky. Yep I've gone from feeling really negative about the rep issue to positive..
Posted by cadalot at 05:57