Last of the Potatoes into Bed 12 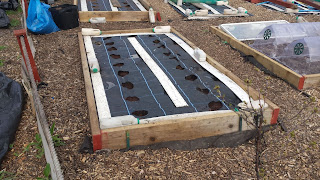 Lovely sunny morning, no need for a coat and a visit to the allotment to take the grass, paper shredding's, coco peat and auger to get the last of the potatoes into bed 13. Again a mixture of coco peat, coffee, potato fertiliser and verve compost to prime the holes and to cover the seed potatoes.

Dalek 4 is getting topped up nicely in layers and then a coffee core was primed and watered, again using a watering can and the water from the greenhouse water butts.

the mains water has been turned on but I have not reconnected all the hoses yet so watering cans and comfrey drink for the potatoes. 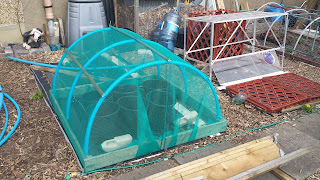 filled 6 x 10 Litre Flower buckets with one potato in each, and placed under the netting as protection against any possible frost. There are a few more potatoes that need planting in buckets, but I ran out of time as I needed to leave to pick up the wife from her sisters.

Next visit has to be the last of the potatoes into more flower buckets, strawberries to get a dressing of composted farmyard manure.  Weeding the onion bed as a few weeds have started growing, taking over.

I'm guessing the onions could do with a bit of a feed as well.

In the evening as the sun was setting I was out sieving verve compost and filling vending machine cups ready to sow a tray of Pompeii Spring Onions. I also hydrated another two blocks or coco compost.

I heard back from the Council regarding the cleared area and the removal of protection to the Bees and Allotment growers.

"As the grounds team were going to be on site clearing plot 9 in preparation for ongoing treatment of the Japanese Knotweed, I asked them to  carry out a litter pick of the worst of the items in the area by the gate. They appear to have cleared much more that I thought they would, which is a bonus as there was a large amount of rubbish in there, but I have no plans to carry out any fencing works to the area."

I have spoken to the Bee keeper as I knew she would be upset and told her and have suggested that she lodge a complaint in writing, She received a similar letter apologising for any inconvenience caused, but no offer to address the problem so after chatting she has sent an email asked him directly how they intend to fix the problem they have created.

I have replied as if we have not yet spoken about it and reminding them that it was the council that demanded that the protection be in place to make the bees fly up and not straight out at waist level from the hives. And that when the new plot holders on the side of Bee enclosure did a similar clearing a couple of years ago a herris fence with debris netting was installed by the council to replace the high brambles.

It also transpired that a certain someone had been informing her that it was all of my planning to get her removed from the allotment!. She said initially he sounded credible until a couple of other things he said about others involvement made her question what he was saying. She now knows that I had no idea what they were doing and had thought they had just gone to the wrong end of the allotment where the Japanese Knott weed is.
Posted by cadalot at 06:16