Friday and Saturday - Repairing and installing new computer hardware and then an office clean out - 3 black sacks of things that may be useful one day removed.

Derek the rep from Spencer Road Allotment paid a visit to have a look at our allotment, Bob arrived and informed me the woodchip is on order and as soon as the tree surgeon has some good stuff he will drop it off. Andy was on site today as well. 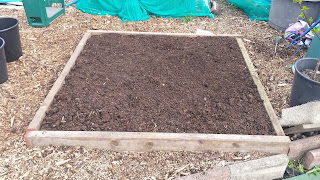 First point of business - Bed 16 (formally planned Bed 15B) it just easier to call them round numbers even is they are half the size of the other beds. Was worked with the Claw (The Ultimate Garden Claw Cultivator Tool ) according to the marketing hype and I have to say, it is really useful and provided that fine tilth that all the books tell you to get. I did however when working this bed and Bed 15 remove nearly 3/4 of a flower bucket of stones, bolts and nails. 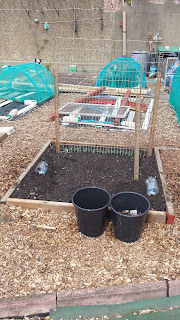 So on completion the planting of two rows of carrots and covering with a solar tent. Next the frame to the hoop cage was moved over the bed, then on to Bed 15. 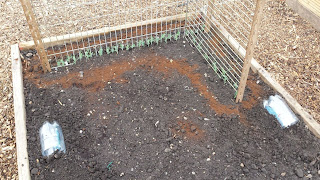 On clearing the stones and dross the pea frames using steel angles and mesh from the deconstructed dog cage, then the planting of a tray of PeaWee 65 peas that were beginning to hold hands. A barrier of dried coffee grounds was placed around the  peas and two primed slug traps were added for good measure.

It was amazing how long prepping 15 & 16 and sowing carrots and plating peas took me.

So a mad rush to get the ever expanding weeds out of the over Wintered Onion Bed 9 - The weed were added to those removed from beds 15 & 16 which mainly came to the surface when using the claw, and were drowned in a flower bucket destined to become useful plant food. 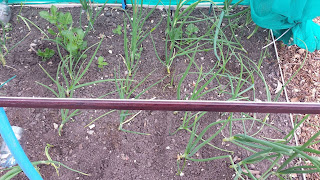 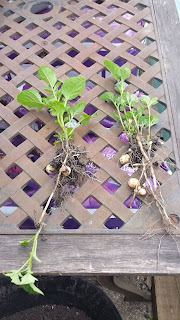 There were and are however a number of Volunteer Potatoes coming up, as you can see below a couple of the smaller ones on the table. On seeing these I have decided to leave the others in the ground until I have enough time to extract and plant in flower buckets. The obviously want to live, and I want to see how many I get and the quality of Volunteers. This does however make me even more determined to use buckets in the future for my potatoes. 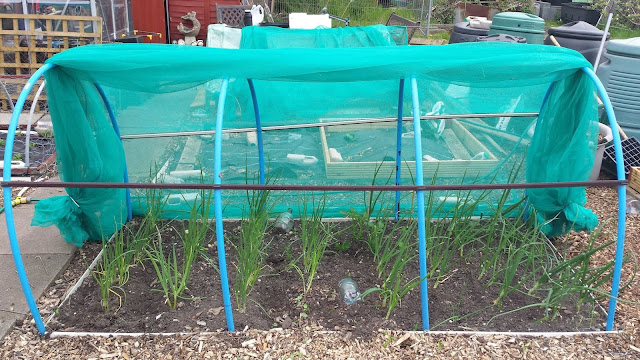 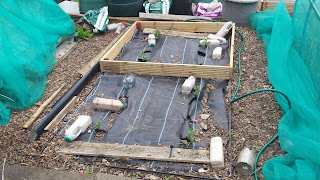 Looking at Bed 8 that had .... you guessed it Potatoes in last year there are many Volunteers that have made their way to the holes in the weed membrane

- so I have removed the membrane and the timber hoop frame and they are my first port of call on my next visit.

Some flowers from home became a layer of green compost, a layer of shredded paper and coffee grounds were added and watered in. I watered everything that need it, and made a decision to buy 4 mutli jet hose ends from ASDA for the four hoses I have on the watering system as the old fashioned ends are just too awkward to play with. I just need to remember to take them off and put them away for the Winter, so they last longer.

The trees are in bloom and look great but I need to get the training wires or bamboo up and prune off the redundant branches.
Posted by cadalot at 08:41