OK we have seen a rat(s) but only one at a time going from left to right and right to left, using our garden as a rat run - the neighbour found a dead one that a cat or fox had killed, he laid traps and bait and caught another, then I saw another cheeky (B word meaning he had not father) wondering around our garden.

Thursday off to clear up the garden following seeing a rat - and having the rat man visit. I cleared all the old fencing that blew down and I replaced then stacked waiting for recycling and disposal to find the little darlings had made a trench run under it.

Friday - Managed to get down on the Allotment from early morning until lunch time - hit the hillock at the South West corner - cleared four black sacks of weed and nettle roots from it before I stated to reduce it down to average ground level - sieved the earth and used to fill three of the five rose enclosures and the depression in the area nearby that I had already dug. another builders sack of glass and, I've found more laid flat and just under a layer of earth.

Saturday - the Rat in the back garden and mould on the garden furniture stops digging on the Allotment. Decided to take the cover off the garden furniture, just to make sure "Roland" (the rat get it!) - had not made base camp under it. to find that the wood had white mould on it - so I jet washed it off and in the process started something I should not have. It took all day to jet wash the patio timber decking, and under - (concrete to falls and an acco drain) the small retaining wall and the coping stones and decorative fencing. Look great now but I've missed another day of digging on the allotment.

Sunday - Frost on the ground nice and sunny- who knows what if anything I will get done - knee is killing me as standing all day yesterday.
Posted by cadalot at 22:28 No comments:

Weekend roundup - Cold wet windy snow and not a change of getting down to the allotment - on the positive side painted the coldframe a few times and have cut and painted the number posts for defining the boundary of Plot 1A, in addtion pained the recycled timber frames that are to become the base to the coldframe and the mini hoop polytunnels and netting.

Picked up a 10kg tub of Blood Fish and Bone on offer for £9.99 at the garden centre and 30 more bamboo poles.

Picked up a tube of external grade hard as nails and stuck fizzy drink bottle lids on the top to protect eyes, and burnt holes in the bottles and now have five poles of plastic bottles for the mini plastic greenhouse or cloche I'm planning.

My neighbour is going to keep an eye our for roofing batten on jobs for me so I can make plastic netting frames a bit like the leaf compost frames I made with wire mesh.

Booked off Thursday to make a long weekend so I might get down to the allotment over Easter on the hope of dry weather from Monday.
Posted by cadalot at 21:15 No comments: 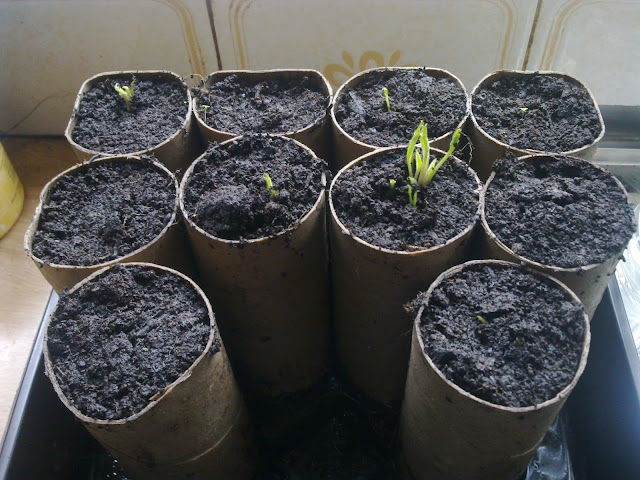 OK I popped these little guys (Comfrey Roots) into loo rolls in a propagator on the 22nd of February and noticed the first (largest) one on Saturday 16th and the others this morning Monday 18th so it looks like they have taken about 23 days + ish to show.
Posted by cadalot at 20:09 No comments:

Email ThisBlogThis!Share to TwitterShare to FacebookShare to Pinterest
Labels: Comfrey

I've  managed  to get a couple of hours in after work this week and have taken yet another four bags of couch grass, bramble and nettle roots home to dispose off. I just can't believe how much dross can come out of such a small area. The fork goes in and I lift and it all comes to the surface. I work backwards and around until I can slowly pull the mass up and try to get up as much as I can without breaking the darn stuff. I'm then following and working my way along the system systematically.

In some areas I'm double digging the fork depth and bringing up the root network to the surface  and what's left once I've picked everything out and tuned the area over again and again is very fine material, but progress is not fast.  I'm just hoping that it will slow down the re-growth to a level that I can keep on top of it.

looking at the photograph you can see a lighter rectangle on the wall. Looking at the historical birds eye views on Bing Maps this is where the second shed stood. It appears that in this area there is a layer of stone under about an inch of soil - and it's going to take some digging out. Anyone have any ideas what I can do with what I'm sure will end up as a huge pile of stone appart from a stone path.

I could not resist, as I have a slightly larger area and different trapezoidal shaped plot  than I thought and planned I have actually increased the gaps between the beds to 600mm from 450mm which is enough length for me to kneel down on the kneeling stool with the two handles.

The hoops denote the 1.2m wide beds and assisted me in checking that what I thought would fit will and now I can re-plan my plot. In addition talking to my neighbour he does not want to come closer to my plot and we have a really wide path as you can see from the string on his plot and the timber on mine. So he is happy for me to have rectangular beds on the boundary that will  eat into the wide path.

I will upload a revised more accurate plan shortly once I've finished it.

On the way to a meeting at the Imperial War Museum today I saw a plastic compost bin on freecycle and sent an email asking for it and by the time I got out of the tube they other end, it was mine. I collected it on the way home and  it is in the back of my Corsa on a tarp and will be dropped off to the plot over the weekend.

From the look of things I will not be getting a lot done Saturday, as I have a doctor's appointment in the morning for my knee which just does not want to mend and the weather forecast is rain
Posted by cadalot at 20:10 No comments:

Up early and clear the frost off the car windows then down on the allotment by about 8:30. I started by clearing all the material just to the left side of the shed, where all the broken glass was.  So large lumps into the suitcase and smaller pieces into the plastic tug. This was when on digging into the pile of glass I came upon these two little fellows. 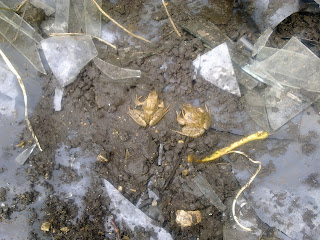 So I found some pots and bricks, old wood and set up to create a Toad Abode 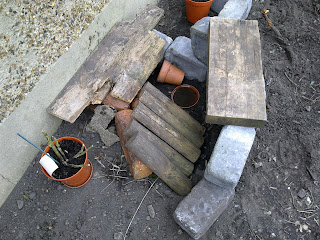 There turned out to be eight of the little fellows and below is the smallest sitting on the shovel ....

All were transported to their new temporary home (I will make an area for them) along with their food source who had also decided to live amoungst the glass. 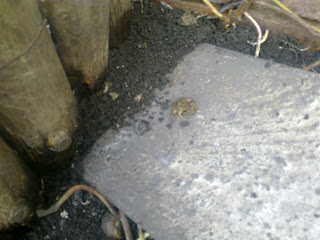 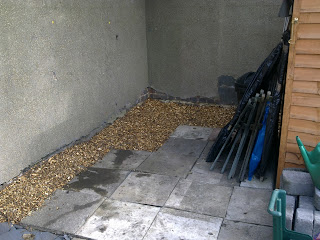 Picked up 17 gray paving slabs from a person advertising on freecycle and took to the allotment. Cleared the right of the shed (as you look at the door) and extended the path and set in the kerb stones and made the base ready for the grow house that is going to live there, or perhaps the coldframe has just popped into my mind. 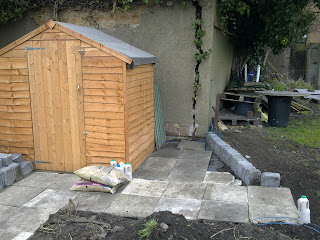 I met Addy for the first time today he is the guy who has taken on plot 2, and had come over to see how things were drying out and when he may be able to come over with a cultivator and turn over the  grass that is coming up all over his plot. He spent most of last year just clearing (3 skip loads) and weeding by hand, does not sound like he actually managed to grow much due to the continuous rain.

So picking up and laying the paving slabs took me from about 8:30 - 12:45 then I went home for some lunch with the intention of perhaps doing some clearing up of the back garden, and sorting out the last fence panel. I was about to start when Keith my brother -in-law asked if I could come out to play (code for he was going to the allotment) as it happened Pauline (his wife) was with him. Unfortunately Jen was waiting for one of Emmas friends to arrive whilst Emma was in the shower so told me, she wouldn't go and to go and play....

As instructed I took some more water and a mug as Keith has a stove and kettle in his shed, but currently we have no water on site until it's turned on at the end of March (funnily enough the same time we have to stop having fires on the site..... don't go there I know).
The new young couple on 3B were there digging and weeding, Owen was over on his fruit tree plot at the rear of the allotment.

Did a little clearing up then Keith called me over for a drink, which I was finishing when low and behold Jenny (my wife) comes bowling into the site with a Mug and a large grin on her face. Emma had dropped her off on her way out shopping with her friend. As much as there are times I love being the only person over there, I do like to have her company, even if she and Pauline are only taking the Michael out of Keith and I as we labour.

So I managed to dig out another two Hawthornes and removed a vast amount of weeds and work my way along the way up to the middle rose. I did however bend the fork in the process.

I took an old suitcase with me to lug the panes of glass home and Jen helped by breaking the large panes up into the suitcase, I could see she was enjoying herself being destructive. The Suitcase was so heavy that I had to use the barrow to get it to the car and only just about managed to get it into the recycle bin.  Also came away with another three black bags of detritus for the land fill wheelie bin.
Popped into the DIY shop on the way home an bought a mid range (in price that is) fork to replace the bent one - This one has a slightly longer handle and I'm hoping it's going to last, and I need one as I'm hoping to get a few more hours in tomorrow.
Posted by cadalot at 18:46 No comments: