The tree that isn't in the ground yet was once again blown over by the wind, so I bit the bullet and re potted in a large bucket  along the boundary between my plot and plot 1

Placed the collars on the cabbages and managed to muller one, thank god for spare plants, quickly fixed.

Something had been a chomping anyway so slug pop bottles in each corner and watering pop bottles with the bottom cut off and holes made around the top and in the cap have been placed in the cross holes made in the membrane and the bed has been watered on the surface and at depth.

The beading along the ends of the netting and the use of the soft bricks is so much faster to play with than the tent pegs I usually use.

I wanted to plant the Scarlet Emperor Runner Beans in the second bean bay that has been prepped so I had to move the sprout hoops so I decided to try and get the frame erected. Currently there is a tie missing at the bottom of the first hoop and only one longitudinal brace either side. I did bodge up a sway brace to plum the thing but I'm not happy with what I thought was going to be a solution. A rethink for next year is in order and I'm guessing its going to be a solvent weld with water pipe on the top kind of thing.

Some more dross removed from the greenhouse and I've found my sweet corn flexi pots so they can go in. 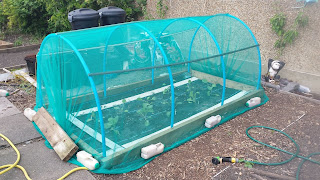 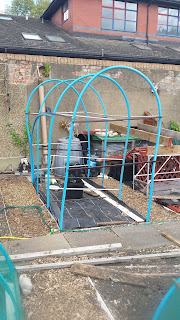 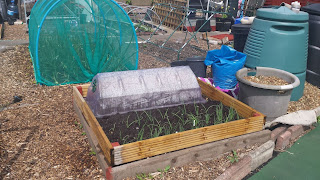 Bed 16 Onions from the other direction
Posted by cadalot at 07:28