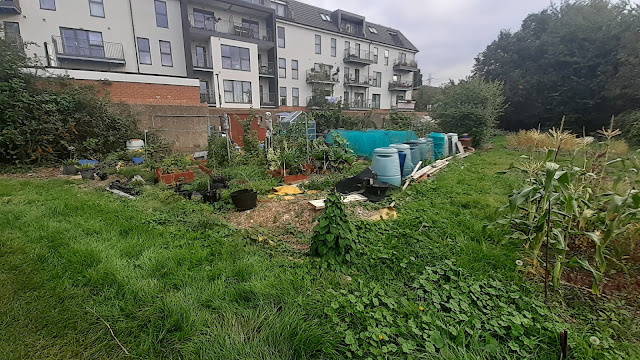 Above is a view of Plots 1 & 1A (Avalon) from the water standpipe looking at the corner formed by the main path going left and the path between plots 1 & 2 going right. The bind weed has taken itself up the corner post and will be treated with weed killer next visit. 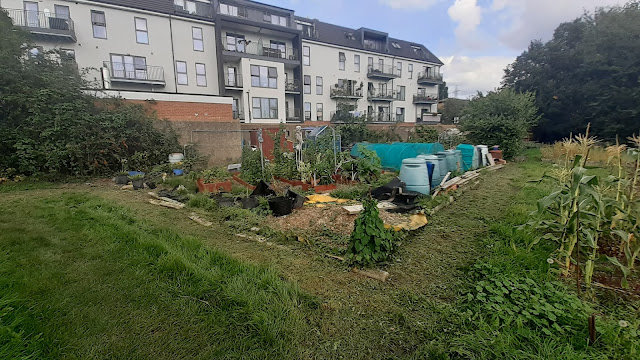 Above is the same view after strimming and exposing the kerb stones that idverde  caught with their mowing machine and dragged along the plot. It's one of the reasons that so far I have not stood them up.  I'm thinking I may have to make a mound perhaps using some of the timber and lay the edgings on top to make them a little more visible. 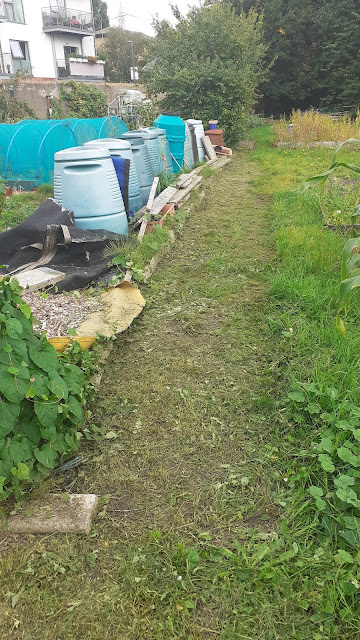 One can see how far the kerb edgings were shunted along the main path during the last main path cutting by idverde early last month. 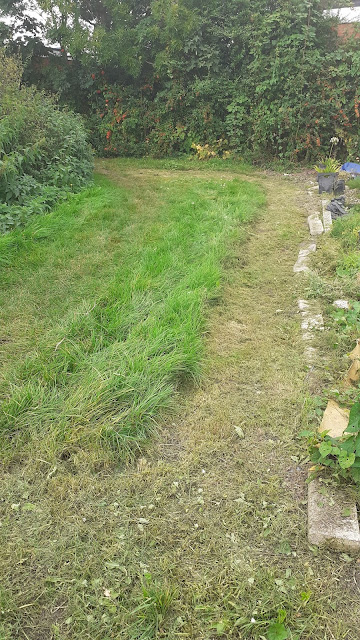 I have exposed the kerb stones and trimmed the main path and in the background you can see the strimmed area off the main pathway into my plot 1 entrance and paved pathway as now we will be getting dew on the grass and I will be able to carry on wearing trainers and not have to put boots on. I also strimmed a pathway from the corner of the plot to the stand pipe and water dip tank.
I have bought 100 tete a tete Daffodils' that were on offer from Suttons and the ultimate plan is to place them along the path for an early flash of colour and food for the bees. 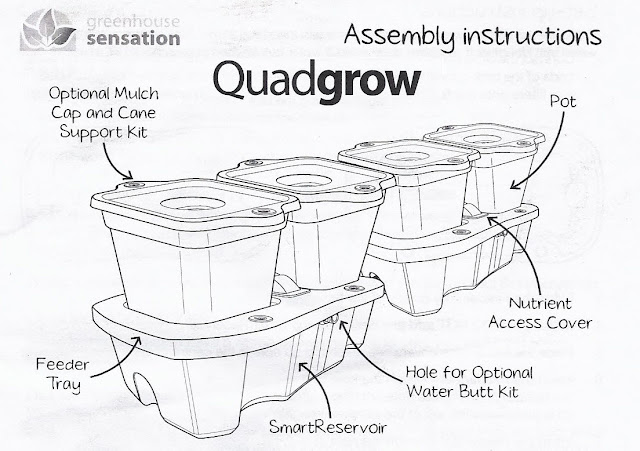 When I removed the Nutrient Access cover to the Quadgrow along the gable end of the greenhouse I found that the Smart Reservoir was empty but the bottom was not quite dry. We have had a few very hot days this last week during the Indian Summer which is obviously the reason the reservoir only lasted 7 days and not the usual 10.
Note to self:- Make sure you check every 5 days during summer and hot weather.
The shed was hit next as too much had just been stacked in there following bringing the bookcase down to sort things out. It was nice to clear the bench and have the little cooker available once again to make warm drinks, I'm going to need that facility over the Autumn and Winter months as I work on the infrastructure and get primed for next years growing season.
I found an empty tin for the Green Manure seed to live in away from any mice that may want a feed during the winter. I harvested so many cucumbers, tied back wayward Raspberries harvesting some for the wife to eat. Had a chat with Wally and John as they arrived on the Plot. Shared some Cucumbers with Michelle, exchanged greetings with other plot holders as they came and went during the morning and before I knew it my five hours on the plot were at an end and I needed to make my way home for my Sunday dinner.
Posted by cadalot at 18:00