Lunch time visit to water the spring onions with comfrey tea and harvest two cabbages. Basil was poking around my plot but scarpered when he saw me coming, he knows if I get near enough he will get a boot up the jacksey. 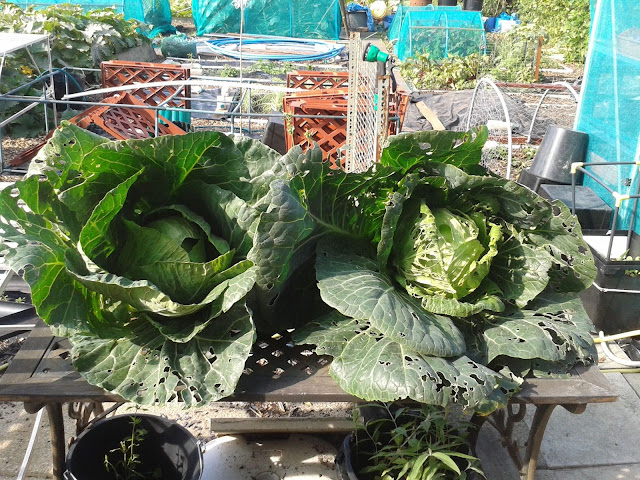 Took the netting up and pulled all the weeds that have grown around and near to the cabbages in bed 13. I wanted to do this because something has been having a go at them and that something turned out to be slugs.

So a number of the orange monster got snipped in half as I cleared the lower leafs so that I could sprinkle blue pellets of death for any that jump off the cabbages they are already eating or try to get to my cabbages.

I cut all the outer leafs of the cabbage up and put in Dalek 2 which is composting well and the level keeps reducing at breakneck speed, added a layer of comfrey leafs, a layer of spent compost, more cabbage and more comfrey. Then wet it down and slapped the lid back on.

Saw another or possibly the same little mouse again running around, I think he has been finishing off the corn that I have not got around to adding to the compost bin. I've seen the magpies having a go at my neighbours corn.

We ate Kelly's peas yesterday (that's why you can't see them in the background of the photograph), she was not impressed and I do have different peas but I liked them. Shame there was only enough for two if us but next year I have bigger plans and will be planting half a beds worth.

Note to self - blue pellets of death in the sprouts and cauliflower beds next visit
Posted by cadalot at 18:00