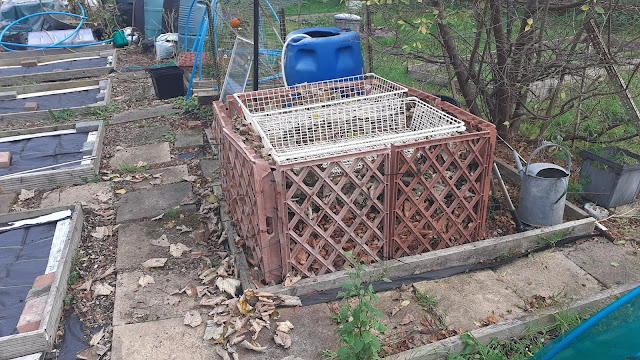 A good morning on the plot, a little cooler than last week with warnings of sub zero temperatures next weekend. I was up bright and early and down on the plot by about 8:14. Today I originally had two prospective plot holders coming to view the two now vacant plots on the site. I sent a message to the first couple that I had arrived and then got on with the task of gathering leaves from the drop off and pick up area (aka the car park, but we are not allowed to call it that) and filling the leaf cage to the brim.

I watered and damped down as I gradually emptied each wheel barrow load and then finally placed the metal mesh trays on top to stop them from blowing out of the cage.

Magda and her husband arrived a little after 9:00 and we proceeded to look at both of the vacant plots 14 & 7, both have their pro and cons and they quickly decided on taking over plot 7&7A as they were looking for a full plot and one half is already an established orchard with trees and fruit.

I saw the lonely green Dalek offered on Freecycle Saturday night and asked the poster if I could have it, and he said come and get it. Turned out he was in Wallington where my daughter and son-in-law live, so I messaged Andy and asked him if he could collect in his van on his way to the plot this morning.

So I now have two additional Daleks standing behind Dalek Army 1, waiting to get in line with the rest of the other Green Daleks. One will replace the rotating Dalek and the other a black one that has gone brittle and seen better days.

Andy and I sawed a broken Water butt down that is going to be filled with sand and used to grow bugs bunny type long carrots. Its standing under the lighter Dalek which will be it's home once the Dalek is moved into its final location.

The second person on the waiting list Rachael could not come as she has caught Covid, but have said they will just take the plot as they have been on the list a long time. They asked me to take photos which I did and sent them over to her. 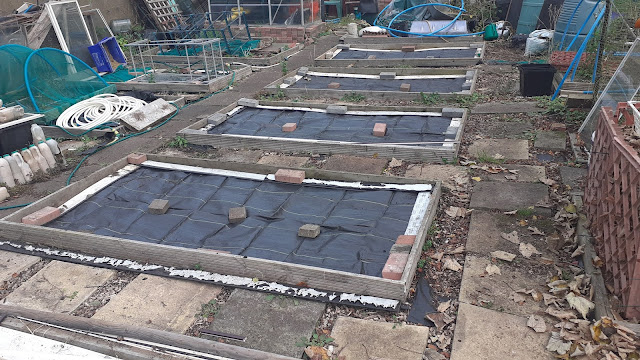 Andy worked on weeding and putting beds 8-11 to sleep for Winter. The planting membrane has been folded up and stored but as we have no running water at the moment to clean them, I may take the Worx hydroshot down and connect it to a water butt and jetwash the planting membrane. 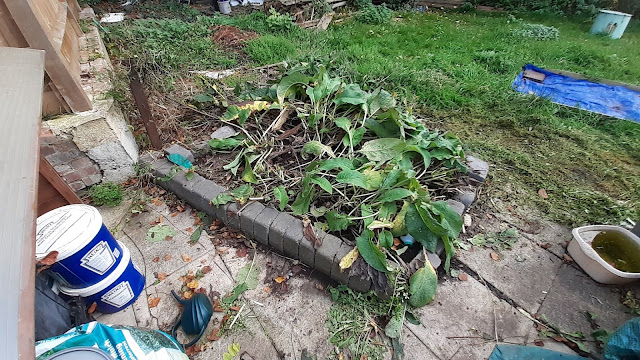 I attacked the comfrey bed and cut up a number of plastic trug loads that went into three Daleks on plot 1A and two Daleks on Plot 1. I also brought down a 10 litre bucket of shredded paper with me this morning that was deposited in a Dalek on plot 1.
Over the Winter I will be gathering as much brown material as possible so that when the green starts flowing again I have browns to add as well. 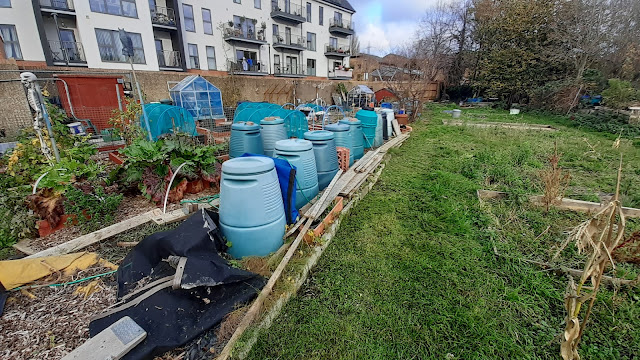 I took the Ryobi strimmer with a 4Ah battery to the path between plots 1&2 which should now be it's last cut until spring. I managed to cut the full length of the plot and the battery lasted about 20 - 25minutes.
Now the grass has been cut, it will allow me to transplant the Tulips and Daffs from the bed on the plot and put in the 100 Daffs I bought a little while ago when they were on offer down the path for some spring colour and some early food for the bees should the venture out on a warm Spring day next year. 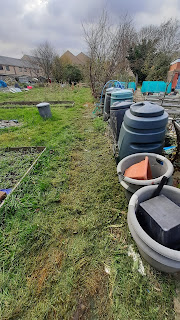 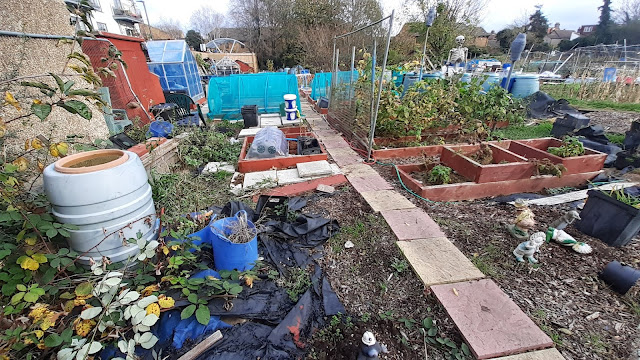 Andy and I moved the the mesh panels from on top of the timber up against the scaffold tubes on the Raspberries, so that I can now get at the section of ground between the Square Foot Gardening Beds and the stacked timber, to weed, membrane and lay the paving slabs behind. 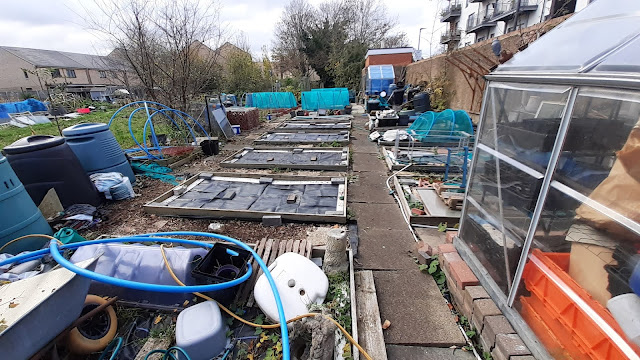 We moved the two greenhouse frames from beside bed 11 and placed them just behind the Dalek Army on plot 1. I started cutting down the self seeder, tall tree down that was growing in front of my first apple tree on plot 1A.
John as always was looking for materials for his oil drum fire and told me to stack any timber I want to dispose off at the end of my plot.

In the photograph above the items stacked on the beds on the right of the path need to be sorted, thrown or repurposed so that the beds are clear ready for next year. The bed that has all the buckets and milk bottles of sand on will go to the cut down water butt once I have melted or drilled a few drainage hole in it. I did remove the tap so I know that along with the crack in the bottom of the water butt there is a way out for the water.

I want to make up some cold frames over the Winter months to fit the secondary glazing panels I have to use on the beds and help warm up the soil and get a faster start sowing and growing next year.