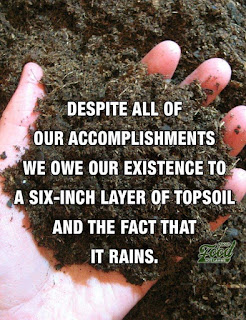 'Keep soil alive, Protect soil biodiversity' is the theme for World Soil Day 2020. It is important for people to understand that our food security depends on healthy soil.

Soil is home to more than one-fourth of the Earth's biodiversity. World Soil Day on December 5 is one of the key dates on the UN calendar when outreach activities globally try to bring governments, businesses, non-profit groups, scientists and the people on the same page to understand the causes of soil erosion, soil pollution and how we can encourage soil conservation at the local level.

World Soil Day 2020 will be different from other years as most interactions and discussions will be online due to the pandemic situation. Controlling soil pollution is critical as micro soil organisms working continuously for preserving our ecosystem perish and bad soil management affects life below the ground.

World Soil Day became an international day after the International Union of Soil Sciences (IUSS) recommended it in 2002. Under the leadership of Thailand and within the framework of the Global Soil Partnership, the Food and Agriculture Organization (FAO) supported the formal establishment of World Soil Day. The FAO Conference unanimously endorsed World Soil Day in June 2013. It even requested its official adoption at the 68th United Nations General Assembly. As a result, in December 2013, the UN General Assembly responded by designating December 5, 2014, as the first official World Soil Day.
The day also corresponds with the official birthday of King Bhumibol Adulyadej of Thailand, who had officially sanctioned the event. In 2016, this day was officially recognised in memory and with respect for the monarch after he died in October 2016 working as the head of state for seven years.
Nature Doesn't Need People
People Need Nature.
Nature is life: Every breath you take, every drop you drink, every bite you eat — it all comes from nature.
Posted by cadalot at 06:00

Email ThisBlogThis!Share to TwitterShare to FacebookShare to Pinterest
Labels: Soil