I received a private message on one of the forums "I'm thinking about planting my spuds under weed membrane - has it worked well for you? If so what size holes and what spacing were you using?"

So I thought I would gather all the information about how I plant my spuds into a single post that I can point people to when they ask the question in the future. 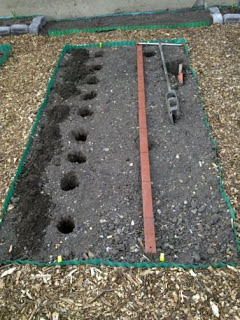 Originally back in April 2013 my first year or growing on an allotment, I decided not to grow potatoes in the traditional way i.e. trench cover and earth up.

I marked up a 2.4m timber with the centres for the potatoes, 240mm and used the Auger to dig neat 75mm holes 150 - 200mm ish deep - and handful of compost and then popped the potatoes into holes, covered with compost then a layer of native soil. 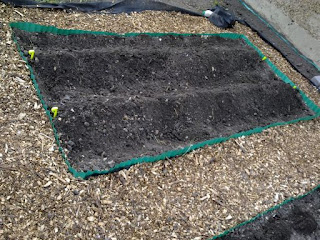 I then racked up the soil as we had a frost the previous night, as I had read that some people pre mound their spuds and I thought it may offer a little more protection. 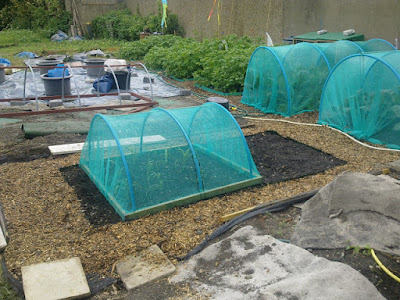 So on the back of the photograph you can see the four potato beds in June 2013, but in amongst the potato Haulms, the stems or potato foliage above ground were lots of weeds. It was during this first year that I mentioned to a work associate that I had an allotment and he informed me that he had been a plot holder for many years and sent me photos of his weed free spuds grown through weed membrane as he hated dealing with the weeds.

So I decided the have a bash at it in 2014 and decided to make a sheet a bed size 2.4 x 1.2m and cut the holes for planting the spuds and for the Haulms to find there way out of the ground. Potatoes are not stupid the foliage wants to find the fastest way to the surface which is straight up. The weed membrane keeps the moisture from evaporating too quickly in very hot weather and the sun beating (OK it's the UK) occasional shining on the soil via the hole in the membrane, it draws the foliage to the surface and the hole in the membrane.

So that second year, I decided to use the same configuration in the weed membrane as I had the first when planting without membrane. That's the layout on the left, the hole diameter is 100mm as I have a soil hand Auger that is 75mm dia and I needed a little tolerance. last year I created the weed membrane layout on the right for second early where the recommended distance was less and the three holes with crosses had pop bottles with pin holes sunk in the ground head first, so that I could water at depth. Its easy to extend the height of the pop bottles by cutting them off at the bottom and stacking them upside down as the Haulms get taller.

As my soil is clay based, I use the Windowed Auger head below. I only have this bit of kit as I use it for taking soil samples for work as a structural engineer, my neighbouring plot holder uses a long handle bulb planter to plant his spuds 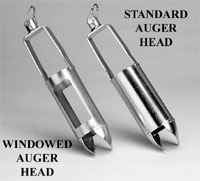 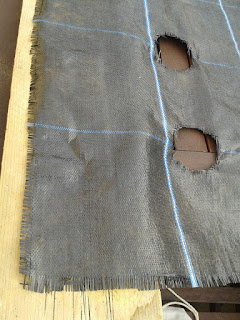 This is the amount of fraying that took place in a single year, and I decided to trim and fix the sheets by using a soldering iron, from that day on I have cut all my new sheets using the soldering iron as it seals the edges and you don't end up with shaggy weed membrane. See my post Planting Membrane 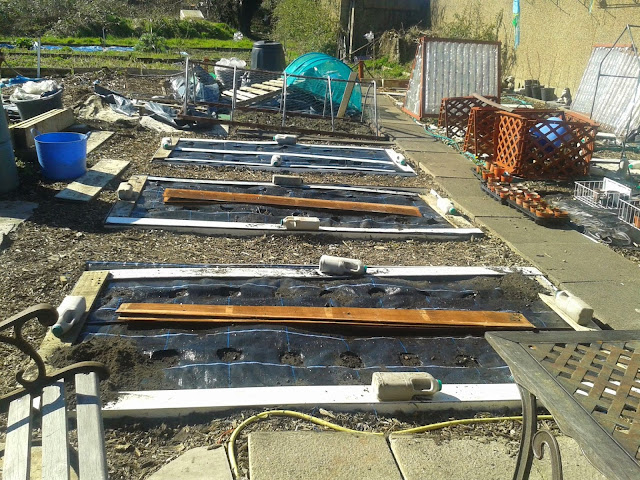 So here was the potato beds in 2014, I had managed to acquire quite a lot of plastic trim from the window replacement company that was moving to make way for the housing development. I replaced the green lawn edging to the beds, that went brittle in the second year with plastic trim and I also used it along the length on the edge of the membrane placing soft bricks, i.e. milk bottles filled with sand on it to stop the weed membrane blowing away. That's pallet wooden slats either end of the bed, and some scrap timber in the middle.

Using the weed membrane on spuds, I would say it has worked very well for me. I very quickly made specific sheets for Sprouts, Cabbages, Cauliflower, Sweet corn, and this year I'm also using them for Onions, Spring Onions and Beetroots, the less weeding I have to do the more I love my allotment.