My Daughter is around to look after the wife this morning and it's supposed to be dry so up early, breakfast and on the plot by 7:30am until 1pm when she is leaving to see her friend.

Photo above is how I left the allotment today and the photo below is how it was at the end of play last weekend. I like to record progress as it's too easy to get despondent that you have not achieved what you think you should have. I'm now 62 but in my head I'm still that 23 year old, with boundless energy who worked at about 2 - 3 times as fast as my body will now allow.

I've weeded around the outside and the inside of the two last bed frames that were installed by my Daughter and Son-In-Law during lockdown. I've cleared back the weed membrane along the leading edge and have weeded and laid path weed membrane and made a woodchip path. 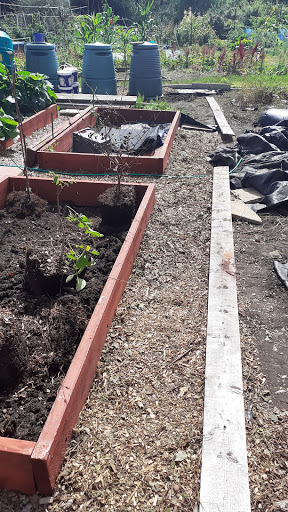 The trees that have died have been taken out of their large buckets and the soil will be used on the bed to bring the levels up as at the moment the paths are higher than the level of the beds, and that will never do. I have compost made last year that I will also add to the bed. 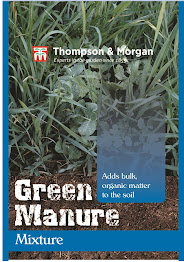 I intend to sow a green manure mixture which will add nutrients and nitrogen fixing bulky, organic matter (Humus) to the soil. This will help to improve fertility and soil structure and will also act as a cover crop for 40 - 90 days whilst it grows to about 230mm or 9 inches or taller before it is cut and dropped and left for the insects and worms to take it down into the soil.

I can either scatter the seeds over the soil surface and carefully rake it in or alternatively sow thinly about 12mm or 1/2" deep, in narrow drills which are  150mm or 6" apart. During dry periods it may be necessary to water until the green manure establishes 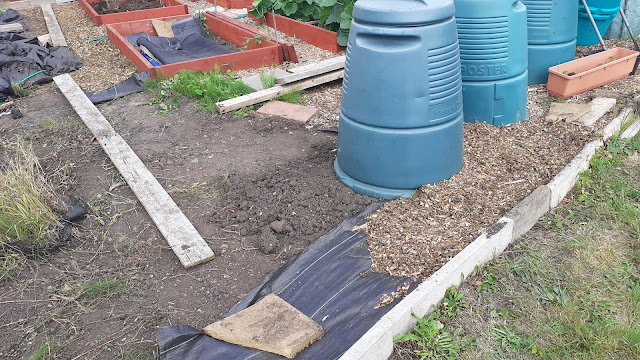 I managed to start clearing the area along the boundary and have dug and removed the roots from Couch Grass, Bindweed and Mares tail along the edge and under the new Dalek that my Son-in-Law picked up for me a couple of weeks ago.

I moved the two incinerators to the hard standing/ paved area at the end of bed 13 on Plot 1A.

The two Daleks stranded in the middle of no mans land need to be brought in line with the other Daleks once I have dug and weeded where they are going too stand. I need to charge the strimmer's battery and knock down the vegetation along the path and work my way to the corner of the plot on the main path.