I Feel The Need, The Need For Seed 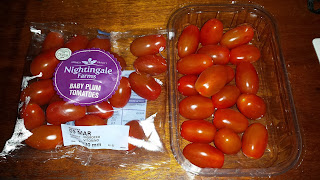 As it's Winter and I don't have any tomatoes growing or ready for harvest we have been buying baby Plum tomatoes from TESCO and the wife and I quite like them.

The packaging says they are exclusively for TESCO that they are produced by Nightingale Farms, the Variety is called "Vitorino" and they are a produce of Morocco and are between 20/30mm.

I don't appear to be able to find seeds for "Vitorino" anywhere, then I was pointed to what happened with Rosada by a member of the Grow Your Own forum Grapevine. It would appear that Colin Randel, vegetable product manager at Thompson & Morgan, explanation provides an interesting insight into the sort of shenanigans that determine what plants we can and can't buy.

He says: “ 'Rosada’ proved extremely popular with our customers… the taste was outstanding. Unfortunately, as a variety from the Far East, its registration for the EU Common Catalogue was not undertaken, as neither of the two main obstacles could be adhered to. Either a seed production needed to be organised within the EU, or a strict 'growing season documentation and phytosanitary certification’ to allow importation had to be arranged. The breeding company would not agree to either requirement so we had no option but to discontinue. We had to go back to major trialling, resulting in the introduction of 'Santonio’, a slightly smaller-fruited 'Santa type’, which has proven popular.”
So there is a good possibility that "Vitorino" which is likely to be a F1 also cannot be sold in Europe.
So I have harvested seeds and they will be fermenting for a couple of days, then they will be sown with the others I have planned for the portable grow stations. I know that you may not get plants that are exactly as the original but sometime you find that what you do get is better and a little more tasty. I've been growing Crimson Crush from kept seeds since I got a plant when they were first introduced and every year they provide a nice tasting tomato.
Posted by cadalot at 15:47

Email ThisBlogThis!Share to TwitterShare to FacebookShare to Pinterest
Labels: tomatoes