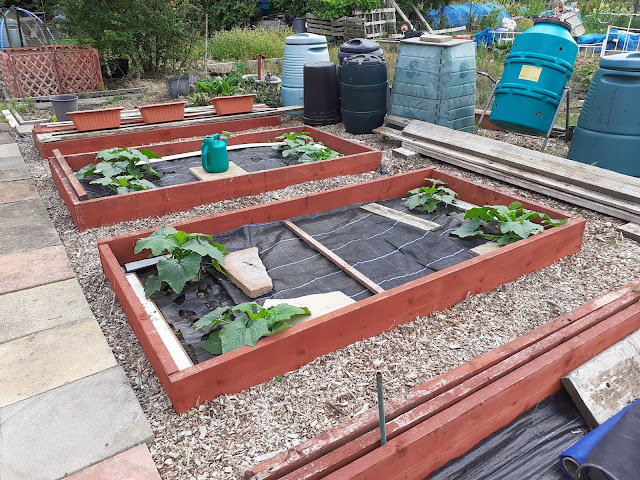 My daughter Kelly is around an about today so a weekend Saturday visit rather than a Sunday visit. I was down on the plot by 7:30am and my legs managed to hold out until midday when they and my stomach were telling me to go home for some lunch and give my legs a rest.
The photo above is the Thompson & Morgan new Squash varieties which are an alternative to Mash & Baked Potato. I had to water the four beds of squash ( two more beds up on plot 1A) and the Parsnips using the water in my greenhouse water butts and a watering can. 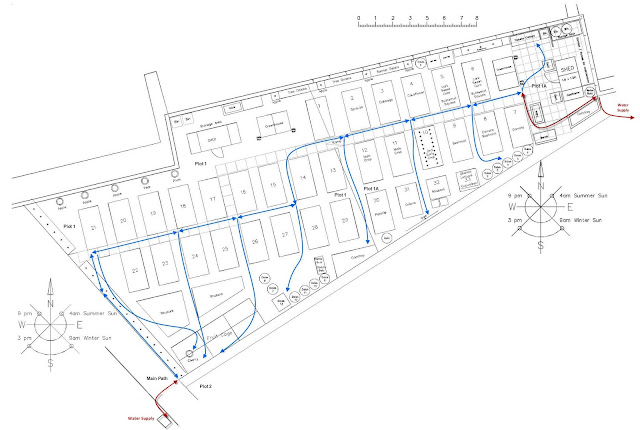 Unfortunately for me where people have been disposing of weeds along the front of the bees and combined with the long grass that has not been cut around the dip tank and water tap the end of my hose that I had buried across the path and taken to the tap was lost.
I did try looking for the hose at the far end of the path and cleared the build up of weeds, but had forgot that I put a large radius on the other side of the path and was clearing in the wrong location. In the end I lifted the end of the pipe from my plot and had the whole lot up again to expose it. I will take the drill and the Power Planter auger with me and bury the whole pipe up to the tank and cable tie it to the tap/ tank so it can't be lost again should I have to do another four months shielding come the second wave of the virus. 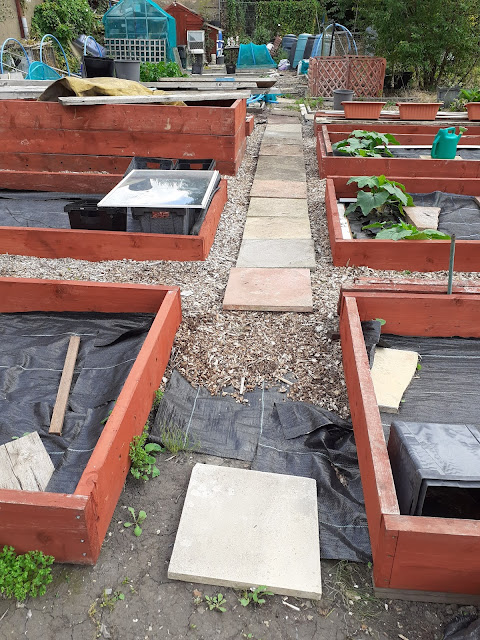 Despite the sun, it was a nice sunny day and got to about 24C today, I humped the slabs from the pile I had stacked in the corner of Plot 1A / Plot 1 near the path between Plot 1 & Plot 2. I show where they were in the Plot Tour video below.
I harvest two 10 litre buckets worth of apples that my daughter is going to get creative with and I'm looking forward to some apple crumble and apple pies coming back to me. 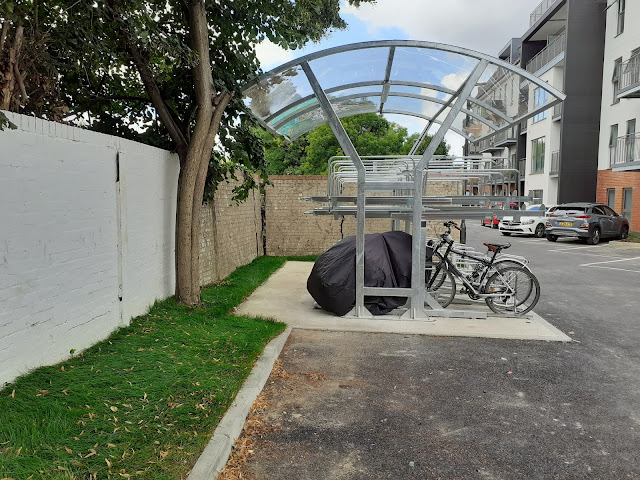 I could not resists looking on the other side of the wall behind the shed on plot 1A to see how close the bike rack is to the wall that the contractor still has not done anything too and is leaning towards my shed. 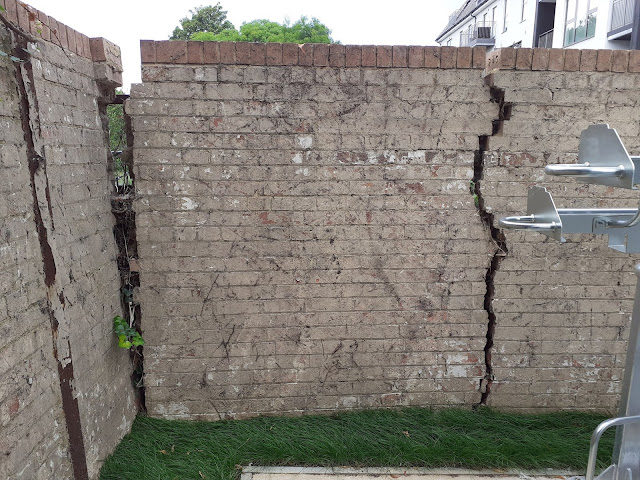 I will be chasing the council again re this wall hopefully something will be done before it falls and wipes out my shed and its contents In fact I think its only the rack I have behind it that is abutting the shed that is propping the wall up!
Not many plot visits since my last plot tour, but here is a video for you. I really need to invest in a camera that has a stabilisation feature, I have tried using some software to steady the footage but I think it's more likely to make people seasick.
Let me know what you think of the result of the software Vs a phone shaky video.
Posted by cadalot at 10:00 No comments:

Reviewing the diary over the last seven years for August

2013 - Built my first Comfrey Pipe after making it in buckets and experiencing the stench, harvesting spring onions, radishes, Wyevale seeds at 50%, trouble getting a fork in the ground used a pick axe. Central path of paving slabs from front garden went in on Mill Green. Wyevale 50p seed sale

2018 -  Harvesting so many tomatoes from the three tomato plants on the allotment. Second beetroot bed planted up first week of August. Finally have the stove in the shed and can make coffee. Harvesting cabbage and cauliflower. Pickling Beetroots. Harvesting cucumbers, courgettes, runner beans.  Built the rear extension to the shed on plot 1 .Drying tomato seeds for seed circles. Harvesting potatoes and tomatoes. Picked up packs of seed from the Wyevale seed sale. Started to review my seed box for 2019.

2020 - August is normally the month for harvesting
Below is the to do list in no particular order and catching up with what actually happened in July and what has slipped. The plan is now to get a few late crops in and to work on getting the plot ready for next season.
Coronavirus UPDATE
Early into March I ended up self isolating because my wife is very high risk and from the looks we were in isolation for a lot longer than the 12 weeks.
My first visit to the plot was on July 21st Fathers Day with my second and third visits taking place on Saturday 4th and Sunday 5th July to plant out the Baked Potato and mashed Potato Squash and some Butternut Squash.
To Do List
Below is the to do list in no particular order of what has slipped
Mill Green - Plot 1A
Mill Green - Plot 1
Home
Reminders
Posted by cadalot at 06:00 No comments: