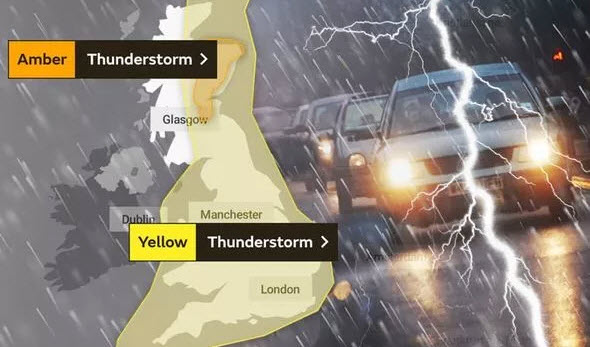 Yellow thunderstorm warnings have been issued for much of England, Wales, parts of Northern Ireland and southwest Scotland, with the potential for lightning, heavy rainfall and hail.

It comes after temperatures above 34C were recorded for the sixth day in a row in parts of southern England, for the first time since at least 1961. Yesterday afternoon we heard the thunder in the distance and the temperature did drop a couple of degrees early evening. This morning I had planned to get down to the allotment by 6:30 and back again by 8:00 taking many buckets of apples to the Plot 1 Allotment Dalek for composting. 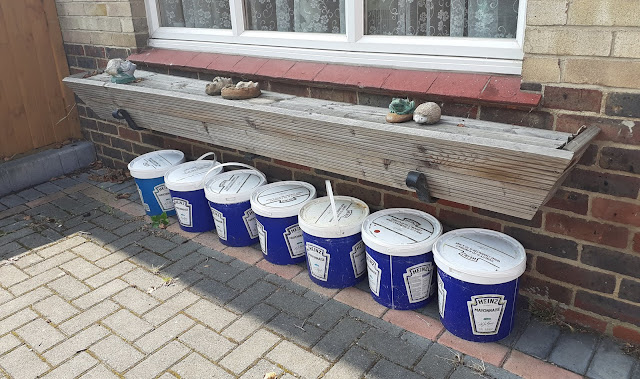 I had just taken the buckets from the back garden to the front as the rain came, and I ended up stacking the buckets along under the ark (window box) to try and keep them dry. So for the moment the drop off will not happen as I'm expecting a parcel today at anytime between 8am and 6pm. The photo above was taken midday, the rain lasted about and hour and then the sun just dried everything up and it was as if nothing had happened apart from a great reduction in the temperature compared with the last six days.

The yellow thunderstorm warning for Wales and most of England - excluding the north east - is in place all day on Thursday, when sunny spells could see maximum temperatures of up to 32C (90F) in the south east. Northern Ireland and southwest Scotland may experience power cuts and flooding during thundery showers in the morning, with the weather warning due to lift before midday.

Thames Water said that ongoing power supply issues in Guildford meant it was using tankers to bring water into the area, as it urged customers to use water for essential purposes only in the coming days.

Essex and Suffolk Water said that due to "record water demand" it was working to maintain supplies but users could notice lower than normal pressure.

An amber thunderstorm warning for most of Wales, the West Midlands and parts of the North West was issued by the Met Office on Wednesday evening after severe thunderstorms causing flooding and disruption.

Gloucestershire Fire & Rescue Service said it was experiencing "high call volumes" due to bad weather and had been made aware of flash flooding in Gloucester.

Some 10 flood alerts covering areas in the West Midlands were issued by the Environment Agency on Wednesday evening, alongside three flood warnings - meaning immediate action is required.

Two of the warnings, which indicate flooding is expected, covered the River Trent, while the third was issued for Sandyford Brook in Stafford.