Meeting with Adam the man from the Council

I took another three buckets of spent compost, six buckets of Apples and one bucket of kitchen waste to the plot this morning, as there was a meeting on site with a number of plot holders who have worries and concerns that needed to be addressed by the local Authority and Idverde or that Adam Brind LBS Neighbourhood Manager is already dealing with, below are the notes that have been uploaded to the Mill Green Allotment Facebook Group for those that couldn't attend.

Regarding the unstable wall behind the shed on Plot 1a (Alan) and on the side of Plot 2 (Adi) the council still have not had a cost estimate back from their contractor to consider making remedial works and replacing in brick. Adam to chase the quote and to advise when they intend to replace the damaged wall and what materials they will be using.
The broken timber fencing at the rear of plot 2 is to be replaced when the remedial works to the wall on plot 1A & 2 is undertaken. The opening in between the tree between the metal gate and the fencing in the drop off and pick up area will also be dealt with during these works.
Plot 3 (Paddy) and Wally Plot 4 (Wally) have concerns re the large self-seeded Ash tree on Plot 3A that overhangs their plots and the roots are robbing their plot of nutrients. The Ash looks to be dying and Adam has requested a Council Tree Officer look at it. This still has not happened and he is to chase the Tree Officer to report their findings as to if the tree needs to be removed on health and safety grounds as the council will not remove a healthy tree and we are informed they have no money for allotment tree maintenance.
Regarding the availability of water taps and dip tanks, after complaints from a number of plot holders the site water hogger who has multiple hoses from two taps with splitters on has been spoken to by Adam and reminded of the guidance re hoses not being left unattended and the time restrictions and how to play nice with others when using and sharing water.
Adam suggested applying for funding to have additional taps and dip tanks installed; however in previous Allotment Rep meetings this funding is only available if there is an association on the site. I have floated this idea in the past and individual plot holders have appeared interested but if we are to do this we need 10 plot holders and it will cost £3 each. If we are going to do this then I suggested we become members in October when our rents are due.
Adam was reminded that plot 9 with the Japanese Knotweed has not been treated yet this year and that there is Japanese Knotweed coming up in Plot 10 (John's) Greenhouse which has been left to be treated.
John requested permission to trim back the tree to the front of plot 9 to give him more sunlight on his plot and as it's the opposite end of the plot that has the Japanese knotweed and it is not tenanted Adam has granted permission.
If there are any plot holders who are considering giving up their plots from the 1st October please let me and Idverde know as last time I was told we had six people on out waiting list for a plot and I would rather get new plot holder on the site early so that they can clear weeds get ready for the growing season.
There are a number of plot holders who have debris on the main path or are not keeping overhanging trees and foliage from invading paths between plots. Adam is to request Idverde write to these individuals and serve them an improvement notice. He also remarked on the high weeds on plot 14
Recently people have been found on the site wondering around the plots. They were challenged and were requested to leave the plots and informed that if they were not plot holders or the guest of plot holders then they were not welcome on the site. Living in the new block behind or the houses beside the allotment gives no automatic rights of access unless they are also a plot holder.
To make the site secure we are now to adopt the same rules as the other LBS Allotment sites and locking ourselves in when entering the plot and locking on leaving. The logistics of this were discussed with Adam and it was agreed if one is unloading lots of materials from the car to the plot or barrowing woodchip from the drop off and pick up area that the inner gate can be left open whilst your going backwards and forwards moving materials, but when that stops you are to lock the gate. 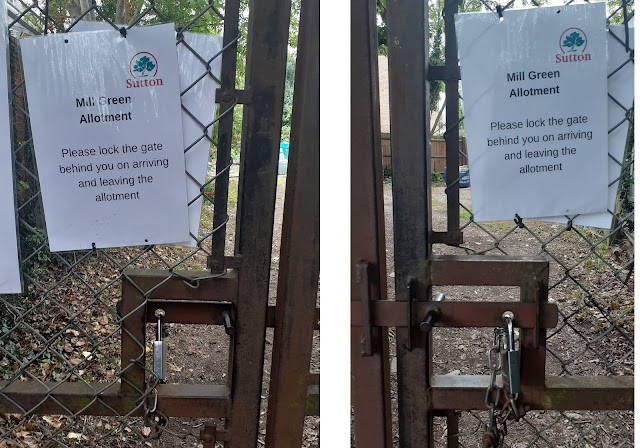 To this end Adam has placed notices on both side of the metal gate into the plot.
Some of our lady plot holders already lock themselves in the site when no one else is in attendance as it makes them feel safer. On arriving on the plot please make your presence known by shouting out “hello” to anyone you see on site and likewise when leaving please say “goodbye”. 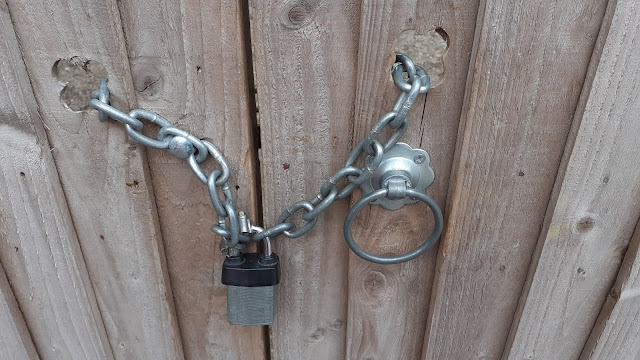 If you are the first to visit the plot obviously unlock the timber gates to the drop off and pick up area. It was agreed that although just about doable the way the chain is at the moment the timber gate can be closed but left unlocked whilst people are on site as the inner gate will be locked from now on to prevent trespassers. If you are the last one leaving the site please lock up the timber gates. When you do so please put the padlock on the very last link as if someone is accidently locked in then they can still get at the padlock and undo it from the inside, see photo above.
Posted by cadalot at 20:01