Over the last couple of days the temperature has really dropped and whereas normally I would visit in a tee shirt today a fleece was required for warmth first thing and until the temperature and exercise warmed me up. It rained most of yesterday so not really a day for digging as a bit stodgy.

The Thompson & Morgan Baked & Mash Potato Winter Squash plants just seem to want to grow and grow. I did take a look inside and the squash is just starting to grow behind the flowers and there are a lot of flowers under the canopy of leaves. 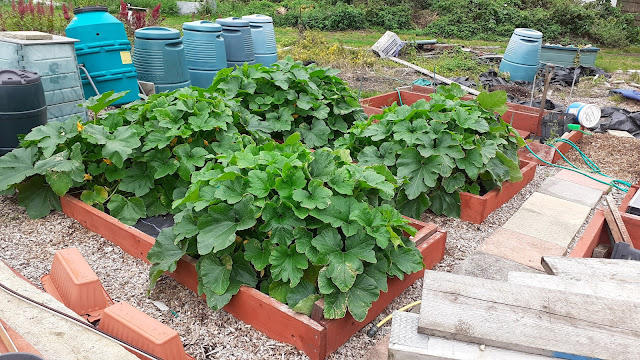 The foxes have knocked over the two planters of tulips onto the path. I will leave them there until I bring the Power Planter down to drill some holes along the foot path kerb stones and transplant all the daffs and tulips from bed 13.

Now that I own Plot 1 I don't really have to use the path between Plot 1 and Plot 2 to get to my original plot 1A which is in the back corner. The path doesn't usually get used much by my neighbour until April/May when he comes and clears all the weeds that have grown ready for planting each year. I'm hoping for a good splash of spring colour and to provide some food for any bees that venture out early. 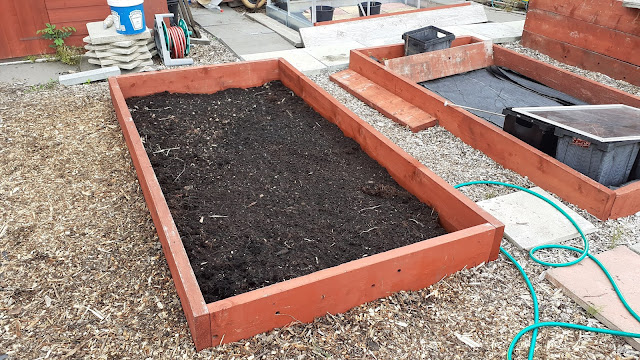 I bought some kitchen scraps and three buckets of apples, plus another three 10 Litre buckets of spent compost from the new potatoes and spread it over the bed next to the plot 1 shed. I then raked the compost level and sowed and watered in the Thompson & Morgan Mixed Green Manure mix.

As the last remaining buckets of new potato and tomatoes are harvested at home I will bring down the compost and cover each new bed with a layer and plant green manure.

A tidy at the rear of the shed was in order as I could not get down the back to access the wheelie bins. I sorted out the path weed membrane and they are all now stored in one location for ease of access. Timber donated to me for shelving in the shed was moved to the rear covered store.

I rescued a sheet of twin wall polycarbonate sheeting and placed it on the left slope of the shed on plot 1 on which the roofing felt has ripped and the water is now saturating the roof sheeting. I can't look in there to see the damage as it's a health and safety risk if the wall behind decides at that moment to collapse. The Council really need to sort out the wall behind as I will not have a shed to play with if they don't take their fingers out soon.

A tidy of the inside of the shed also took place and I managed to find a couple of hose pipe ends that I bought last year for this year. Now I will be using those next year as there is no point having a complete watering system in place as I have very few crops in the ground due to Covid-19.

The weeds have once again decided to take over the patio area, so they got a treatment with weed killer. I don't like doing it but I can't keep on top of the weeds and put in new infrastructure.

Now I'm not shielding the wife, it was nice to have a break and a cup of coffee with my sister-in-law on her plot halfway during the morning. Before I knew it, my time was done and it was time to drop off a sack of spuds at my sister-in-laws on the way home as she had bought lunch as was staying on the plot into the afternoon / early evening.