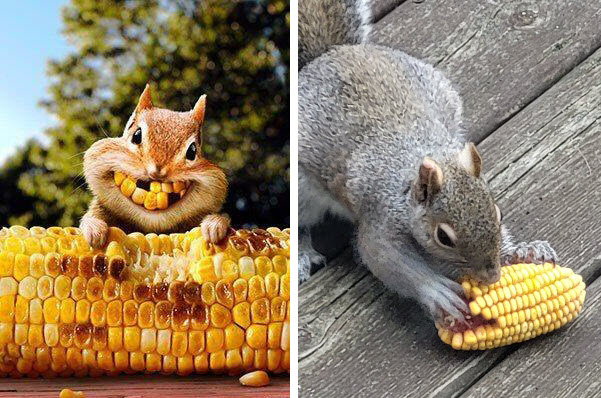 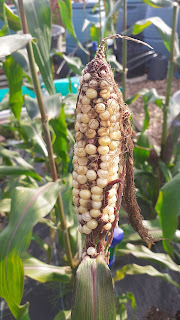 They are very sweet, aren't they? Those rats with fluffy tails that run along the wall on the boundary of my allotment, or I find hopping down the path of my plot when I arrive. That is until they completely strip a whole bed of sweetcorn on my plot, now I'm not so happy to see them on my plot!
I know, I know, if something isn't eating your vegetables then you're not really part of the eco system, and I'm happy for wildlife to share, but when the buggers take the bleeding lot that's a call for all-out war! or at least some preventative measures.
The later second sowing of sweetcorn I protected by covering the cobs with plastic pop bottles because they were on the turn but not quite ready for harvesting and eating by humans, and even the squirrels stripped the corns then though better of finishing them off. 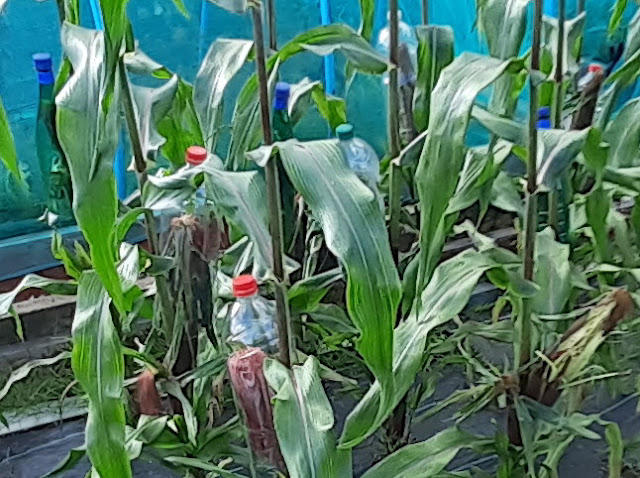 Two full 2.4m x 1.2m beds of sweetcorn and I ended up with only eight cobs! 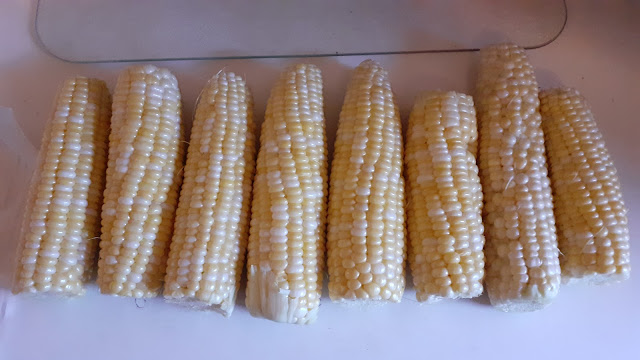 This last weekend there were a large number of young baby squirrels chasing each other in the trees at the back of the plots and one was in the process of pushing timber out of my timber rack to make a nest which is called a drey.
A dray is normally a compact, spherical structure. It is slightly larger than a football and constructed of twigs, leaves, bark and grass. I've actually found one in a loft of an old Victorian property I was working on and that one was massive.
Grey squirrels tend to breed in between January and April and, if food is plentiful, they may have a second litter in the summer, and they have not been going hungry on our allotment site, at least two other plot holders lost all of their sweetcorn as well.
I evicted the squirrel from my wood pile that has quite a lot of timber roofing battens in it. This now has me thinking.... 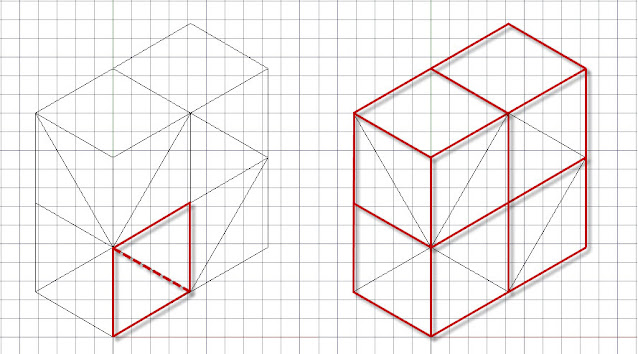 The beds are 1.2m wide by 2.4m long and if I make square timber frames up and brace them diagonally from corner to corner, I could then make 12 of them and cover them with chicken wire and fix them together with cable ties to form a cage. Sweetcorn is between 1.8 and 2.1m tall normally.
Two additional square frames would fill the top in and hopefully keep the little buggers away from my sweetcorn next year.
Thus, I need 4 x 1.2m length of timber for the sides and a single 1.2m x 1.414 = 1.7m length for the diagonal.
14 such frames means.
1.2m timbers x 14 x 4 = 56 number lengths
1.7m timbers x 14 x 1 = 14 number lengths
I think I need to see just what is in the wood pile during a future visit, before embarking on making these panels.
I've also been looking at perhaps replacing the timber element with Upvc conduit pipes and corner fittings, but they would not be able to be braced against any wind load and it's going to cost me.
Commercial fruit cages look to be way too expensive an option.
I'm open to any suggestions for other ways of keeping squirrels away from my sweetcorn in future. If you have any ideas, then please let me know?
Posted by cadalot at 06:00 No comments: 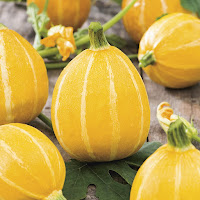 This customer favourite variety is back! Plants produce large crops of rounded, colourful and eye-catching courgettes.
Very popular in Italy, their shape makes them ideal for stuffing, or steamed whole. Packed with great flavour and texture, they are an excellent source of vitamin C

Sow indoor: for surest results, 1.5cm(½in) deep, on edge, in small pots of compost. Water well and place in a warm position. A temperature of 15-20°C(60-68°F) is ideal. Keep moist. Seedlings usually appear in 7-14 days. Gradually accustom plants to outside conditions (avoid frosts), before planting out 60cm(2ft) apart, when frosts are over.
Sow outdoors: for ease, where they are to crop, 1.5cm(½in) deep directly into finely prepared soil which has already been watered. Allow 60cm(2ft) between sowing positions. Sow two seeds on edge per position. Early sowings benefit from cloche protection. Thin to leave the stronger plant. Water well until plants are established.

British Summertime is the British bred courgette that will yield an abundance of fruit even in cold weather conditions. British bred and perfect to grow in a British Summer (dull and wet!) One of the earliest fruiting courgettes. The plant habit is an exceptionally open bush which improves air circulation, reducing the incidence of disease and fruit rot, allowing for the rapid picking of top-quality dark green fruit. Spine-free, so no scratched hands when you harvest.
Sow           April - June
Sow seeds singly (April - June) 25mm (1") deep into a 75mm (3") pots indoors or in a greenhouse at 18 - 25C (64-77F) Grow on and plant out in the garden after hardening off, when the risk of frost has passed leaving 600mm (24") each way between plants, alternatively plant in 450mm (18") containers. Can also be sown directly outdoors into warm well-reained, moist soil after the risk of frost has passed , sowing 2-3 seeds at 600mm (24") intervals and thinning out to the strongest seedling.
Plant Out   June - Aug
Harvest     July - Oct.
Height       610-700mm (2' - 2'7")
More Information
Water courgettes regularly - do not allow the soil to dry out as this will impair their development. Hoe between plants regularly to prevent weeds from establishing. Courgettes appreciate an application of a high potash fertiliser every two weeks during the growing season.
Hand pollinating courgettes is not usually required when they are grown outdoors. However, for indoor cultivation the female flowers can be fertilised by pressing a male flower against them.
Begin harvesting courgettes from midsummer onwards when they are 10cm (4") long. Regular harvesting will encourage more courgettes to be produced. Culinary note: Courgette flowers are edible and can be eaten cooked or added raw to salads. 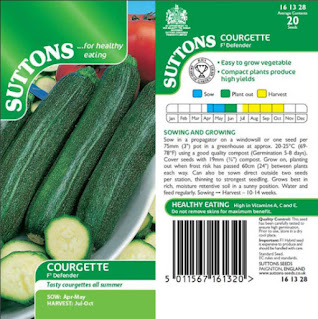 Email ThisBlogThis!Share to TwitterShare to FacebookShare to Pinterest
Labels: Courgettes, In My Seed Box

I had never eaten or tired Chard before, I didn't have a clue how to cook it. But I got a free pack off a magazine so I asked myself the question;

Do I buy some and try it before making my mind up about sowing it?

How many of you end up growing something you have never tried before because the seeds came free on a magazine?
The feedback I got from postings re this on different Facebook allotment and gardening groups was quite staggering, and I had planned to give chard a go in 2020, But again Covid-19 had other ideas about how I was going to spend my time.
Now I have the additional half plot and six full and two narrow beds on Plot 1, and three Square foot gardening beds planned, plus I've now tasted Swiss Chard I grew it in 2022 and I'm defiantly growing it again in 2023

Email ThisBlogThis!Share to TwitterShare to FacebookShare to Pinterest
Labels: Chard, In My Seed Box

What To Sow In October

It's October but It's still possible to over Winter crops under cover, that is to say in a Greenhouse, Cloche, Polytunnel or Cold Frame.

If you are lucky enough to have a Greenhouse, Cloche, Polytunnel or Cold Frame on your plot, then here are a few examples of what to grow.

Hyperlinks to more information on the variety, and to order seeds from various suppliers.

Small Print, I'm not on any form of commission or any form of payment by you using these links to order seeds. Just Grow and be happy! 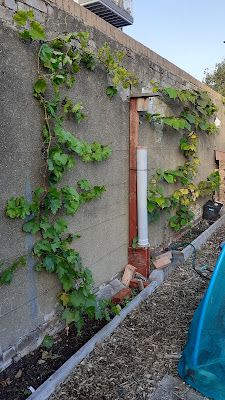 As with the Flame Red, it had put a growth spurt on since the heatwave stopped and the rain had arrived and really didn't have a manageable form on the wall.

The wall gets the sun all day and is an ideal location for grapevines. 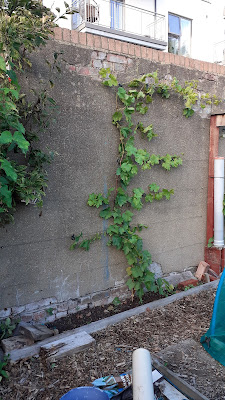 It got damaged by a fox or cat early on and is not as developed as its neighbour. There is room for a lot more growth from this vine next year to fill out the wall a little more, so I'm not expecting much in the way of fruit from it next year.

Generally speaking, a grape vine growing in your garden could take three years to produce a good crop of viable grapes. That said, there are several factors that will determine how long it will take for a newly planted grape vine to produce fruit: plant age and size at planting time, climate, sun, soil and other environmental conditions and proper pruning and other care practices. 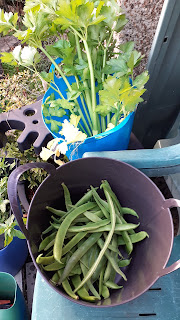 This year I grew Tango Celery Postiplus from Suttons.

I will be growing Tango again as they were so good this year, but it will be from seeds which are New to Suttons for 2023, here is the Link to the Suttons Tango seed web page.

£3.49 for 40 seeds, I will try and sow successively and from as early as possible, perhaps Feb under a cloche, March and April and the harvest is from the start of August to the end of October or first frost. 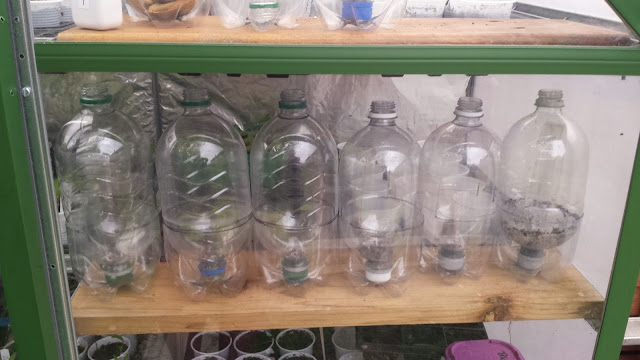 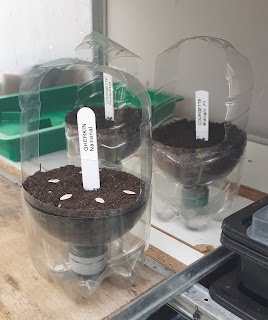 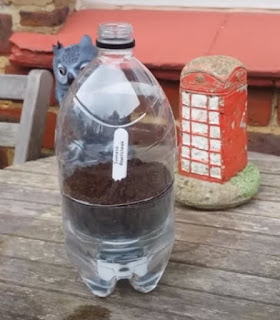 The water in the bottom of the pop bottle lasts quite a while and allows me not to have to visit the allotment greenhouse every day to water.
I wished that I had used these this year as I lost too many young plants to the heat wave and ridiculous 41C temperatures outside of the greenhouse.
For 2023 I'm going to be a little more prepared.
Posted by cadalot at 06:00 No comments: