I trimmed the grass back around the edge of the plot, and I'm thinking that getting the concrete kerb stones in would be a good thing as it will give idverde and myself something to trim against on the main path and the path between plots 1 & 2 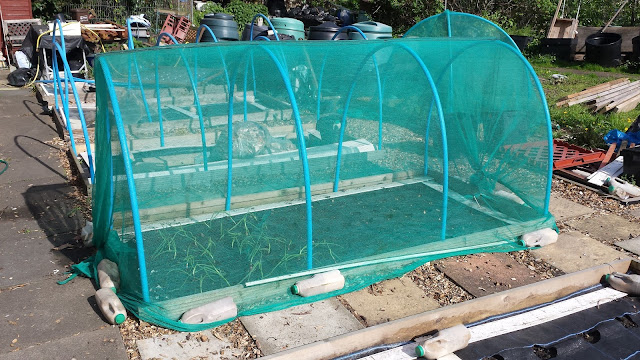 The two trays of red onions that were started off in modules went into the end of bed 10 and the rest of the red and white sets were sown in the planting membrane to hopefully keep the weeds to a minimum. I've netted against foxes frost, birds and allium leaf mining fly.

Richard Kelly & Ramona Boboc the Allotment Administrator from idverde visited to do an early site inspection and look at the general state of the site. It was nice to put a face to the emails and the voice. I'm hoping Ramona lasts she is full of enthusiasm and the other Site Reps are also very happy with her response time to enquires and finally the 178 people on the waiting list where there has been a site vacant and available for them for over a year are finally being processed and passed onto the Site Reps to arrange viewings of the vacant plots. I have someone coming this Sunday to view two vacant plots.
Posted by cadalot at 19:39

Email ThisBlogThis!Share to TwitterShare to FacebookShare to Pinterest
Labels: Onions