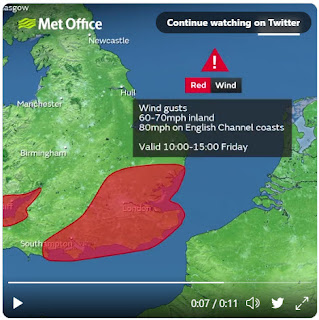 Met Office Chief Meteorologist Paul Gundersen said: “After the impacts from Storm Dudley for many on Wednesday, Storm Eunice will bring damaging gusts in what could be one of the most impactful storms to affect southern and central parts of the UK for a few years.”

“The red warning areas indicate a significant danger to life as extremely strong winds provide the potential for damage to structures and flying debris. Although the most exposed coastal areas could see gusts in excess of 90mph, winds will remain notably strong further inland, with gusts of between 60-70mph for most within the amber warning area, and up to 80mph in a few places.”

Katharine Smith, Environment Agency Flood Duty Manager, said: “Strong winds could bring coastal flooding to parts of the west, southwest and south coast of England, as well as the tidal River Severn, in the early hours of Friday morning. This is due to Storm Eunice resulting in high waves and potential storm surge coinciding with the start of a period of spring tides.