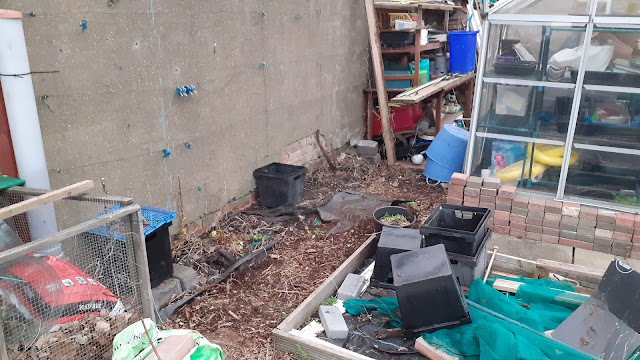 Kelly had too many additional hours and managed to come home a little early from work. Bless her she rang me to let me know so I could get ready to pop down to the allotment for a couple of hours from 3:15pm - 5:15pm.
More clearance and bagging up of the grapevine area beside the plot 1A greenhouse took place, All the vine cutting, raspberry canes and bindweed filled up one of the incinerators. I need to pick my time to burn as I'm the nearest to the block of flats, and don't want to upset our new neighbours despite being here first.
Picking up all the slate fragments is taking a long time, and then I will have to wash the soil out of them, I'm not sure its worth it and considering woodchip as an alternative if we can get some. 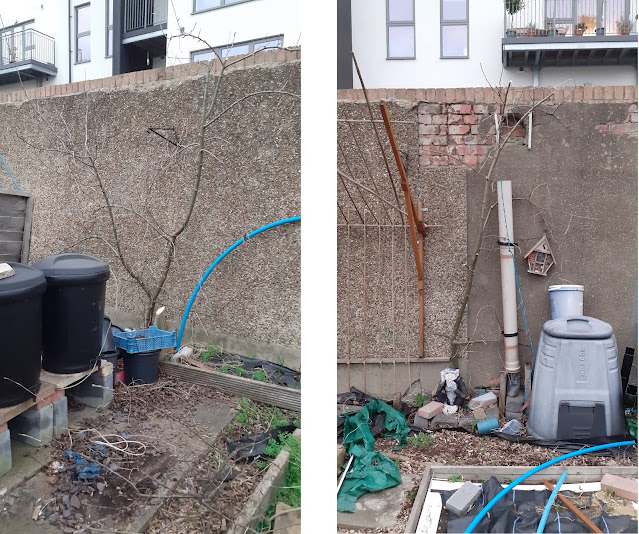 I did have three apple trees along the wall on plot 1A but found the one on the left of the bean climbing frame pulled down to the ground. The other two apple trees had grown a couple of feet above the top of the wall, so I've trimmed them down and I have also removed branches that were growing out into the pathways and branches that were crossing.
I suspect the one that was pulled down was used to gain entry to the allotment over the wall, so if they cant see where the trees are hopefully the others will not suffer the same fate.
I got a great yield of apples last year, the loss of a tree and a harsh pruning of the other two on the wall will no doubt have an effect on the yield this year.
Posted by cadalot at 20:00