KC5383 Grapevine Plant - Flame Red (Seedless) which is supplied as a grafted plant in a 2 litre pot and Cost £18.99 arrived this week on the 4th February 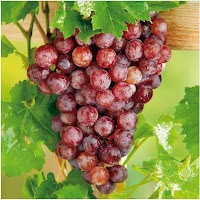 Flame is one of the most popular self-fertile varieties of grape that taste even better just picked from the vine.
This variety is suitable for outdoor and greenhouse/ conservatory growing and the web site says ”Choose a sunny spot and our variety will provide you with a bountiful crop of delicious grapes! The vine is very attractive too!”

When growing grape vines choose a sunny position in any well drained soil. A south facing position against a wall is ideal, and I'm blessed in having such a wall.

The problem is that lots of things were stacked up against it and what remained of the seeded grapes that have been there for some years. I visited the allotment plot on Friday the 5th July late in the afternoon and cleared the area of wall beside the greenhouse on plot 1A exposing the eyebolts and wires. 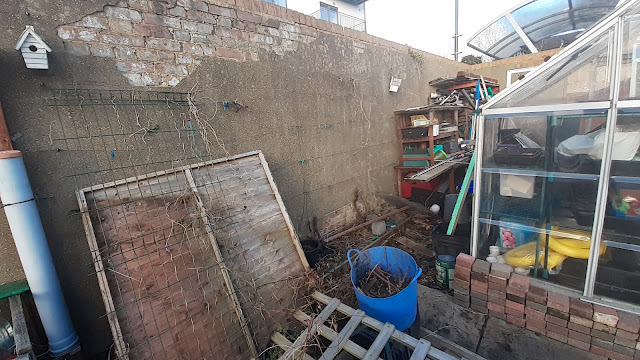 The base of the two vines that were there can be seen and I'm going to have to dig out the roots but having experienced how fast grape vines actually grow only one will be put back in the middle of the wired framework on the wall, between the two bird boxes.
The spare shed panel will be going down to the "bin storage" area that I need to create next to the greenhouse on plot 1 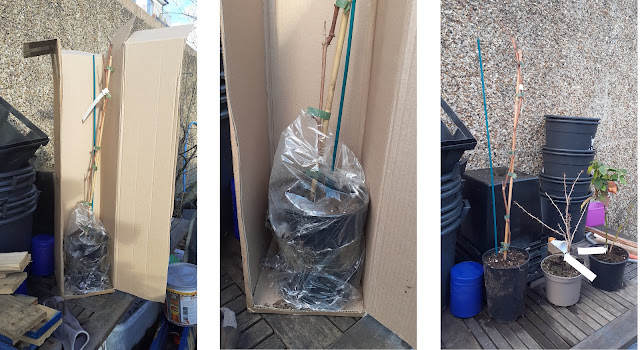 The Suttons Flame grapevine came in a cardboard box approximately 900mm high which I opened to have a look into when it arrived but didn't undo until I was down on the plot. I took the plastic bag off and placed it on the table behind the greenhouse on plot 1 and gave it a drink.
Sunday morning I was up, dressed bright and early came down for breakfast looked out the window and it was tipping it down. So I stopped Emma from coming over to help Kelly to keep an eye on Jen and got on with cutting up more cardboard for Browns down the allotment.
Sunday afternoon, the rain had stopped and the sun briefly came out so I went to the allotment for a couple of hours and Emma met me there to lend a hand.
I replaced the two broken half slabs with a smaller slab at the end of the path and infilled the gap with woodchips. The two half slabs went beside the greenhouse and made a more stable foundation for the Lidl Raised planter with cover.
Emma put in the red onion sets that arrived this week into the bed on the right, and I got the middle bed ready removing the Winter blanket, raking the topsoil and then finding the a 105 hole planting membrane.
Note to self "You need to make another couple of 105 planting membranes as they are so useful for many different crops."
The floor of the shed needed a little sorting out as we had a few little showers and only one of us could get into the shed at a time. The cardboard I have been saving for the Square Foot Gardening beds has gone into the greenhouse for the moment to keep it dry until it's needed.
Emma worked on clearing in front of the potting bench and the greenhouse up on plot 1A, and managed to fill six black sacks of dross and rubbish, that I have taken home and had to put in both the paper and the landfill bins just to keep them dry.
Emma asked "Do you really need all that wood Dad?"
My reply "Yes love, I have plans for it and all Allotmenteers need a scrap wood pile"
I really need to take the Worx Hydroshot pressure washer down there, and clean off those mucky green paving slabs. I have two water butts full of rainwater to use
We got hit by a rain shower and ran the first four sacks to the car, and I we slung the other two sacks in the shed, and as we came back the shower stopped, so we carried on until the heavens opened and the rain descended with a vengeance.
Nice to see the patio & storage area, and around the greenhouse getting a good tidy up. The teak planks on the top of the potting table joints have failed and the plan is to have the bench off and overboard the table with scaffold boards, then fix the bench back on.
So the grape vine has been watered but not quite made it into the ground as I need to get some more wire and replace the vertical climber on the wall first.
Nice to see the comfrey bed bursting to life with bluebells and daffs, which come each year before the comfrey starts pushing through. I may need to weed the bed a little in a future visit, saying that the comfrey will ultimately crowd out everything.
Posted by cadalot at 19:26

Email ThisBlogThis!Share to TwitterShare to FacebookShare to Pinterest
Labels: Grapes