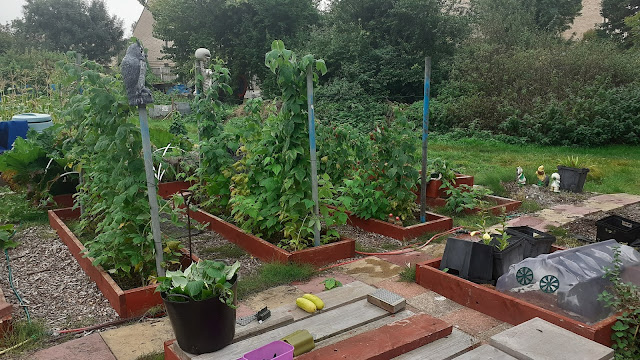 Not in my seed box, but on my allotment
In 2021 I ordered the D.T.Brown - Long Cropping Raspberry Collection that consists of 6 canes each of the following three varieties from left to right Malling Juno (early) far left, Tulameen Pearl (mid) 2nd from left, Polka (late) 4th from left came in March of 2021
Autumn Treasure (late) 3rd from the left was sent in error instead of Polka, and once I notified D.T.Brown they sent out the Polka so I ended up with four beds of Raspberries.

Malling Juno (early) - Tasting the first raspberries of the season is always a treat and Malling Juno is one of the best on the market. The medium to large berries has a firm texture and a deliciously sweet flavour - just perfect for eating fresh.

The spine-free canes are leafy, easy to handle and prune and, the fruits are well presented, so picking is easy too! Cropping from early to late June (even earlier if grown under cover), plants are known to have excellent disease resistance as well. Bred by East Malling Research.

Very few Raspberries in the first year (2021), but such growth once they got going, a super yield in the spring of their second year (2022). The paths either side of the bed required clearing of new canes that come up despite the timber edging to the paths. This was not a problem as they were offered to new plot holders on the site.

Tulameen Pearl (mid) - Tulameen Pearl is far superior to the popular Tulameen which D.T Brown have sold in the past. D.T.Brown thinks this vigorous new strain is a real find and that customers will agree it’s a winner, which I have to agree with. It has a high yield with berries which are larger and brighter, and the fruit is firmer so keeps better once picked, not that they ever last long with my family.

Not a great yield in the first year (2021) which is to be expected, but a good number of additional canes in the first year and a significant increase in yield in its second year (2022). I'm looking forward to seeing what 2023 will bring as the quantity of canes increase.

Polka (late) - A multi-award winner at the National Fruit Show, Polka has exceptional fruit quality, and the large/ medium red berries are full of fragrant zesty flavour. Bred in Poland with Autumn Bliss as one of its parents, the virtually spine-free raspberry canes will yield double the crop of Autumn Bliss and Polka crops up to 2 weeks earlier, from late July to October. Polka even grows well on less desirable soils. 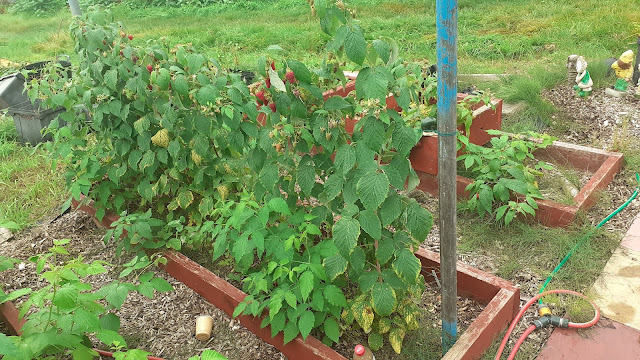 Autumn Treasure (late) - Bred at the world-renowned East Malling Research centre, is set to be the benchmark for home gardeners. This quality primocane has a high disease resistance to root rot, wilt and powdery mildew, and crops well even on poorer ground. It gives an exceptional yield of very attractive, large, firm berries from August to October and the fruit stands wet weather very well. The flavour is very good indeed - not as acid as Autumn Bliss. Spine free canes. 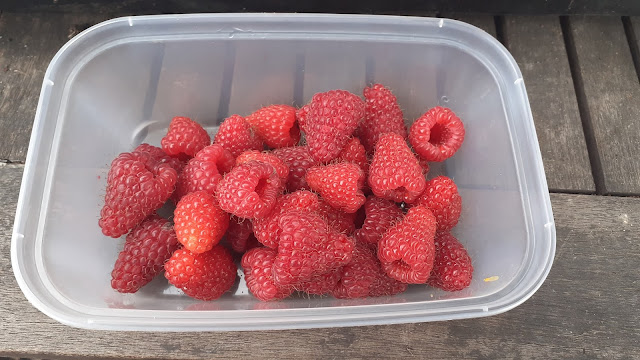 I'm very impressed with the quantity of Raspberries that this variety gave in its first year (2021) and the number of additional canes they have grown and produced fruit in 2022 was staggering.

There were also those particular raspberries that were not in a condition to be taken home and that had to be consumed as I was harvesting.

It was indeed a very lucky accident that Autumn Treasure were sent in error, and I would highly recommend this variety of Raspberry.

Email ThisBlogThis!Share to TwitterShare to FacebookShare to Pinterest
Labels: D.T.Brown, In My Seed Box, Raspberries