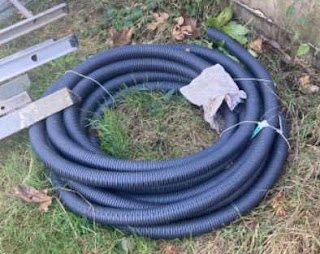 The latest Freecycle acquisition was collected this afternoon in the form and some French land drainage tubing that was excess to their requirements, so they wanted to find someone who had a use for it rather than just taking it to the dump.
I was thinking of perhaps using it to grow nice long carrots. in next year. it is however not as large a diameter as I thought, so I may also use it to water a couple of beds at depth, i.e., a reversal of what it's supposed to do. The chap getting rid of it also gave me the roll of sock filter membrane that he didn't use.
My trip to the allotment was basically as a drop off visit, but I did take the opportunity to look at the sweetcorn after hearing that the rats with furry tails had eaten all of Racheal's sweetcorn

And he or her, they or however else they identify these days, had nobbled another two sweetcorn so I covered as many cobs as possible with pop bottles that I had taken down with me and that were already on the plot. I have seen people put socks over to try and hide the smell, but I have not seen anyone try pop bottles before, I'm just hoping it will put the little pests off.

Hopefully that will give the corns the extra couple of weeks they need to ripen. 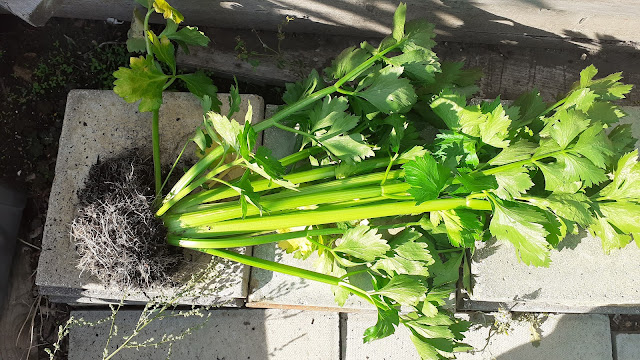 I harvested my tallest of my Celery Tango plants that I got as postiplugs from Suttons back in May this year. I trimmed the root off before bringing it home and have stood it in a jar of water in the kitchen to keep it fresh. I'm really looking forward to trying it, and hopefully I will get to harvest and consume the rest of the 17 plants before the first frost hits. It's the first time I have used Suttons postiplugs and the results are looking good. With them coming as 18 plants I have wondered if perhaps I should have put some in the greenhouse to bring them on a little earlier so as to spread out the harvest period? 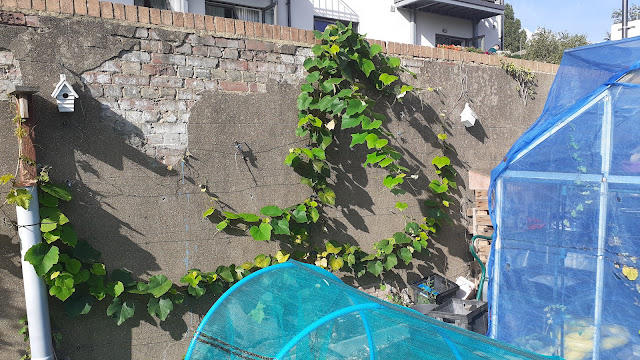 Over the last week of rain, the grapevine that I purchased from Suttons this year has really grown, and I need to trim it back and train out some of the offshoots along wires on the wall, a job for Tuesdays early evening visit me thinks. 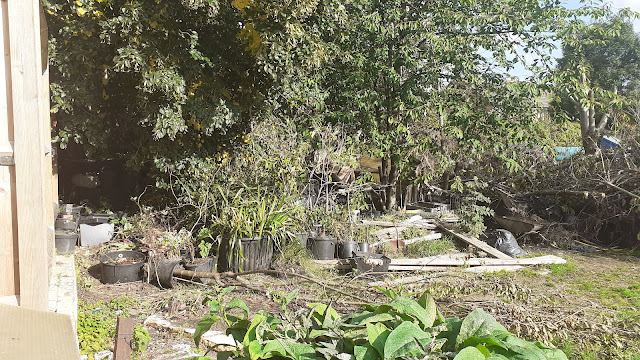 The previous owner of plot 3 who should have removed all the items he wanted back in May is still turning up despite being given an extension until the end of August. He is extracting items from the two overgrown forested and cluttered half plots that he once rented.
He is depositing so much on a neighbours plot, and I'm guessing that neighbour has given his permission because he is such a nice guy.
I'm just hoping that his good will does not explode in his face, as I can see him getting a 28-day improvement notice from idverde as the dross and rubbish is now being stacked on his plot.
Posted by cadalot at 15:15