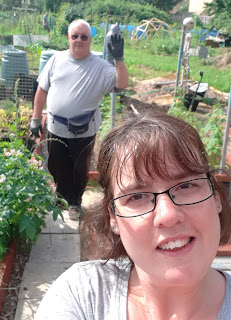 On the plot reasonably early this nice sunny morning. I applied sun cream lotion to my face neck and arms and got on with the task of digging and weeding the area of paths and for the next Rhubarb bed.
I then heard a voice calling my name and went to the gate to see who it was. It turned out to be my daughter Emma, and I was told I will come to the gate if my daughters call Alan but if I hear Dad I will just think it's someone on the other side of the wall calling for their Dad, I think they are right! 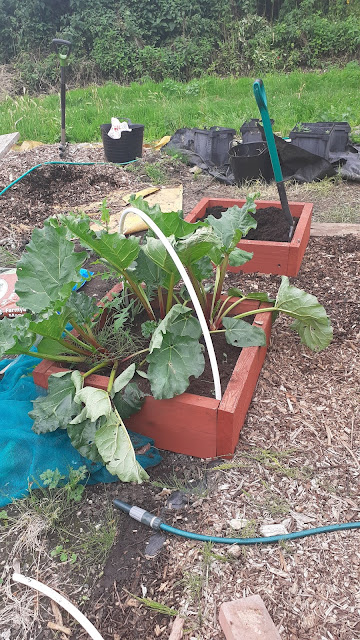 Rhubarb bed 1 with the three Rhubarb Livingstone from D.T.Brown is now looking a little over crowded as they have grown so well. I took the mesh off last week and the bloody fox had started digging in the bed looking for worms.
In the photo above I had dug and weeded and laid the weed membrane and laid the woodchip path and had filled the bed framework of Bed 2 with one sack of farmyard manure that I had picked up from the local garden centre last week when moving Pauline's tools to her new allotment plot. 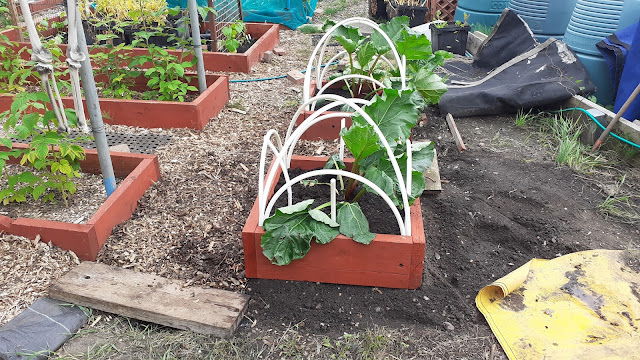 I dug up one of the Rhubarbs and transplanted it into Bed 2 and dug out around the outside of the central rhubarb in Bed one and added farmyard manure around 2/3 of the outside edge.  The white pipes are to try and stop the foxes from digging in the Rhubarb beds. 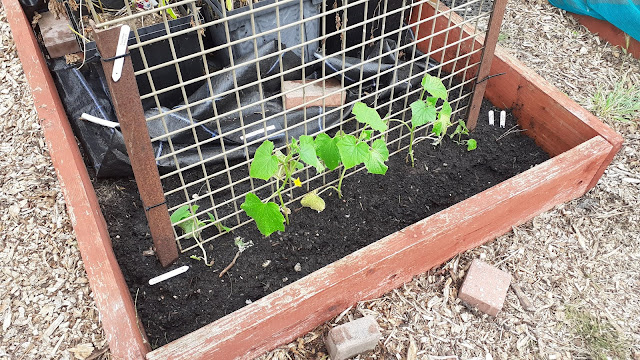 One of the Swift F1 Cucumbers is looking a little weedy and I may loose that one, but hopefully the other four plants will flourish. 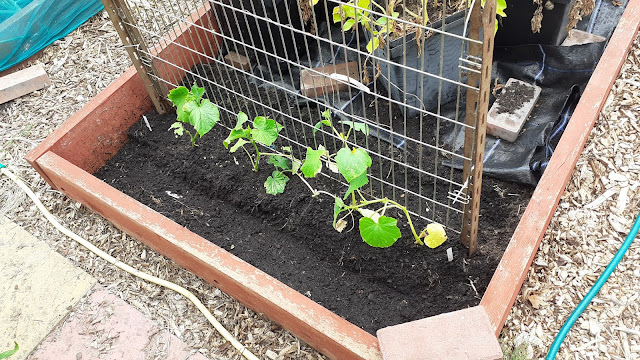 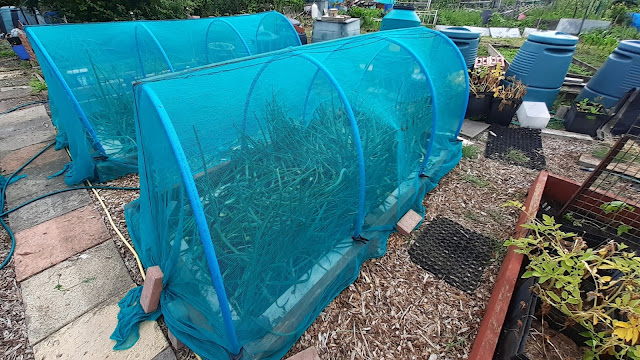 Emma finished weeding the two onion beds for me. 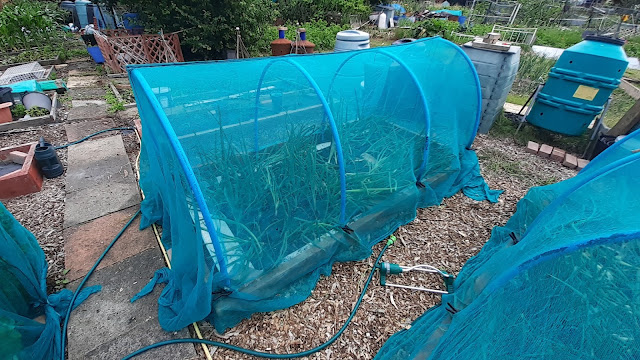 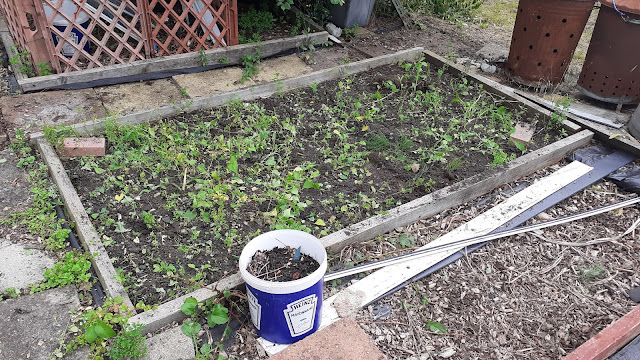 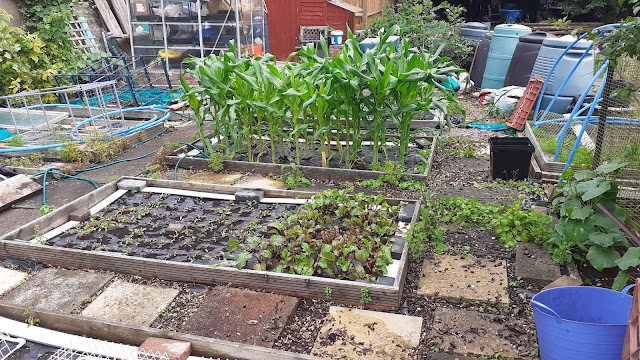 Sweetcorn and Beetroots had a good watering today 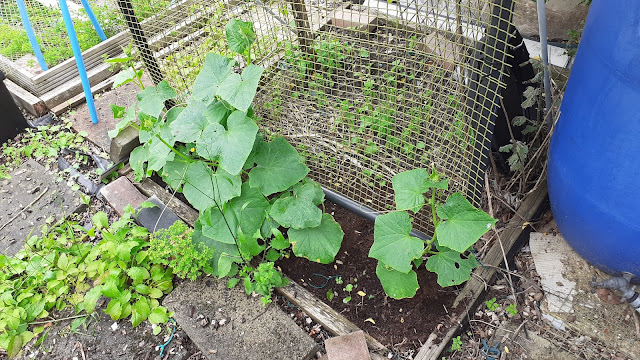 Gherkins National making their way up the mesh framework 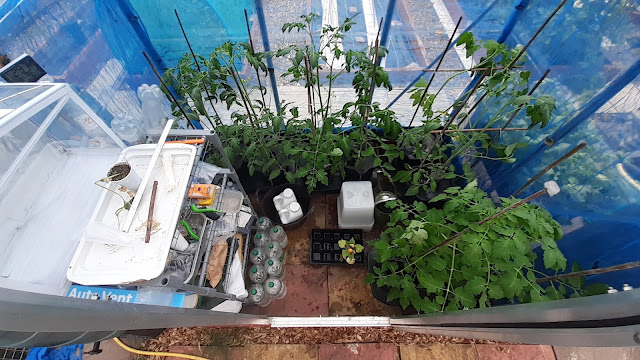 Bamboo canes added to the tomatoes in the Quadgrows in the plot 1 Greenhouse. These tomatoes are 3 times the height of the ones planted out in the beds. I filled up a number of water bottles as I need to prime the water with the feed mixture.

The roots can be seen in the water reservoirs when the cap is removed. 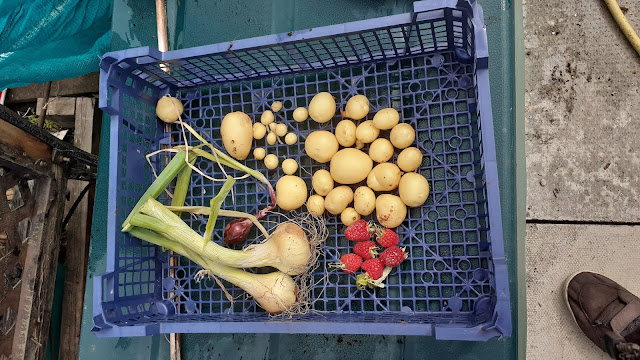 Emma took home some first early spuds that were in a bucket that a fox had started to excavate, a few onions that came out with some of the bigger serious weeds in the beds and some raspberries from plot 1A, as I don't rally have much to harvest just yet and I haven't managed to get half of the crops in and the infrastructure completed as I had hoped this year.
Posted by cadalot at 18:48