It's in excess of 28 days of the non-cult letters and Jane Hardy the idverde allotment officer is meeting me this morning to re-inspect the site. There are a number of plot holders on the plot today as they have issues they wish to bring to Janes attention.
Two of the three plot holders who have been issued with non cults have at least cut back all the weeds and are in the process of digging and cultivating the land. One has even sown something in one corner of their plot!.  It's only taken her two years, but finally.
The third on the other hand did nothing because he was waiting for the non-cult letter, then stated that it never arrived and after it was received, still decided to do nothing. I did ask all three of them if they don't have the time to spend on the plots to please give them up as there are 36 people on the waiting list.
There are a number of issues which I can't really blog about, until hopefully they are resolved in some way. 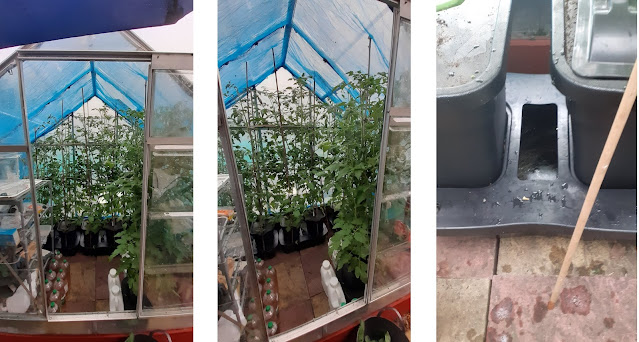 As I had not been down this weekend the levels in the Smart Reservoirs of the Quadgrows were on the low side and I used all the made up bottles that were in the greenhouse and when I left the bottles were on the potting bench but I didn't have chance to add the Nutrients A + B to the bottles.
It's OK being a site rep but I hate it when it steals precious allotment time, dealing with complaints and site inspections. These days I refuse to undertake the inspections as you set yourself up as a target. I accompany Jane and tell her the plot number and give her some background i.e. letting her know that a plot holder is currently in hospital and that's why their plot is a little overgrown etc. and they will be back on it as soon as they recover.
We have been known the help keep plot clear and water for plot holders who are sick, but we have learnt over time that even God only helps those that help themselves.
Posted by cadalot at 14:31