Last night there was some thunder & lightning and Rain, wet stuff from the sky!
So why the need to get down to Avalon (my two plots) at 7am this morning? 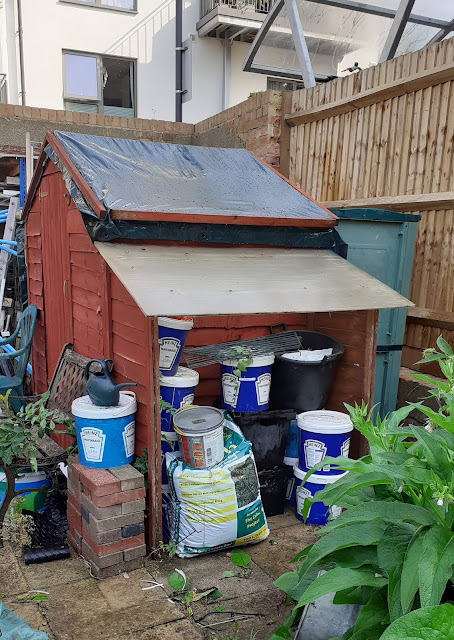 To finish screwing timber roofing battens to hold down a tarp roof covering on the original Plot 1A shed that was bought in 2012 when I got the plot.  With the tree being dropped on it and it needing re roofing for a couple of years, one of which I was shielding my wife.
I had bodged it to try and keep it water tight since I noticed it needed attention when the tree was growing over it. Rather than use felt I decided to use a new good quality tarp that I had been given by a friend who sold them and other gardening items. It's an allotment shed, its a make do and mend mentality. 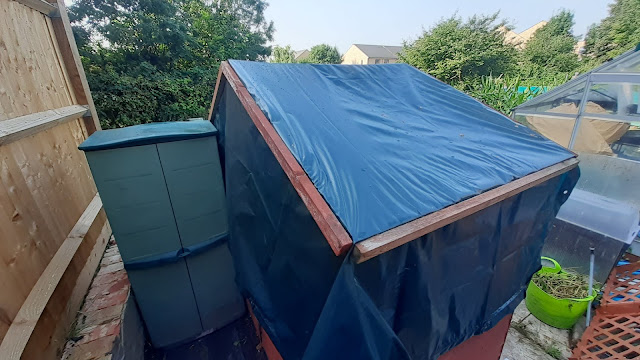 You can make out the profile of the sag that has happened as the roofing sheeting got damp and sagged but I'm hoping to ease that back up using a few roofing battens internally under the board. 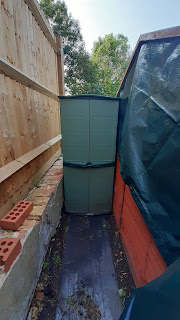 I have not made my mind up about trimming the tarp at the moment, I may just staple it to the shed, especially along the back.
The plastic tall-boy store was inside one of Pauline's sheds and she didn't want to take it to her new allotment and I thought it would fit in behind the shed where I had the original racking and covered storage area before they took the tree away and left most of it sitting on my shed in early 2020.
It's made to measure and fills the gap so well. The path behind the shed needs wood chipping but at the moment we don't have any. I may see if I can rustle up some paving slabs as I won four off Pauline's old plot.
This end of the allotment and the storage area has been left whilst I have been concentrating on trying to get Plot 1 infrastructure completed. I really could not ignore re roofing the shed anymore especially with the heavy rain forecast for this weekend.
The potting table up this end needs taking apart and a new scaffolding board surface screwed to the frame as the teak timbers have rotted but the basic frame is still sound.
I also need to finally clear the Plot 1 greenhouse of the items stored in there and net it up and get it ready for some over wintering growing.

I used all 10 bottle that's 20 litres of water filling up the four Smart Reservoirs in the Qhadgrows which means the tomatoes and evaporation has used 5 litres of water of their 15 litre capacity in three days so the 7 - 10 days claim looks about right for temperatures in the high 20's to low 30's Centigrade.
When filling the reservoirs I noticed that there are small Gigantimo Tomatoes forming, and out on the plot there are Crimson Cherry and Crimson Plum forming. I'm so hoping to get some red tomatoes before blight takes them.
I charged up the 10 bottles and found another couple and charged those as I don't plan to visit the allotment again until next Monday.
There are Raspberries going red on the my Malling Juno (early) which are supposed to crop early to late June. This being their first year it's a wonder they are producing anything at all.
I left the allotment at 9:45 as I had to collect a external computer storage device on my way home.
Posted by cadalot at 16:22