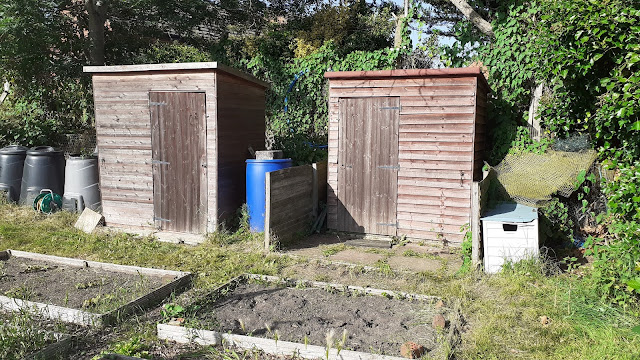 A couple of weeks ago my sister-in-law Pauline came up from her new home in Horley by train to visit us for a spot of lunch and so that I can help her move some of her tools from her three sheds on plots 6 & 7 down to her new plot on the allotment that is behind her house. She has a T&P shed and and gardening shed, then there was the two old asbestos sheds on her second half plot that she inherited.

Today her son-in-law and my son-in-law are moving the remainder of the items she wants to ship down to her new home and plot. It's a little bitter sweet as I helped her and Keith measure up and set out the plot when they took it over, and it was Keith that talked me into getting my plot on the same site. The idea was that we could meet up and have socials on the plot or Keith and I could graft and the girls could natter. That really never came to pass as the wife got ill and her mobility got bad so quickly that having a fall put her off coming over and helping me. 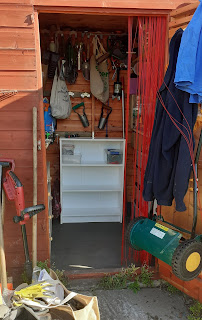 Keith passed away a couple of years ago now, and Pauline has now moved nearer to her daughter who is due to make her a Nan soon. I miss Keith a great deal he was more like a Brother than a brother-In-law, and now there will be no coffee making and sharing with Pauline.

I arrived early to clear the plot 1 shed in order to fix a bookcase that was going to the tip to the back wall of the shed.

Soon Andy and then Pauline & James turned up and we set to work filling first Andy's van and then finally just a few items in the back of my car.

We then made our way to Horsham to and I was driving down the M23 and about a mile away from the Peas Pottage when there was suddenly a noise like a rumble strip and I decided that pulling over would be a good idea.

On jumping out of the car I was shocked to find that the tyre had exploded!  Pauline and I evacuated the car and I tried to ring the RAC. I have to say they now want everything logged on the internet. Now just because I have a smart phone does not mean I use it to surf the web.

Andy pulled in as he had a warning triangle and more importantly two seats that he was taking to Pauline's new plot so jumped over the barrier, Pauline and I got the seats and we tucked into the packed lunches that Emma my daughter had made us.

Now what does really worry me is if I had broken down on the new four lane section of the motorway would I have been expected to drive my car on the inside lane to the emergency laybys that are at about mile centres?

The removal of the hard shoulder is such a bad thing and really has not been thought through !

Finally after about and hour and a half the RAC arrived put on a transport wheel and then we went to the service station and they found a somewhere that could fit me a new tyre. I followed the RAC Van to their venue and I was in and out again in around 10 minutes!

Pauline and Andy had gone on ahead in he van once the RAC had arrived, and I followed the sat-nav to Pauline's new home.  A cup of coffee later we all went to the allotment to drop off those items that needed to go straight to the plot, Andy and Pauline having already stored a lot of other stuff in her garage. 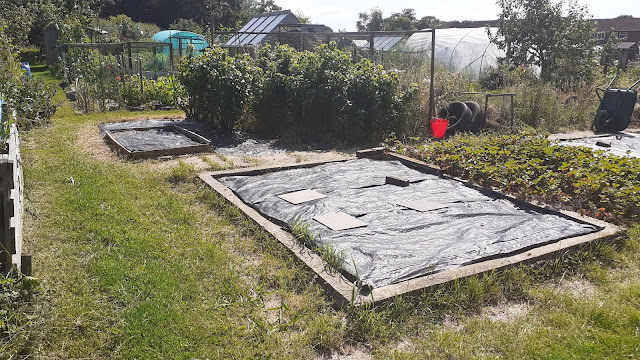 View from the top right corner of the plot 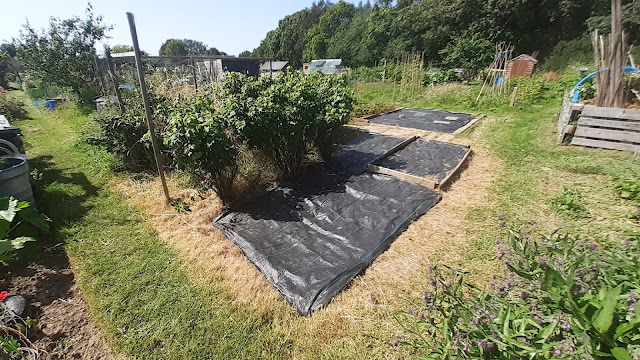 View from the top left corner of the plot with the weeds removed and covered in weed membrane and the weed thinned from the fruit bushes.

Looking at the section of the plot between the fruit cage and the shed that needs clearing to give Pauline a clear run at organising getting her greenhouse in beside the shed and getting in the beds sorted for 2022.

Thankfully the dive home was uneventful!