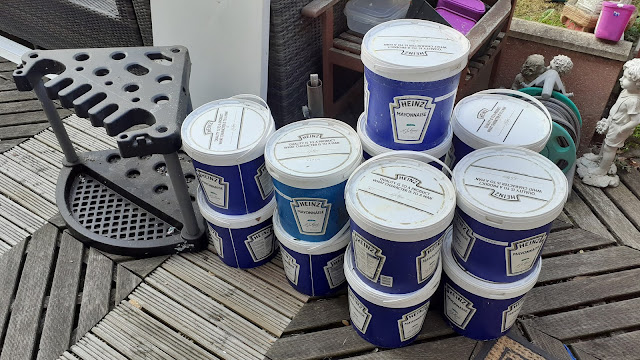 Up early and filling the buckets with lids with the spent compost from the tomatoes grown in square flower buckets this year in the back garden. 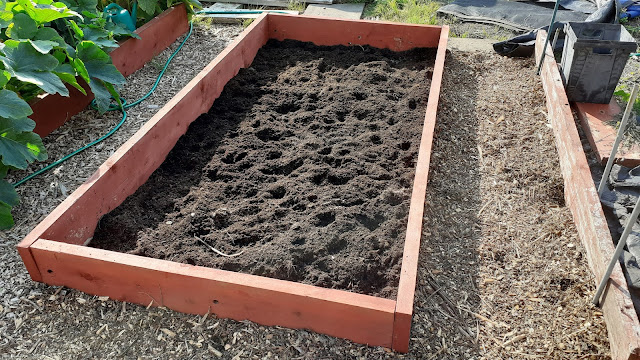 The foxes have been playing in the bed I put the spent compost on yesterday, so from the looks of it I may have to install the Fox Repellers sooner than next season!  Obviously no one has told them that the idea of having beds is to not to walk on them and compress the soil. 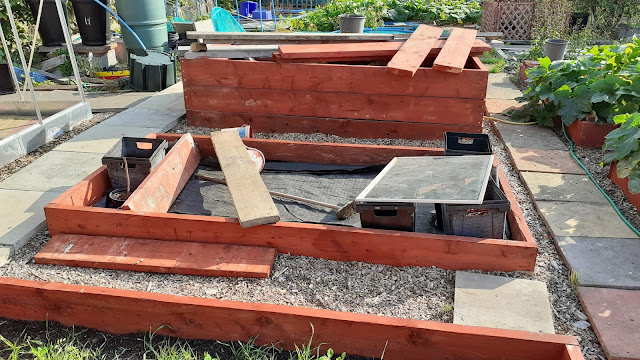 First order of business was to move the flower buckets with drying material for the bonfire next month. This is now standing in the temporary leaf cage with the glass panel over to keep the contents dry.
The timber joist on the stacked beds in the background were laid straighter and in a more ordered fashion so that I could paint the four cut lengths for the base of the greenhouse again. 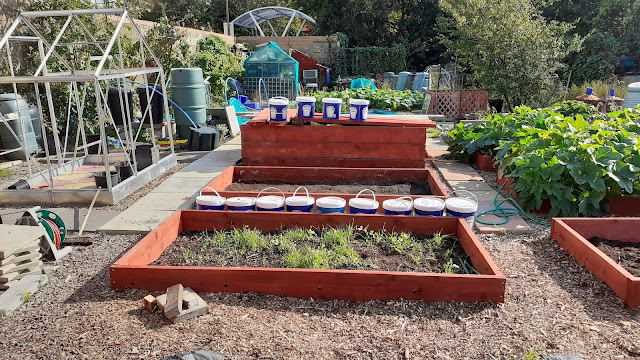 As Monday 14th September, I unloaded and placed the 13 buckets with lids full of spent compost just inside the allotment gates and then used the wheel barrow to get then to the uncovered bed. I stacked them along the path in front of the bed, and on the joist on the stacked bed frames behind. 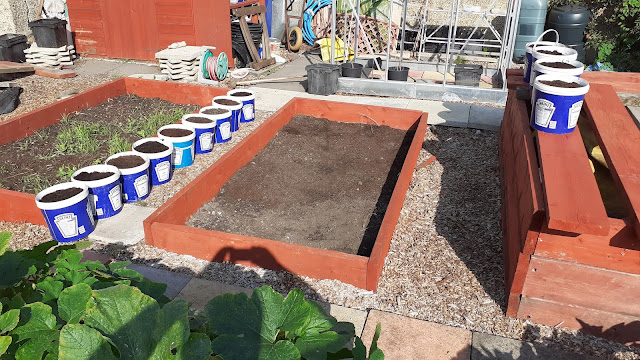 Off with all the lids ready to pour onto the bed. As you can see from the shadow the sun was out and the temperatures were around 22C - 23C which is really nice for September in the UK. 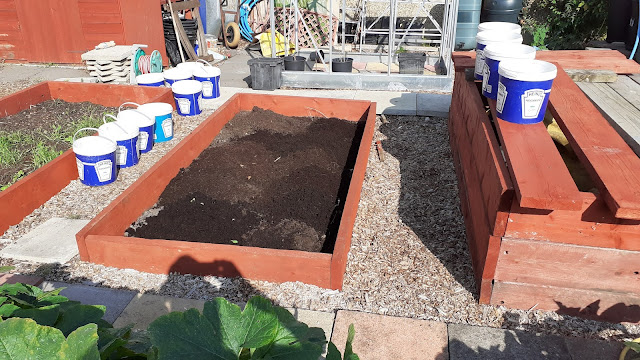 All 13 buckets emptied into the bed and raked level, and then a search, for Green Manure for this bed and the one trampled by the fox. It's amazing how much compost you need even to get 25 - 50mm topping layer in a 2.4m x 1.2m bed. 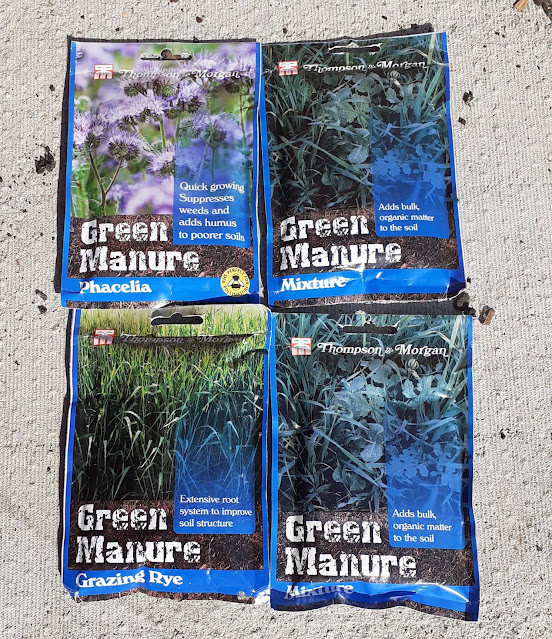 A quick search of the shed and I found the Thompson and Morgan Green manures that I got from the last Wyevale 50p Seed Sale. Grazing Rye, Mixture, Phacelia. It appears T&M no longer do the Mixture. 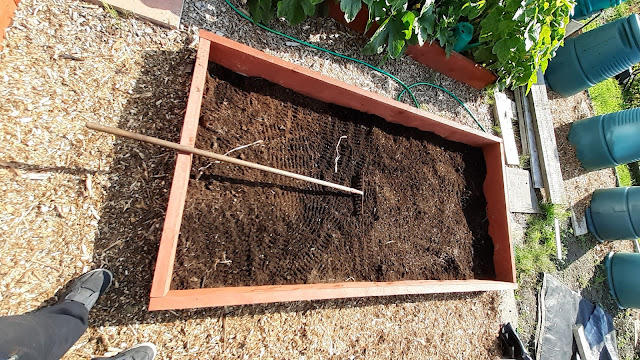 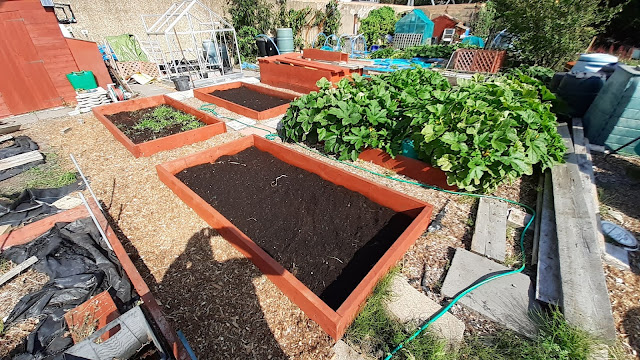 I used half of a pack topping up the bed in front of the greenhouse and the other half on the foxes bed. It appears Basil has been sleeping in the middle of one of the Winter Squash and once again this weekend I have them a good watering as it's been hot and dry all week and the forecast for the next week is more sunny war and dry weather. 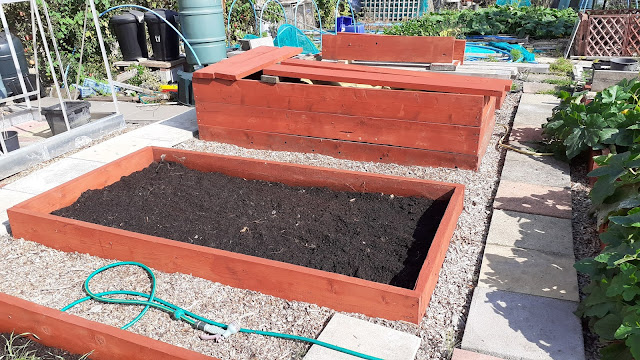 The timbers for the base of the greenhouse stacked on top of the tower of bed frames, had a number of coats of paint during the morning, as I was painting and letting the face dry before moving on to the next face of the timber. Because we have had very little rain and its been warm and dry the joists were very thirsty and the paint dried quickly. 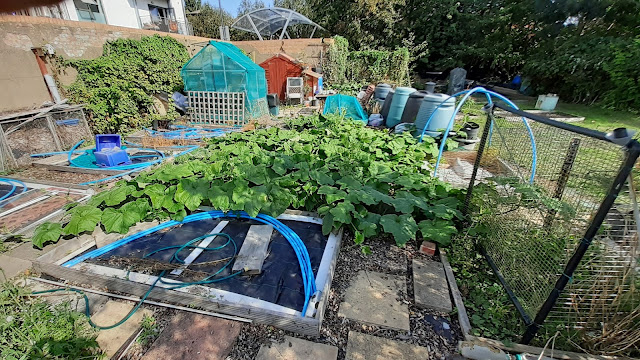 Most of what I was doing was on plot 1, meanwhile on plot 1A the butternut squash has decided to take over the main central path and is spreading for all it's worth. So far I've not looked to see if and how many squash are there. 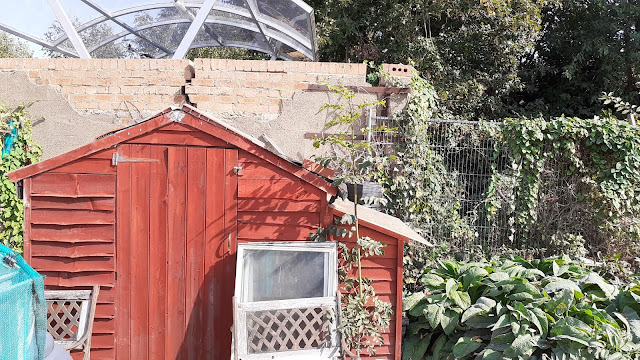 I've been purposely keeping away from the shed on Plot 1A as the wall is still dangerous, and yes the Council have still done bugger all about it. I have been chasing on a weekley basis and next I will go to the local councillor and press about it. 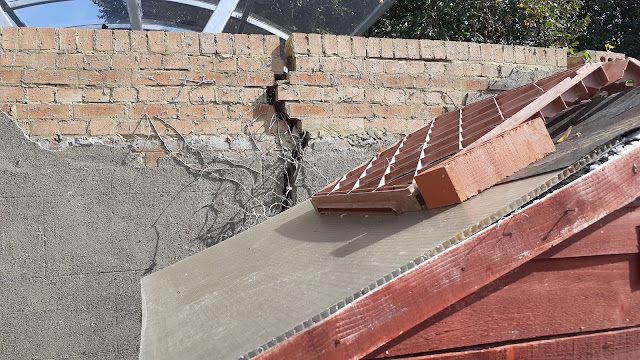 The amount of movement (opening up of the gap) and rotation of the panel towards my shed that has taken place since the contractor removed the trees that were holding it all back is clear to see. I've been desperate to re felt the shed and the timber to the roof has suffered as a result. The Heath Robinson repair can only do so much.

I used some tubes from racking to mark out 600mm paths and 700mm bays including the 50mm wide timber to the frames. The wide shot has some curvature to it but I'm looking at putting in 4 fruit bays and 3 square foot gardening bays 1.2m x 1.2m square

I managed to trim the bottom of plot 1 on the main path and once again expose the kerb stone that are lain on flat. as I got to the corner one of the blades broke. I have some, somewhere but it recalling where that somewhere is. I think they are in the shed on Plot 1A but with the wall I don't want to venture into the shed just at the moment.
The grass needs cutting but I'm not sure if idverde will be coming to do it again this year. I may have to take my Ryobi Battery Powered Lawnmower down and trim the main path in front of my plot and the path between my plots and plot 2.
Posted by cadalot at 22:00