Clearing Around The Shed 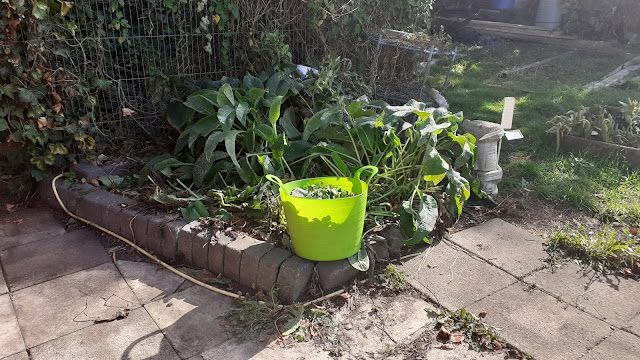 My daughter's and sister-in-law are having a girly lunch session today with my Wife before we have to start shielding her again which we have decided starts from Monday. it was suggested that I take the opportunity to go to the allotment and get on clearing the area for the contractor to work on the wall, and perhaps take some lunch with me so I don't have to come home and can get on.
You don't have to tell me twice, in fact Kelly made me a large packed lunch as I would be working and may want to have a couple of energy breaks during the day
I hit the comfrey bed and the photo above is at about 60% harvested. many grateful Dalek were fed today in fact all the active Daleks had a very good layer in.
The bindweed had tied the old blow-away frame to the heras fencing creating the drop zone in front of the wall along plot 2 that was due to collapse in 2013 when I took over the plot and reported it the Council. I do hope they bought and have not hired those fencing panels, that's not so silly an idea. I know Sutton Council housing department did that in the past, they paid for the fencing about 20 times over on hire charges and no one ever saw the bigger picture and just purchased them. 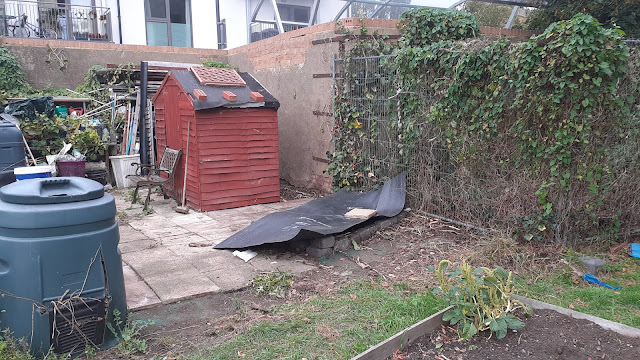 I've covered the now stripped comfrey bed with some Correx Floor Protection but will trim it fit on my next visit so that no debris pollutes the bed when they undertake the works. 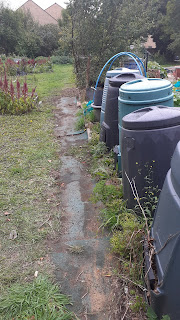 The path between Plots 1A and Plot 2 was swept up. The weeds around the base of Dalek Army 1 need weeding and topping up with woodchip again, but that's a job for another time.
The plum tree has been trimmed back so it's not overhanging the path, and the contractors have un obstructed access. 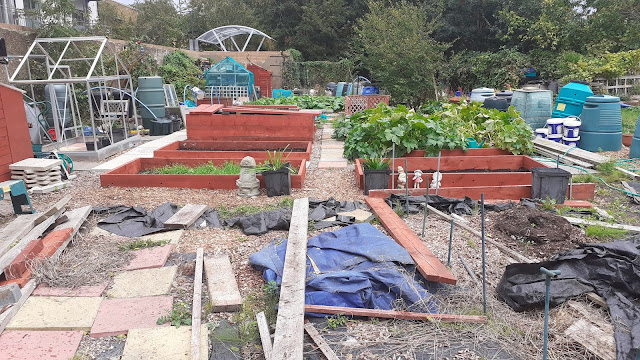 The windmill was moved but I bent the propeller in transit so I need to straighten that or replace it. Cheeky the Gnome, Bill & Little weed are now down with the two Agapanthus on Plot 1 that I repotted, but unfortunately Ben didn't make the trip in the wheelbarrow from Plot 1A.
RIP Ben gone but not forgotten!
Posted by cadalot at 18:00