Friday is Bank Holiday Monday due to VE Day 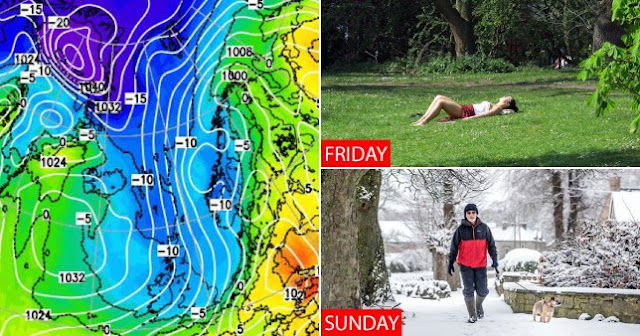 Britain will go ‘from summer to winter’ in 48 hours, with Friday seeing highs of 25C followed by freezing temperatures and snow falling in May for the first time in 23 years. A ‘Spanish plume’ will grace the skies on May 8th, which marks the 75th anniversary of the end of World War II in Europe. Though VE day celebrations have been cancelled as a result of coronavirus lockdown, Brits can at least enjoy the Bank Holiday from their gardens, with weather maps showing an 800 mile-wide waft of hot air heading over from Spain. However, that won’t last long, with a 1,000 mile-wide mass of Arctic air heading over on Sunday, causing temperatures to plummet virtually overnight.

The Met Office forecast highs climbing from 19C today to 25C on Friday, but falling to 14C on Saturday in the north of England and 10-12C on Sunday across the majority of the country. -5 nights are expected in Scotland, while frost, wintry showers, snow and lows of 0C are a possibility even in the south of England. By the early hours of Monday, nowhere in Britain will feel higher than 2C as the country is dragged into an unseasonal cold snap, Met Office weather maps show 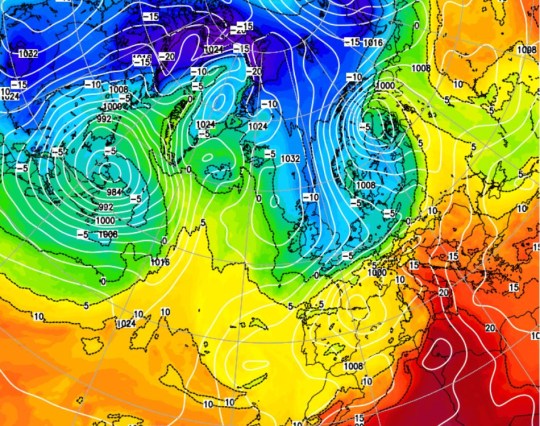 Weather Outlook forecaster Brain Gaze says the last time May saw such a big snow event was in 1997. ‘A plume of very warm air from Spain means the VE Day holiday could see 25C. But thunderstorms are a risk and an exceptionally cold plunge of polar airfollows on Sunday’ he said. ‘Forecast models show snow showers in the North and even snow risks inparts of the South.The last time I can recall snow falling like this in May was 1997.’

The Met Office has also warned Brits to prepare for the strange weather phenomenon. Forecaster Marco Petagna said: ‘It’s from summer back to winter in 48 hours. Massive temperature changes are forecast. ‘It warms up from Wednesday with the mid-20s on Friday in the South, then cold Arctic air sweeps south across the UK during the weekend, and could see snow on Scottish mountains.’