I went to the allotment this morning with the intention of getting the path in beside the Raspberries and clearing the triangle of land in the corner of the plot.
Although it does not show up very well in the photo, I have placed broken paving slabs in front of the Dalek army and have laid out timber joist and cut roofing batten to support the middle and ends of other timbers such that when stacked there is air flow between the timbers and the ground. I still have beds and cold frames to get out of this timber.
This cleared all the timber from in front of the Daleks internally and uses the margin on the path as a storage area. The two greenhouse frames I have in boxes between two beds on plot 1A will be moved to the area where I took the photo from below until I can get them erected and finally placed in the corner of the plot where the wood chip pile currently is. 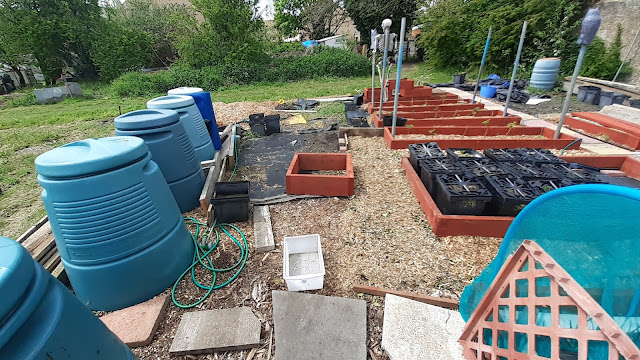 The next job was to move the spuds in buckets out from behind the Dalek army and into the two beds that were green manured, and have now been covered in weed membrane to assist in killing off the green manure and making a nice environment for the soil critters to work on it and take it into the soil. The "haulms" or the tops, stems, and foliage of the first early potatoes in buckets have started too show through the grass mulch. 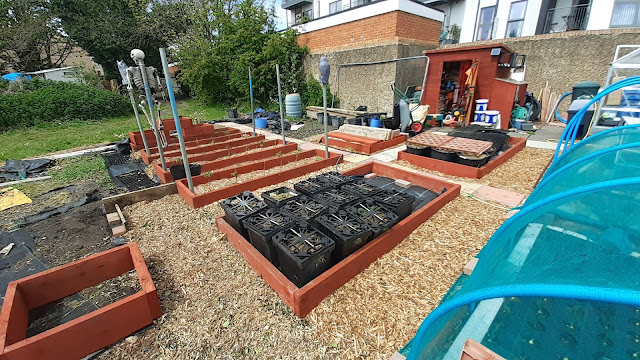 The area dug and weeded this morning looks very small, but when one sees the amount of mares-tail root, bind weed and couch grass roots that have come out of that area, it was a lot of work.
If you have ever had to deal with a plot that was left to go wild with this stuff you will understand my pain and how long it takes to weed the soil as you turn it over.
In my mind I was aiming for completion of about 50% of the path the reality was more like 30% but I did do a lot clearing the working area today as well.
Soil bulks when dug and I have to say what is coming out of the path area once weeded is beautiful looking material. I raked and re weeded and then shoveled four large square flower buckets of topsoil for use in the raised Rhubarb beds. I will sieve and weed this top soil once again before using it in the Rhubarb beds. I really don't want bindweed, couch grass and mares tail taking over the new Rhubarb like it did with the one I inherited on plot 1. 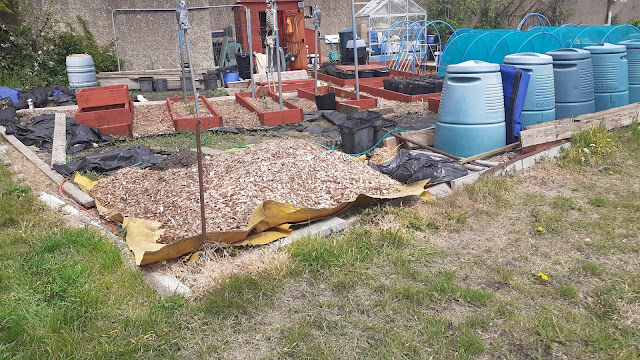 The paths were compacted using a short 800 mm length of scaffold board which was walked and jumped up and down on, the the weed membrane was located in place and covered in saved old woodchip from the other side of the plot. Then a layer from the pile out in the car park which is disappearing fast and is becoming very leafy, and then a layer of dry leaf free woodchip from the pile in the corner of plot 1A as shown in the photo above. 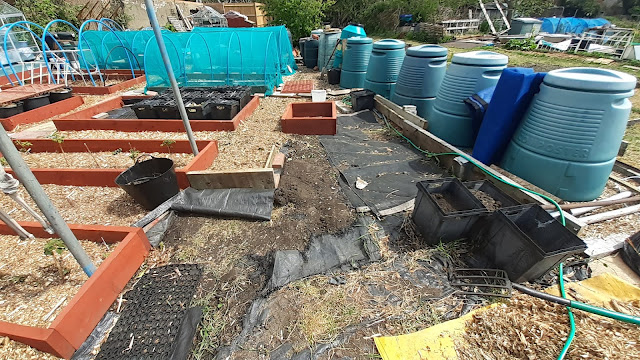 A 600 x 600mm Rhubarb bed was placed at the end of the first 1.2m wide bed to see how it would look if I made another or I could possibly make it 1.2m wide x 0.6m wide.
Placing it there helped me see how much more I will need to dig to get the rhubarb beds in and the paths between them. So it's looking like I need at least another 4 half days worth of digging and weeding to get the rhubarb beds in place, so they will have to stay in the pots for a little while when they arrive.
Posted by cadalot at 18:00