Please contact The Fox Project on 01892 824111 or Metropolitan Police Wildlife Crime Unit if you have any information. 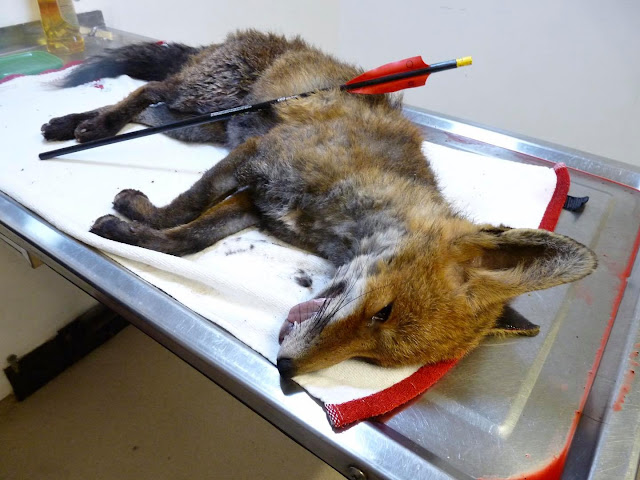 Despite what some folk might suppose, we seldom see deliberate, extreme cruelty to foxes. Most of our casualties arrive suffering with disease, infected wounds, parasitical issues and injuries relating to road accidents.
It is therefore, never less than shocking when we are called to incidents that remind us there is a small minority in society capable of vile behaviour towards animals.
Whilst the following Media Press Release – which has been personally delivered to every householder in the area - is only directly relevant to supporters living in close proximity, we feel it is important for all our Facebook followers to understand how we can deal with such situations.
“In the past few days, three foxes have been shot with a crossbow in the area of Parkgate, London SE3. The first was found dead by a local householder and this photo shows the second - a young dog fox shot through the back at such close range that the arrow was protruding from the stomach.
The incompetence of the culprit meant the animal was not killed immediately, but was moving around in pain and distress, gradually weakening from blood loss for several days before our rescue team was able to get close enough to capture it. By then, it was too late, and we had no choice but to call it a day – although, at least, the pain was over.
This cruel and illegal act is liable to prosecution under various animal welfare laws and use of such a weapon in a built-up area puts it in the category of an ‘offensive weapon’.
There are legal penalties for use of an offensive weapon, not least because anyone irresponsible enough to use such a weapon in an urban or suburban environment could as easily target pets and cause injury or death to people by means of ricochet from a building or wall.
In addition, because these animals were not killed outright, the actions of the person involved comes under the law as ‘causing unnecessary suffering’, an offence subject to further legal penalties including imprisonment.
The Fox Project is working with the Metropolitan Police Wildlife Crime Unit to identify and apprehend the culprit, in addition to which the Project is offering a reward of £2000 for information leading to a conviction.
If you have information, please call the Police Wildlife Crime Unit on 07887 454621 or email Wildlife-SCD6@met.police.uk quoting reference CAD 4617/06Nov. Calls will be treated in strict confidence.
There are reports of a third fox with an arrow embedded in its side. If you have a sighting of this animal. please contact The Fox Project’s ambulance team on 01892 731565 (9.00am – 9.00pm).
For further information, photos etc., please call The Fox Project on 01892 824111 or Metropolitan Police Wildlife Crime Unit as above.”
Posted by cadalot at 08:53