It's been raining nearly every day during October The met office statement made in Friday 16th October stated
Saturday 3rd October 2020 is now the wettest day in the UK in records dating back to 1891.

We received enough rainfall in a single day to fill Loch Ness .

The first half of October (1-13th) has been very wet across the UK. Early provisional statistics show England has already received 87% of its monthly average rainfall, with the south east and central southern England having reaching 110% of average by October 13th

A swift visit today to decant 10 buckets of apples into a Dalek with layers of cardboard in between. The buckets and lids were washed out and placed on the timber bed stack to dry off. Whilst I waited for that to happen, I took the strimmer to the grass and nettles that was long along the path between plot 1 & plot 2 and from the main path to the entrance of plot 1. 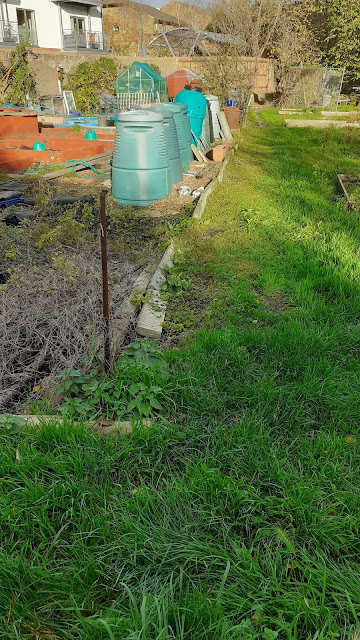 Path between plot 1 and 2 trimmed back 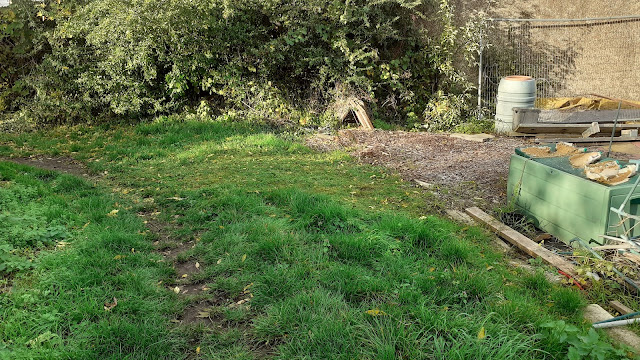 Grass from the main path to the plot entrance trimmed back with the strimmer as this time of year with the rain, frost and dew on the grass, if you wear trainers your feet end up wringing wet before you get the the woodchip paths.
A small amount of hoeing went on around the Daleks, finally the buckets with lids were dry-ish and then it was back home, visit over.
Posted by cadalot at 16:00

Email ThisBlogThis!Share to TwitterShare to FacebookShare to Pinterest
Labels: compost