Today my future son-in-law Andy supplied some welcome muscle and his van and we removed the decking and a large quantity of cardboard, weed membrane cut to path width size and paving slabs from Spencer Road Plot 23B and brought it over to Mill Green Plot 1A. The new incinerator that I bought for Spencer Road also made the trip back as I will need it in addition to the existing rusty one at Mill Green to burn the weeds once I start attacking Plot 1

As you can see in the photo above Plot 1 on the left of the picture above and in the background in the one below still has not received any attention, and I'm just waiting for the paperwork to arrive before I start attacking it.

The plastic strips that have been defining the edge of the beds were eased out of the ground and the timber decking bed edges were re assembled and put in their stead. The weeds along the paths were removed and cardboard already cut into 600mm wide strips were laid along the paths.

This was then covered in weed membrane and the slabs placed along the paths on a semi hit and miss basis to hold the weed membrane down. the tarp in the left is covering cardboard on the path until I can cut some membrane and then the paving slabs stacked by the incinerator in the top right of the photo above will go down on top.

Excess cardboard for the moment is now stacked in the greenhouse ready for more paths to be installed like the one between beds 7 & 8 in far left of the photo above, parallel to the sweet corn to be done, once the decking board edging has been re assembled and installed into beds 7 & 8 and I have cut more path width weed membrane.

The slabs will have the gaps infilled with woodchip when we arrange a drop in the new drop off and pick up area.

The three paths between beds 2-3, 3-4 & 4-5 and the path parallel to the wall where the runner beans are grown have not yet been touched and are still very weathered woodchip that is degrading to nice compost and supporting weed growth. 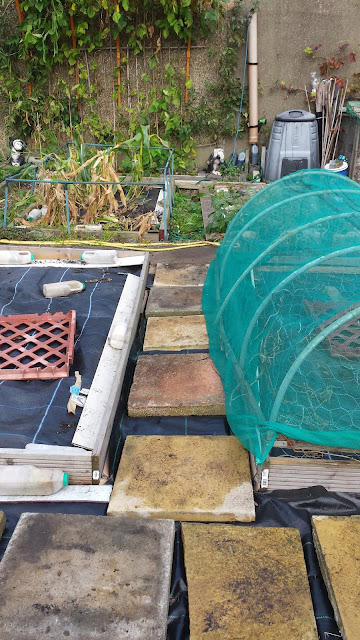 Weedy Path between beds 2 & 3 in the distance

Email ThisBlogThis!Share to TwitterShare to FacebookShare to Pinterest
Labels: Infrastructure, Plot 1A