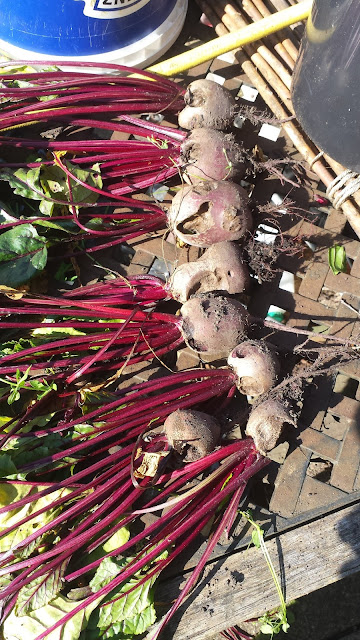 I arrived at the plot around 8:30 and left at 1:00, my brother and sister in law were on their plot so there were a couple of tea and coffee brakes during the morning.

I took a bucket and a half of apples and compost material including three sacks of grass cutting with me and with what I cut back on the plot managed to fill up double Dalek 6 and Dalek 4 to the brim again.

I harvested beetroots that were large enough, but found that many have been nobbled or were in the process of being nobbled by woodlice.

The weeds are going bonkers in the paths and as fast as I'm clearing them they are returning with a vengeance.

The ex- woodchip paths as now such nice nutrient rich material that they are supporting weed growth.  I think that could also be the reason I've experienced woodlice attack on the beetroot as the large woodlice population now have very little to munch on.

As soon as the drop off and pick up area is completed I will be arranging a deliver of woodchips and completely re laying all my paths, bagging up the existing paths for adding as browns in the Daleks. 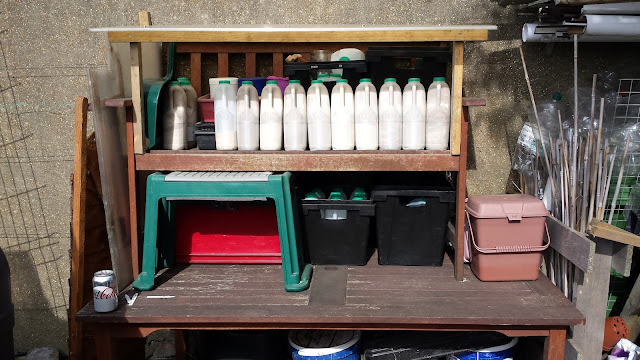 I had the song "ten green bottles" going through my mind as I typed the title to this posting. It was so easy to fill empty milk bottles with the dried out sand from the old bottles that had become brittle and split.

They have done quite well as I started making and using them in 2013, so I'm guessing I will have a rolling programme of recovering old soft bricks, drying the sand and making new soft bricks from now on.

As I was clearing the greenhouse further I found a new bag of sand, but it was still too damp to make filling the milk bottles easy, so all the now empty metal trays have been re charged and hopefully in a week or two they will be dry enough for me to fill another batch of empty milk bottles. I will need some extra for holding down the bed covers over winter

I used up the large pump action weed killer on the remaining weeds on the paths and on the boundary with my neighbour who has not returned since spring. I have my name down for his plot and I'm aware that the 28 day Notice has expired and that a Notice to Quit, has or will be sent shortly, then when I get the paperwork I will be at liberty to attack the plot, bush cut all the weeds back and have a nice big bonfire, and start clearing and getting ready for next year.

Then the fun will start as I will have to move everything from the Spencer Road plot to my new plot at Mill Green. At least it will be easier to keep an eye on one large plot rather than splitting my efforts between two plots.

I have four and a half hours of sheer joy in the sun and a lovely bright and sunny and warm 21 degree C Autumn day, and lets hope this lasts a little while longer.
Posted by cadalot at 16:24

Email ThisBlogThis!Share to TwitterShare to FacebookShare to Pinterest
Labels: Beetroot, Cucumber, Plot 1A