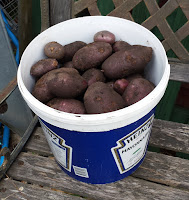 Today was spent harvesting a bed or Sarpo Spuds and I have to say they did really well. I managed to get three buckets of spuds out of a 2.4 x 1.2m bed planted with 18 seed potatoes.

The seed potatoes were egg sized spud that I had saved from last years crop. Saving my own seed potatoes is not something that I will do every year but it was an experiment and it worked fine and dandy.

I did take time to brush off as much soil as I could and as we have not had a great deal of rain recently the soil was moist but not claggy. Bed 9 was decommissioned and covered for the winter months to prevent future weed growth. I need to plan what's going where next year before I start adding manure to the beds.

The runner beans keep coming but I did notice a lot of snails on the plants, so I'm not expecting a whole lot more, the excess has been distributed to in laws and my eldest daughter.

There are two nice sized marketmore cucumbers on the vine and a number of small slow starters and I'm hoping they will be ready in a week or so when we run out of other allotment holders excess that I have been given as they know I was late getting stuff in because my wife was in hospital twice early in the growing season.

I love the way that when you do have an excess there are always family and friends and those include your plot neighbours who have not been growing that particular vegetable or have had a problem with that vegetable this year.

Whilst digging up the spuds I noticed that something, mouse, rat or squirrel, yes all three are on and around the allotment had taken a fancy to my sweetcorn. It has not been a very good year for sweetcorn, I don't know what it is but fellow Allotmenteers on Mill Green and Spencer Road have notice that the plants appear shorter and the corns smaller than usual.

I looked what remained of the cob and they were ready for harvesting so I picked the lot. I do have another bed of corn but they have not even developed cobs and I'm doubtful I will get a crop from them. Look like I have been growing compost on that bed. 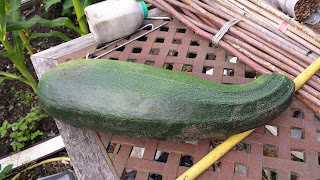 Wally has more marrows than he can deal with and offered me one of his excess marrows.

My plant died early on and I didn't get any planted this year. I have seed from the Wyevale 50p seed sale ready for next year, and if I do manage to get the half plot next door, these are the kind of things that can be allowed to grow and take over the areas I will not be able to weed and cultivate 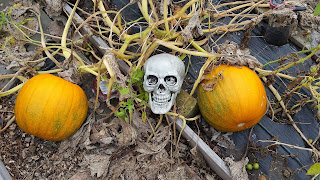 A swift visit the Spencer Road plot on the way home resulted in me discovering that the self seeded pumpkins that were green and covered with foliage last visit have nearly turned colour and the vines have died right back.

The Burpless cucumbers are doing well, and I have the obligatory cucumber that has decided to grow through the mesh netting meaning it will have to be cut in order to harvest, I may get 3-4 cucumbers if the weather holds and we don't have an early frost.

After Sunday lunch I wash and trimmed the spring onions. Skinned and cut up the sweet corn and put in the freezer, the beans can wait until tomorrow.

I also had the excitement of trying the help the neighbour put out a fire that was consuming his boundary fence and hedging whilst we waited for the fire brigade to come and finish the job. Silly sod had decided to burn his hedge cuttings next too the fence and the wind took some burning embers and the fence went up as if it had been covered in petrol.
Posted by cadalot at 01:00