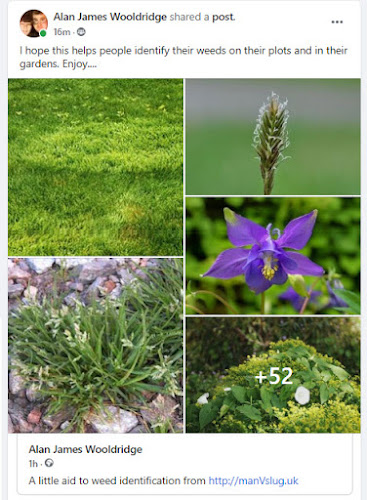 A weed is a plant considered undesirable in a particular situation, "a plant in the wrong place". Examples commonly are plants unwanted in human-controlled settings, such as farm fields, allotments gardens, lawns, and parks.

The term "weed" has no botanical significance, because a plant that is a weed in one context is not a weed when growing in a situation where it is in fact wanted, and where one species of plant is a valuable crop plant, another species in the same genus might be a serious weed, such as a wild bramble growing among cultivated loganberries.

In the same way, volunteer crops (plants) are regarded as weeds in a subsequent crop.

Many plants that people widely regard as weeds also are intentionally grown in gardens and other cultivated settings, in which case they are sometimes called beneficial weeds or wildflowers.

The term weed also is applied to any plant that grows or reproduces aggressively, or is invasive outside its native habitat.

Not being able to get to my allotment for four months during the first Corona Virus wave, my plots are covered with weeds, and it occurred to me that I could not identify many of them and wanted too and to find out the best ways of dealing with them and should they be Burnt, taken from the plot, safe to compost directly of did they need to be dried or drowned before adding to the Dalek Army?

The intention was to make a post using a table with a small photo and the plants name, what it's also know as, a few facts and then a link the the RHS or other source of more information.
The problem is that Google now own Blogger and are re-engineering also know as "fucking up" the editing software that was already naff. Tables were in the beta that we have been using before the forced move over to the new platform, but suddenly it's gone!
So until it returns and hopefully in a functional way and without having to program in HTML my solution has been to upload all the photos to my Facebook and put the information and links there.
I have shared this with all the gardening and allotment groups I belong too so that people can access until Google sort out the Blogger editor and I can do it directly on here.
Information Sourced from a number of pages via a google search for "weed identification UK" and books I have, a few listed below.
DK Allotment Handbook Pages 239-239 Gallery of Weeds
RHS - Identify Common Weeds (20 Number)
Practical Home 36 Common Garden Weeds
Perfect Ground Solution - Weed Identification
Posted by cadalot at 09:05

Email ThisBlogThis!Share to TwitterShare to FacebookShare to Pinterest
Labels: Weeds