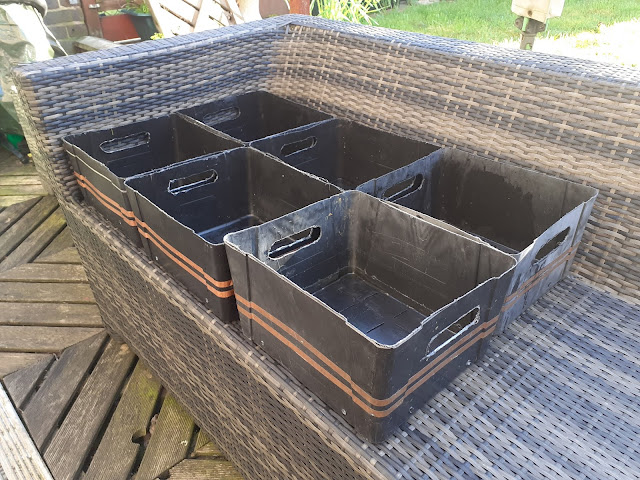 As you will know if you are a regular reader of manVslug.uk I'm self isolating and shielding my wife from the Coronavirus as she is very high risk and as much as I would like too, and I'm allowed too, I have resisted the call of the allotment (so far!) this means that I'm looking at ways to be inventive and grow more than just tomatoes at home in my postage stamp garden.

I placed this photo and the text below on my favourite Facebook group  Allotment & Garden Club - Mind Your Peas and Cues:-

"I found another two of these after taking this photograph, a couple will be used for Radish and a couple for lettuce now I need to decide what I can get away with growing in the remaining four and where I'm going to put these so the bleeding cats that visit the garden don't use them as litter trays.

Any suggestions they are 270 x 230mm on plan and 100mm deep to the bottom of the carrying handle. #IsolatedGardeners"

Lots of discussion about cats and ways of keeping them off , from growing mint, which I have and appears to have no effect on them but the two main suggestions not around the square flower buckets and where did I get them from were from:-

Beau Dendy so worth a go Other salad like Rocket, carrots, cauliflower, cabbage, leeks. I use wooden bar b q sticks in mine to keep the cats off!

Claire Billington You can put canes in and cover with net to keep the cats and birds off. How about peas/ beans.

Sarah Bee I would try Beetroot

Four of these containers were made up for an experiment that I did using leeks and spring onions in the past, so I know they are an option, but I can't see 100mm depth of soil being enough for Cauliflower & Cabbage.

I don't grow peas and my daughter will not eat them after seeing a maggot come out of one when I was getting them out of the pods. Looking at the spacing diagram for the metric version of Square Foot Gardening I made some time ago for inspiration of variety and spacing.

Normally I grow 100's of beetroots at the allotment and pickle, but I could grow a few fresh beetroots they would work out at 16 to a bucket and 9 French beans So based on the Mel Bartholomew guidance in his original book that I have a copy off, I should be able to get 16 Radish in a 300x300mm plan area. The square buckets are a little smaller than that, but it looks like a good idea. 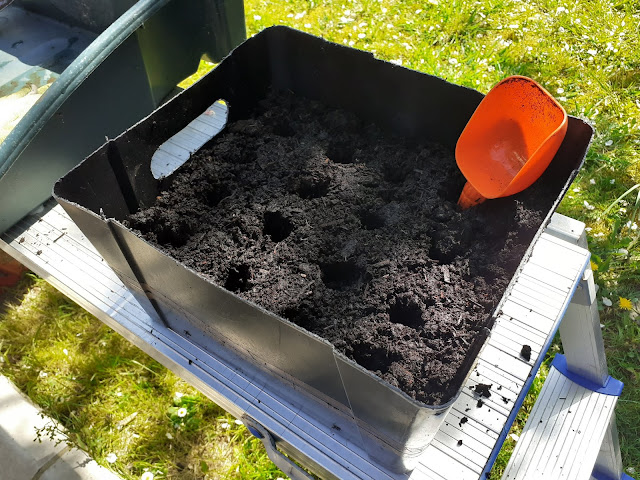 Especially when I dibbed some holes in to take the radish plug plants that I have been growing in the greenhouse after watching Charles Dowding sow them in modules that way. 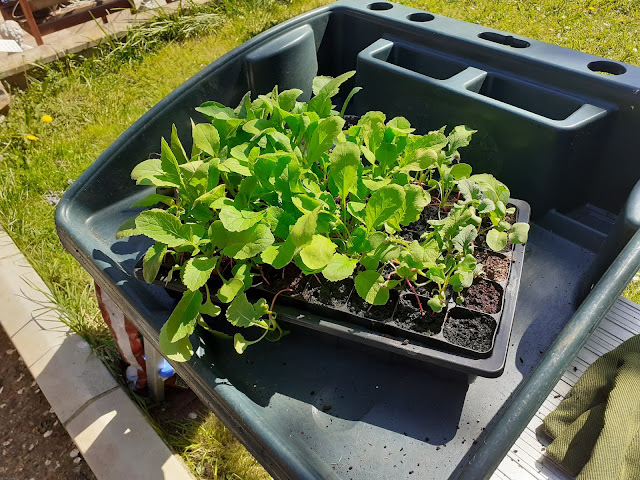 I had left then longer than Charles did before planting them out and as a result they had got a little tangled with their neighbours, but after a while I managed to ease them appart, and lesson leant get them in before they grow too big and get matted in the future. 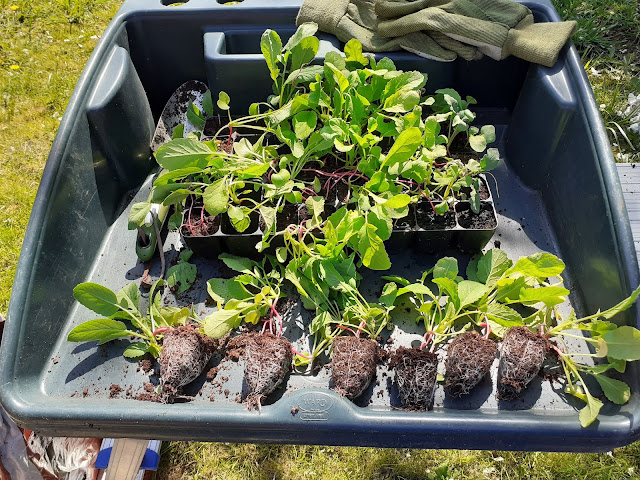 I love these CMH Modules it's so easy to pop the plug plants you want and the root structure is really good. 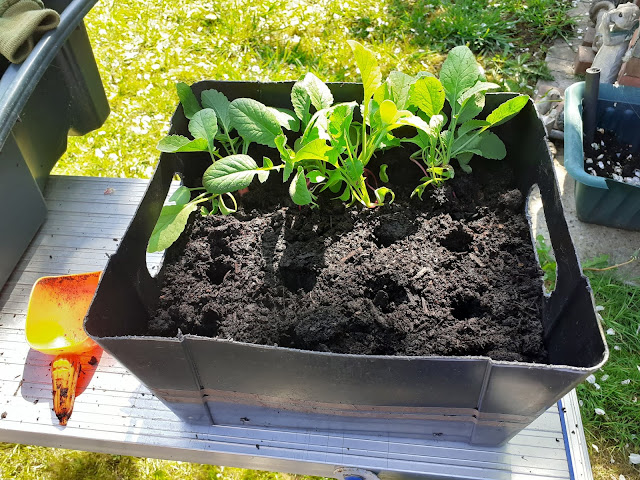 Placing the first six the recommendation on spacing look righ-ish 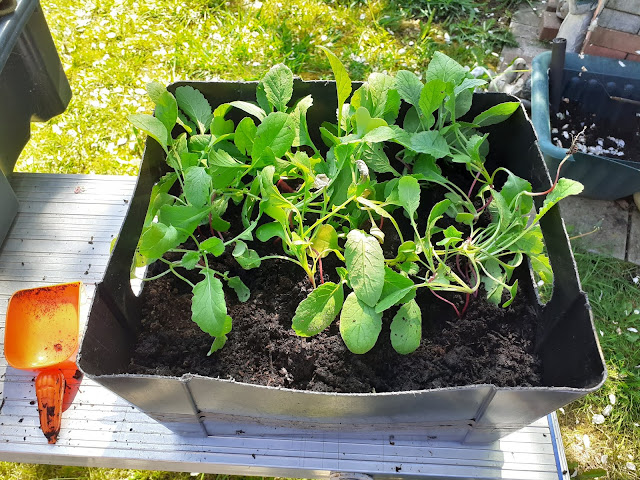 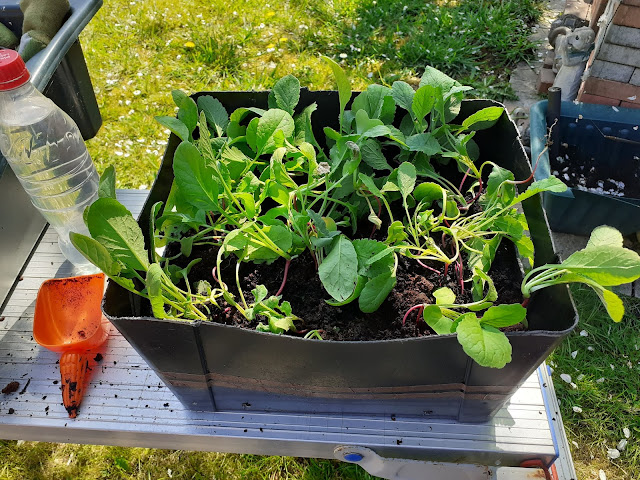 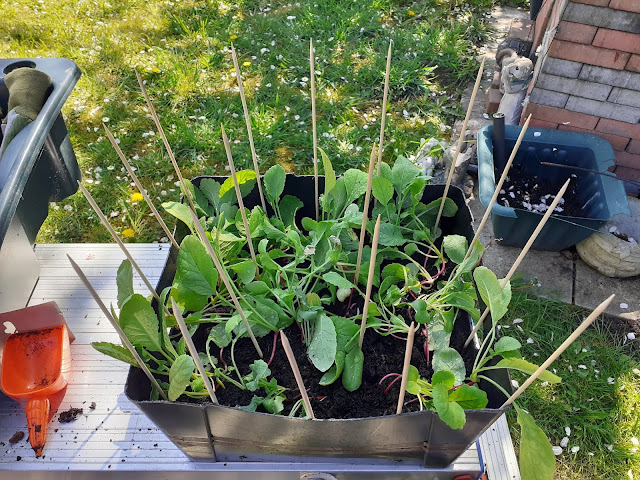 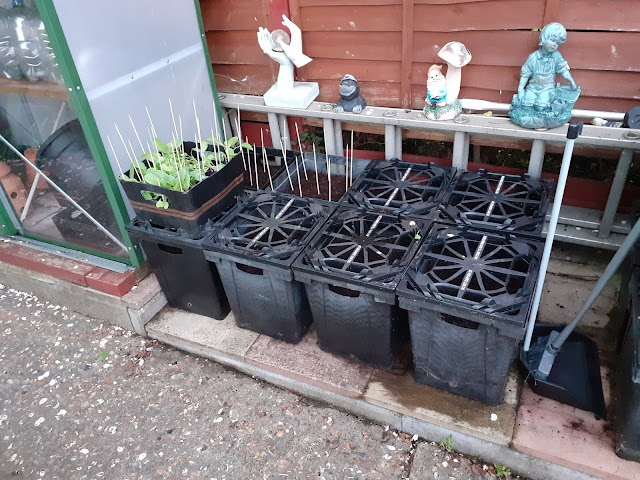 Seven of the eight deep buckets cleared of last years compost. New compost added to a depth of approx. 125mm and two Pentland Javelin seed potatoes placed in the bottom of each bucket, then filled to within 50mm of the top of the handle slot with last years compost/coir mix and a 50mm layer of new compost added so that nutrients can wash and migrate down as it rains into the bucket.

The pack says sow mid to late March, but I usually wait until the danger of a hard frost is over. Growing time is around 10 - 12 weeks so these should be ready for harvesting between the 28th June and the 12th July-ish.

With most first earlies when the flowers open on the halum or vegetation that grows to about 600mm in height that is an indication that the potatoes are ready for harvesting. It's only maincrop potatoes that one has to wait for the foliage to turn yellow and start to die back before harvesting.

If all conditions are ideal, you may harvest about five to 10 potatoes per plant for your gardening efforts. Yields are based on both the care your give your plants during the growing season and the variety of potatoes you choose to grow. I've never seen what is expected of Pentland Javelin which are baby new potatoes.

Again with all potatoes carefully dig up, and in my case empty the bucket out, harvest the tubers (spuds) and leave them to dry for a few hours and then store in a cool dark place.

Pentland Javelin are great for boiling and salads and they were a bag that I picked up for B&Q when I visited before the lockdown. 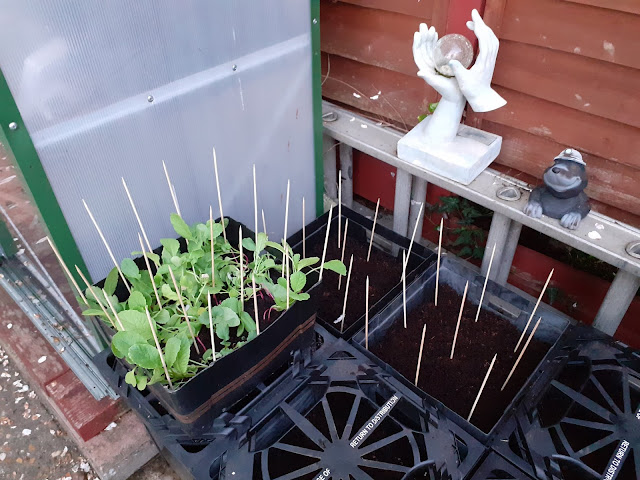 The spikey anti-cat hedgehog has been used buckets I don't have lids for and now it was getting chilly and the light was going at around 8pm so I had a tidy covered my tomatoes with the bubble wrap mushroom tray, closed the greenhouse up and called it a day.

#IsolatedGardeners   #gdnbloggers
Posted by cadalot at 09:24