Photo of how I left the traditional tomato growing area tonight, which is a whole lot more tidy than it was before I started tonight, as I had many flower buckets stacked so as to reduce the weeds and stop the local cats from using them as a toilet.

Before lockdown I had started to clear the spent compost/coir mix and was taking it down as soil improver for the new beds. The problem now is that I'm using four of the deep buckets as mini compost bins and that I'm having to decant the spent soils to put fresh in for the spuds, then refill with spent compost and re-cap with fresh compost. 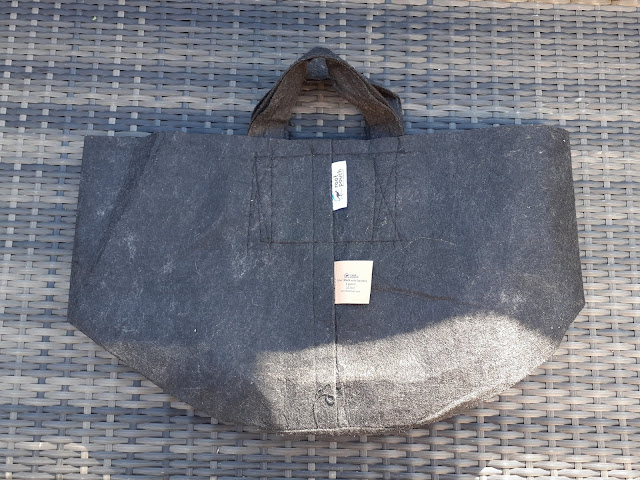 I had a brain wave in that I was given a 6 Gallon or 22 Litre Black with Handles Root Pouch at the Gardening Press Event in March to play with. If I grow some spuds in this then I can loose some more of the old compost/coir spent compost and I can lug the Root Pouch into it's final location when I decide where that will be.

For more info see http://www.rootpouch.com for some reason I can not access this web site from my computer using 4 different browsers and I have CCleaned my computer. I can however gain access via my mobile phone. I have brought the problem to the attention of the UK marketing company IKON for them to find out why 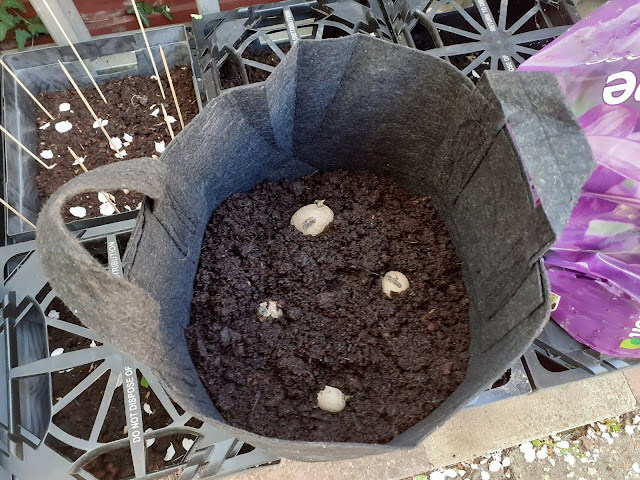 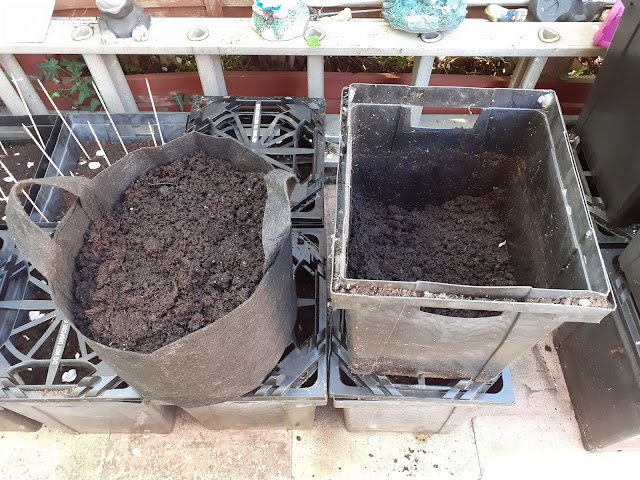 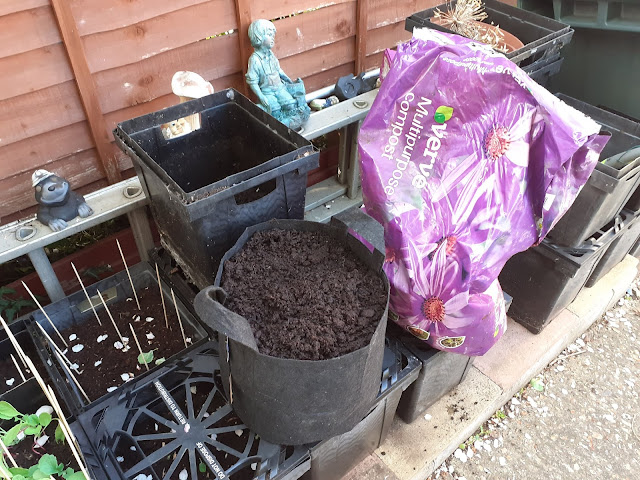 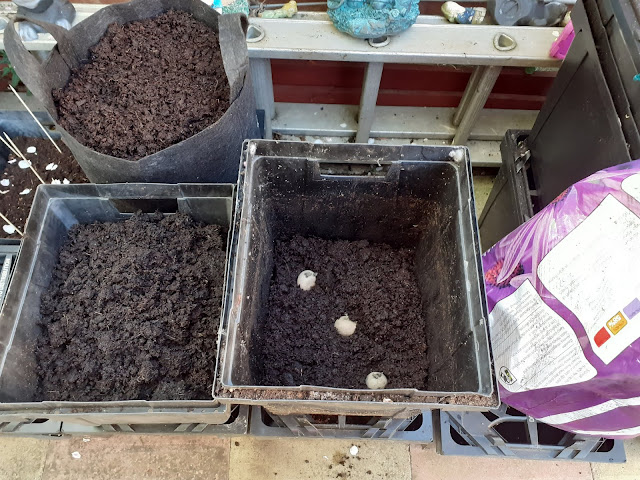 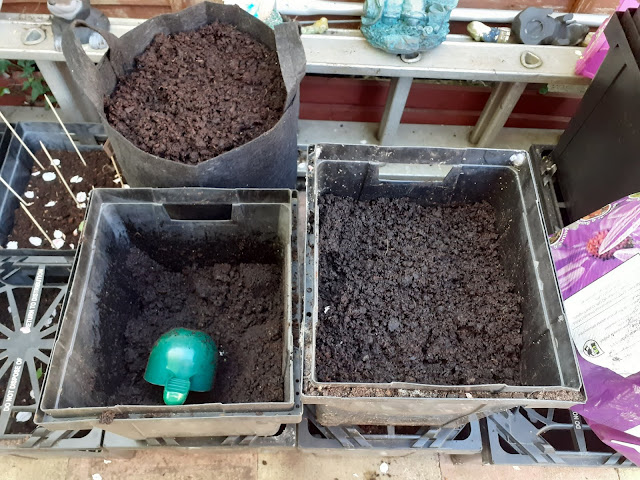 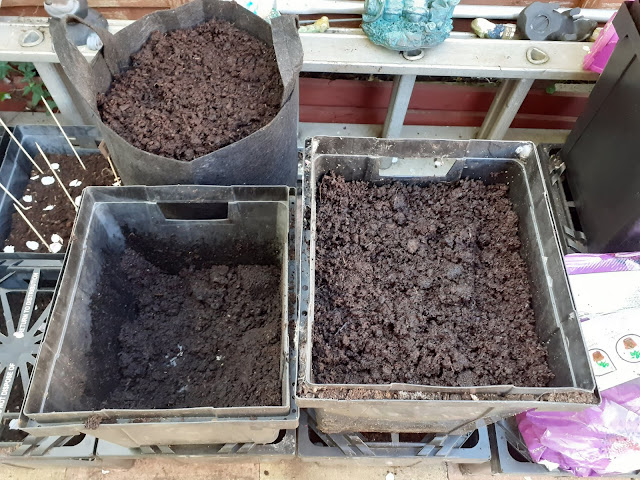 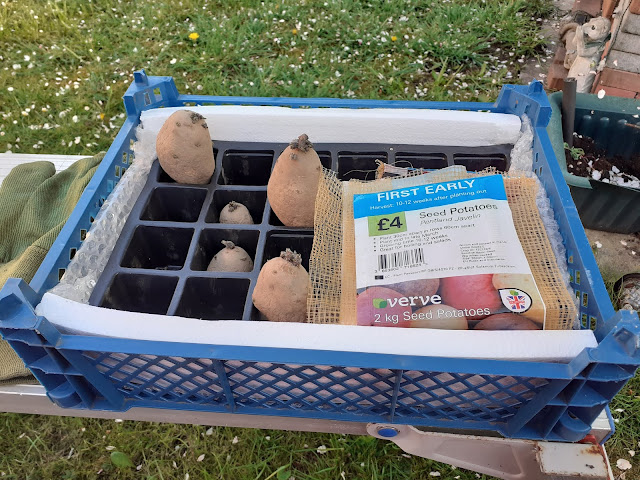 There is bubble wrap under the module and up the short sides of the mushroom tray and insulation packing from something I saved along the long sides. That and a sheet of bubble wrap cut and put over the spuds at night have stopped them from getting frost damaged in the Norfolk Space Saver Greenhouse.  The excess spuds were re-bagged and donated to my neighbour via the roof of his shed over the fence observing social distancing. 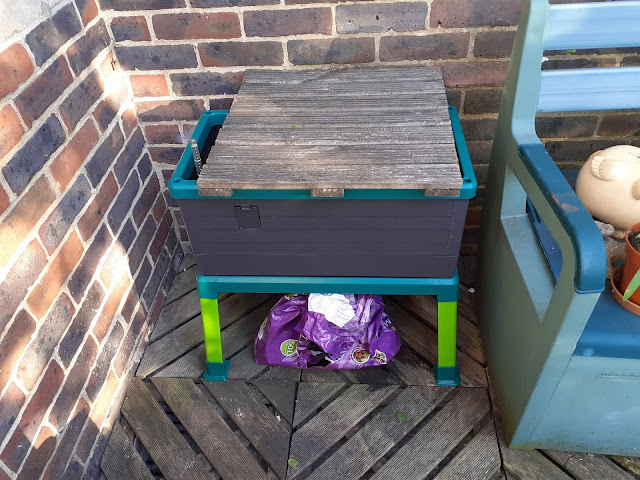 BioGrow City Jungle filled up with B&Q Verve ready for spuds and a timber decking tile temporaty cover to keep the cats off from using it as a loo. 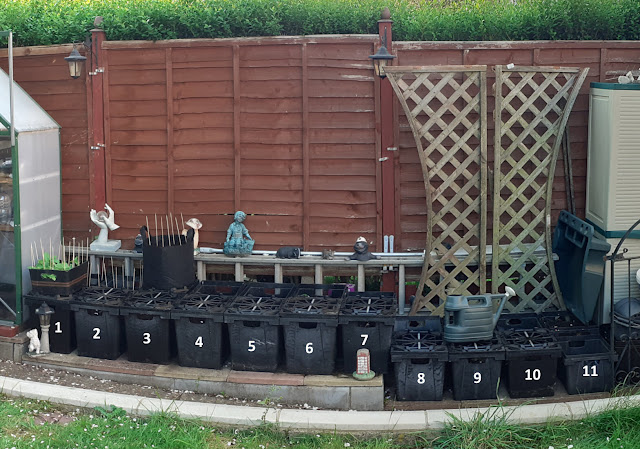 So this is what I'm left with. 1 - 4 front and back row now have Pentland Javelin spuds in.

The two damaged but not destroyed fence panels from the retaining wall will be fixed together and used as a climbing frame for Cucumbers in the shallow flower buckets, so that's 9 &10 back row buckets accounted for.

Now I need to think about what I can grow in the remaining buckets. I have some sweet potatoes ordered so I need to leave some room for those. Perhaps some French beans, sweed & parsnip.

I have just received something that will free up four spaces that would have been tomatoes along the path, more on that to come later.....