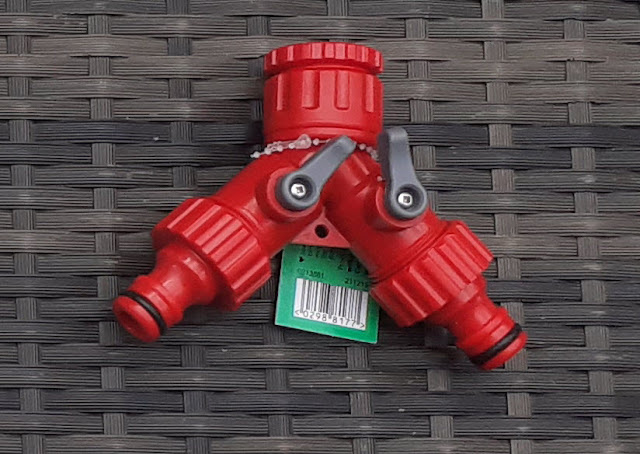 I went to the allotment with the tap splitter I had picked up from Wilko and watered as much of the allotment as I could between 5:15 - 6:15. The plot holder on plot 13 turned up just after I arrived so I took off the single adaptor on the tap and fitted the twin tap splitter. It reduces the water pressure with two people using a single tap but most plot holders are watering early morning or later in the evening.
This tap splitter didn't leak like the one that was taken off the plot 13 dip tank and tap. I also managed to get my watering system connected to the tap on plot 3 so I could water plot 1A and plot 1at the same time, and this was the only reason I managed to water most of my allotment in a little over an hour.
I managed to pull two sack loads of weeds from plot 1A whilst down there. Hopefully everything in the ground will survive the next couple of days during the heatwave and I will be looking at perhaps going back down Tuesday night to water again.
I have lost some plants that were on the table behind the plot 1 greenhouse that were due to be planted out, but one expects a few not to make it during a heatwave and when it's not possible to get to the allotment on a regular basis to water.