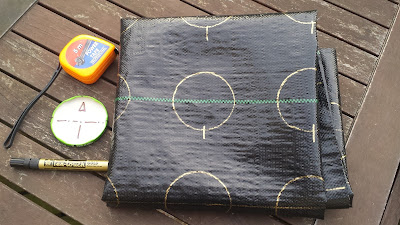 Today I cut two sheets off the weed membrane roll, the width is 2m and my beds are 2.4m x 1.2m wide, so first cut to length, then cut to width leaving me a 800mm wide strip for under the centre path.

My daughter gave me a Sakura Pen-Tough Gold Medium Point 2.0mm quick dry Metallic Paint Permanent Opaque marker that she no longer has use for, and it's ideal for marking out the holes on the black weed membrane. Knocks the socks off using chalk like I have used before, not as messy and I can fold the sheet up to deal with later when I have time.

First I set out the lines for the 7 holes along the width of the sheet measuring off the woven lines for guidance, then I marked 150mm centres along the length such that when I placed the Doritos Mexican Salsa lid that has a diameter of 85mm in the line with the arrow lining up with the spacing ticks I had put on the lid on the quadrants, I could then draw around the lid giving me a guideline for the soldering iron when I get around to cutting out the holes.
So 105 holes to cut and another sheet to cut off the roll and mark up like this one. 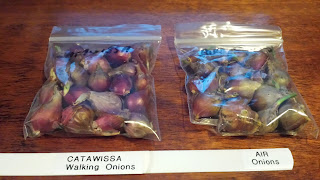 My Walking Onions came today, I opted for a 50:50 split of Catawissa which originated from the USA and Air Onions that came from Finland.

The most common tree onion and one of the most prolific other than the air onion is probably the Catawissa. The scale of farming in the States allowed it to become very well established after its rediscovery in the 70s and many un-named tree onions are probably derived from this variety.

Ian from treeonions.com was true to his word and I received 20% extra onions see post below