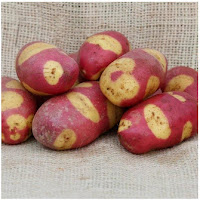 My Maincrop potatoes this year were Mayan Rose A new variety and an offspring between the well know Phurejas varieties, Mayan Twilight and Mayan Gold.

The DTBrown web site says "All Phureja's potatoes have an excellent flavour and cook in a third less time than standard varieties - flavour and economy! The yield may not be the best, but the taste more than compensates and we certainly recommend you give them a try!"

And try I did and this is half of what I got out of a 2.4 x 12m bed on the plot, after discarding the worse of them, so they were right in that the yield may not be the best, as for the taste I still have to try them. 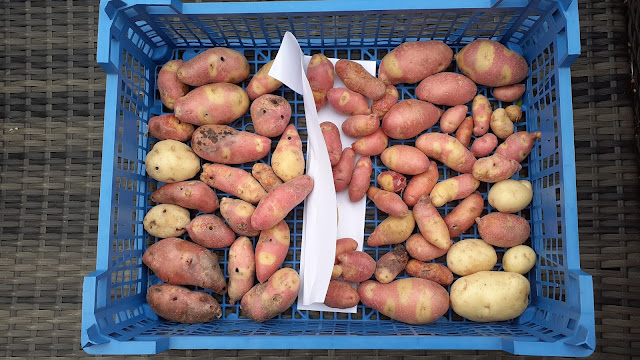 These potatoes Originate from the Andean valleys in South America, Phurejas potatoes benefit from a longer growing period than other varieties, ideally planted in warm soil at the end of March and harvested in September.  My harvesting was a little later that should have been, as these were harvested last weekend.

“Mayan Rose has a striking and unique coloured skin,” Granted they are like a Friesian cow of potatoes, and very attractive to look at on the web sites and the catalogues. “cooking quickly when boiled and also ideal for mashing, roasting and wedges”. Noted on the cooking quickly. 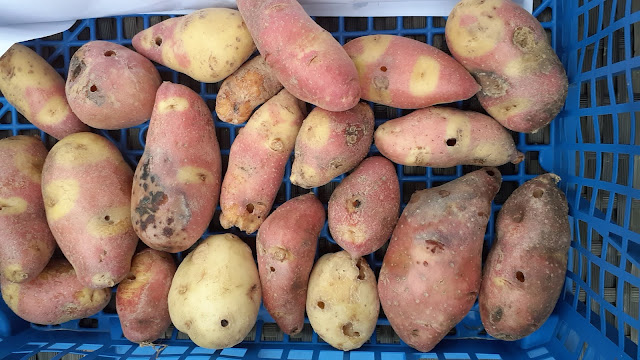 What they didn’t mention was that they appear to have little or no wire worm resistance at all!

Wireworms are the larvae of the click beetle. The larvae grow up to 25 mm in length and are orangey/brown in colour with a narrow, segmented body, biting jaws and 3 pairs of short legs behind the head. ... It has been estimated that there are more than 60 species of click beetles in the UK.

Wireworms take from 2 to 6 years to mature, and larvae will live and overwinter in the soil to depths of 24 inches (60 cm.). When temperatures reach around 50 F. (10 C.), larvae will move closer to the soil surface and return to deep soil again when the temperatures soar above 80 F. (27 C.).

Wireworm attack is annoying, but it's not a disaster and there's no point over-reacting when you see it. In larger potatoes the holes are small enough to cut out, and normally the pests that created the holes have long since vanished.

A few of the larger holes may had been occupied by homeless millipedes. Most of the potatoes will be fine to eat with a bit of careful peeling. The problems will arise when it comes to storage. Those tiny holes will make the potatoes vulnerable to spoiling when they're stashed away in their large paper bags in the shed over the next few months.

If Mayan Rose are as vulnerable to wireworm as they appear, I'm going to have to look for an alternative maincrop next year no matter how nice they taste. I’ve also come to the conclusion that growing all the potatoes is the way to go for me next year.

There's not much resistance against wireworm to be had.