Making The Greenhouse into a TARDIS ! 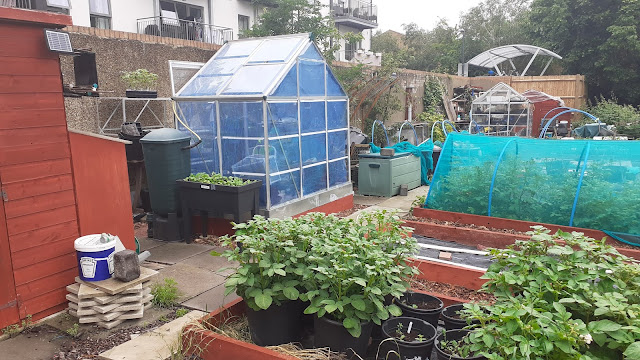 This morning I turned my Greenhouse on plot 1 into a TARDIS! and set up the Quadgrows. 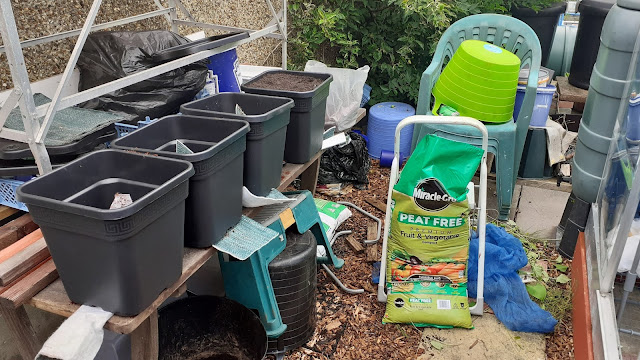 The capillary matting installed I filled the bottom 25-30 mm of the pots with coir and then used the Miracle Grow Peat Free Fruit and Vegetable compost. I used the bulb planter to remove the vending machine cup sized hole and planted the young tomatoes at depth so that the first true laves were on the mulching caps. 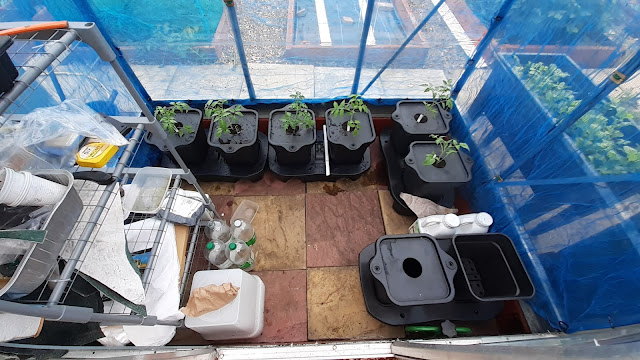 In the time I had this morning I only managed potted up into 6 of the 8 pots available on the Quadgrows. 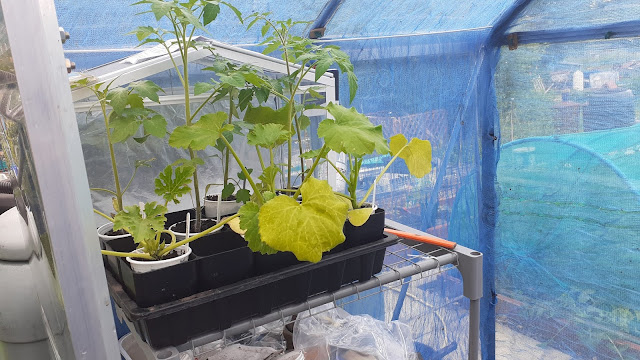 The remaining tomatoes for the Quadgrow and the second Narrow Bed are with the extra courgettes resting in a bath of water until my next visit, which may not be until late Friday or Monday as I don't have anyone to keep an eye on the wife this week. 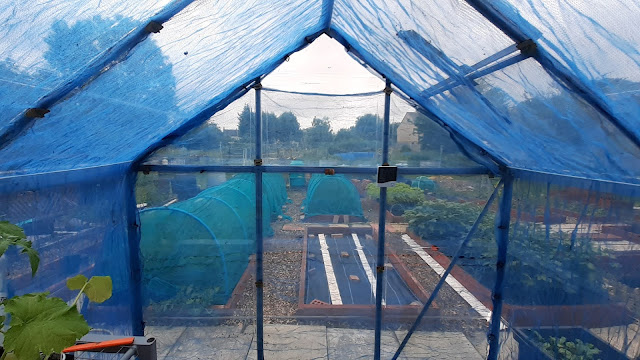 White Net Curtain wire cord and hook and eyes at ridge and eves level combined with Greenhouse Insulation / Shading support clips on the middle mullion on slopes and on the gable end internally. Thermometers mounted on the side and gable walls off the shading support clips and a small S hook formed out of wire. 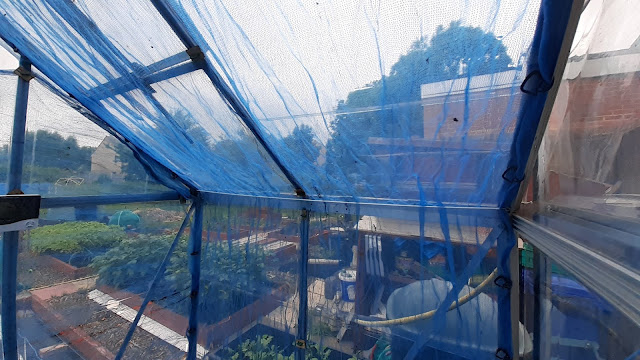 The blue 2m wide scaffolding debris netting is ideal to provide shading to the plants as this greenhouse get the sun all day. I cut enough to go up the wall, over the roof and back down the other wall. and then a section long enough for the gable end from corner to corner.
The clips in the corner are not supposed to be used as I have but I was improvising and needed a way to hold the edges in place. I will have to wait and see how resistant they will be to airflow and high winds. 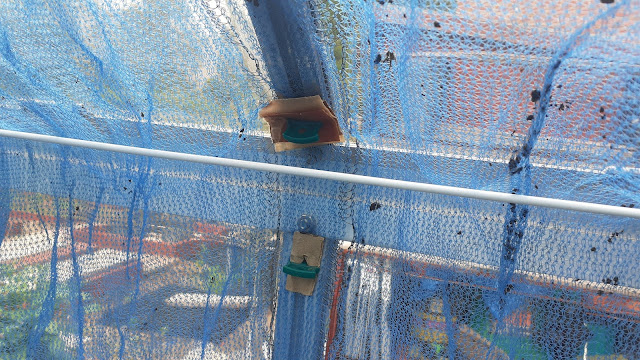 Greenhouse Insulation / Shading support clips needed a washer or some packing so again I made some washers out of cardboard cutting the slots with a Stanley knife. 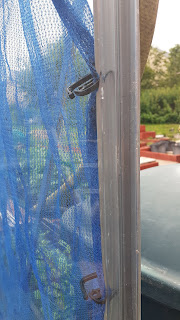 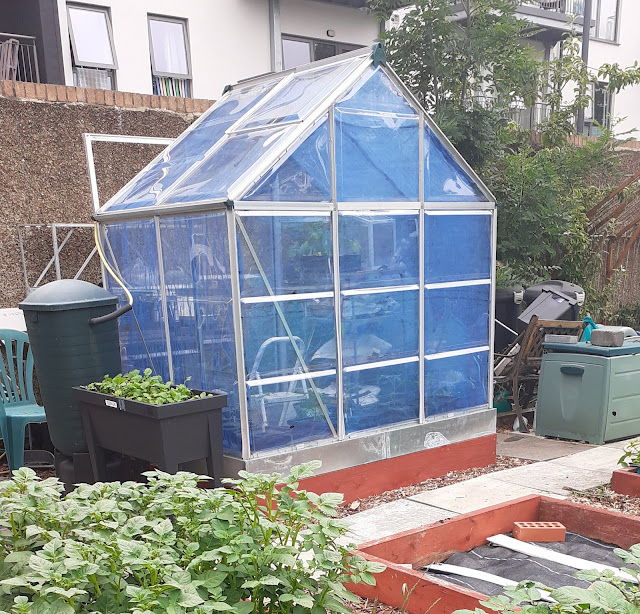 All in all I was most please with the TARDIS look that the greenhouse has now taken on, and I have to say it looks a whole lot better than the green netting I had on the outside of the greenhouse on Plot 1A before I removed it and jet washed the greenhouse. 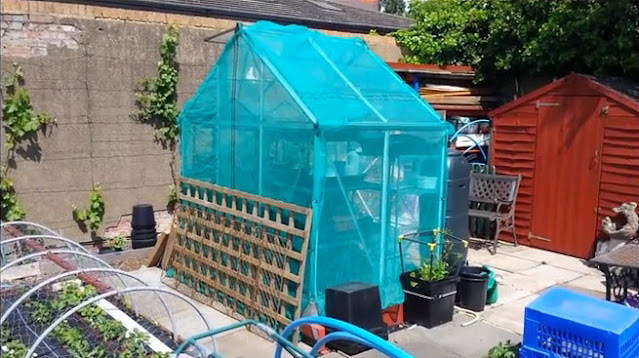 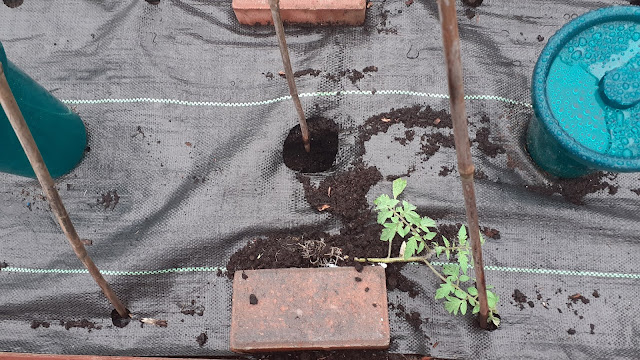 Meanwhile on the plot...... The Bloody foxes had dug out my crimson crush tomato and torn the planting membrane in the process. The poor plant didn't look healthy and I have no idea how long it had been laying there. She was re potted into the ground and watered. most of the 2.5 Litre Hydro Cups were empty or near too it. 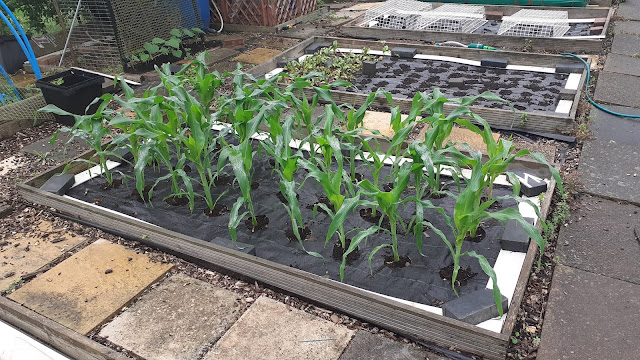 The sweetcorn appear to be liking the rain over the past weeks and are growing nicely. 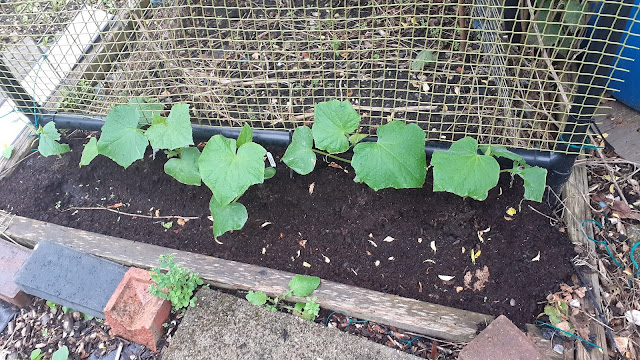 The Gherkins (National) are working there way up to the bottom of the climbing frame and so far are resisting slug & snail attacks. 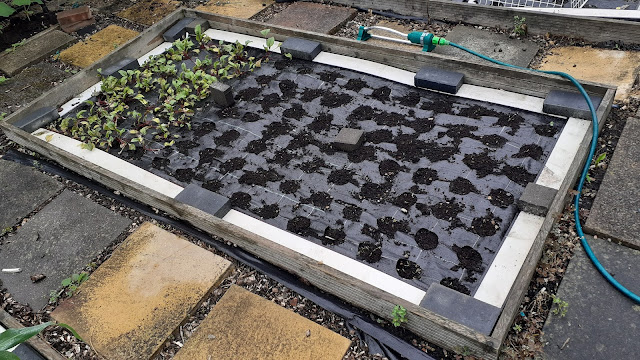 I spotted some activity in the Beetroot bed 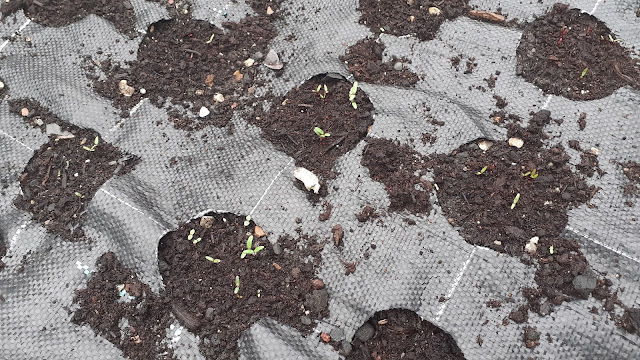 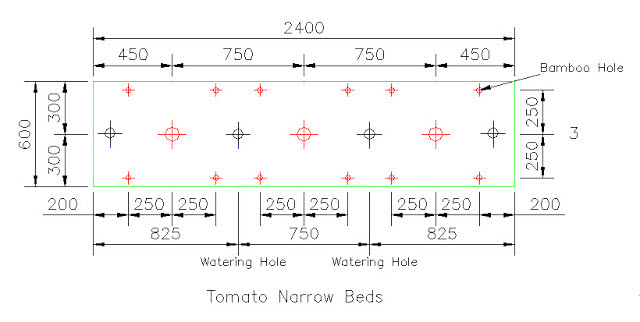 In the evening as it was dry I made another Tomato Narrow Bed Planting Membrane for the second narrow bed and the tomatoes that are in the greenhouse waiting to be planted out. I also trimmed up a 2.4m x 0.6m Blank that was on the first Narrow bed and made a second 2.4m x 0.6m Winter Blank from the large end of roll I had in the brick store.