I planted out Radish and Beetroots on Saturday and there was not Sunday visit and this morning I woke up at 5:10 and decided to get to the allotment as quickly as possible, so a swift breakfast followed by my medication then a dash to the allotment for 6:30 to be confronted with a broken gate latch. 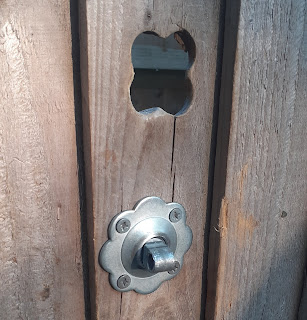 The Bull nose ring was found on the floor, recovered and placed on the bolt on the back of the door so that idverde can come and fix it. 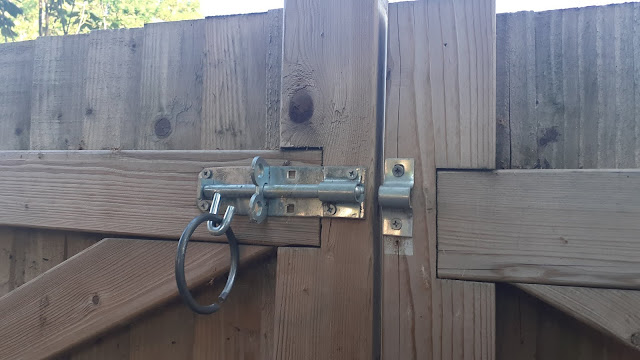 This is something that I have historically brought to their attention the last time during the site inspections last week. 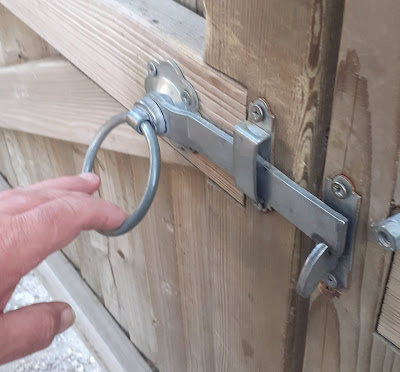 There was talk of getting their welding guy to deal with this and if they do I have suggested a slight angle like the one in the photo above be used.
At this time of the morning the whole of my allotment Plot 1 and 1A is in shadow due to the trees at the far end of plot 1A, and it's an ideal time for watering as it's not in direct sunlight.
I set the sprinkler on the Onions and the Raspberries on plot 1 and then headed off to see what had come of the beetroots that I put in the ground on Saturday. 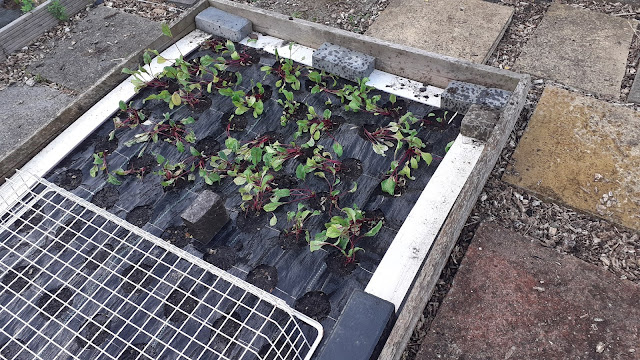 With the scorching sun of Sunday I was expecting to see the beetroots half dead but in fact they were standing and looked to be very healthy, so I gave then a good watering. 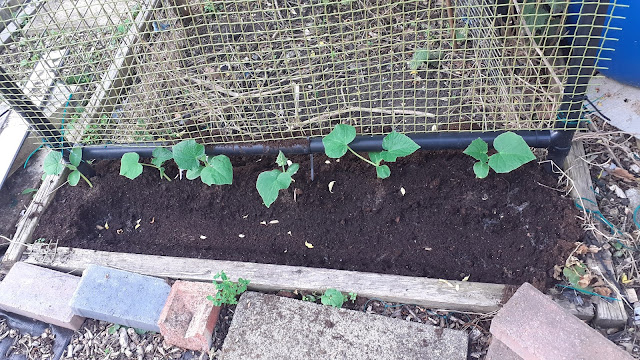 The national Gherkins were looking happy so they too got a good watering. 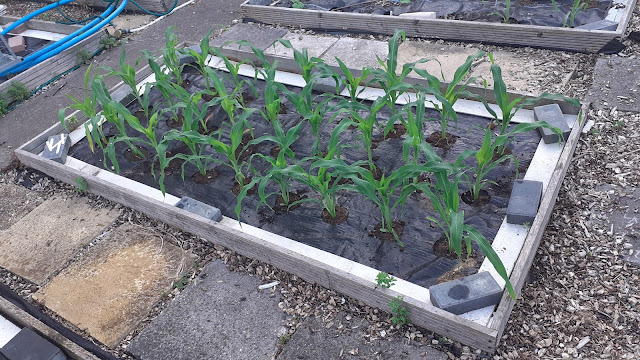 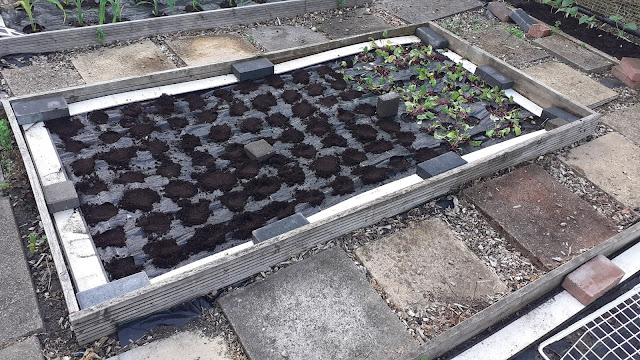 As the beetroot bed was in the shade I decided to direct sow 3 or 4 Cylindrical Beetroot seeds per hole in the rest of the bed and cover with a layer of compost. 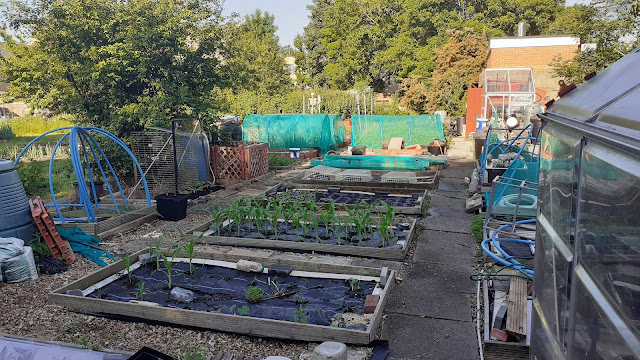 Shadow at 7:55am and the sun rises and starts getting above the trees at the back of plot 1A 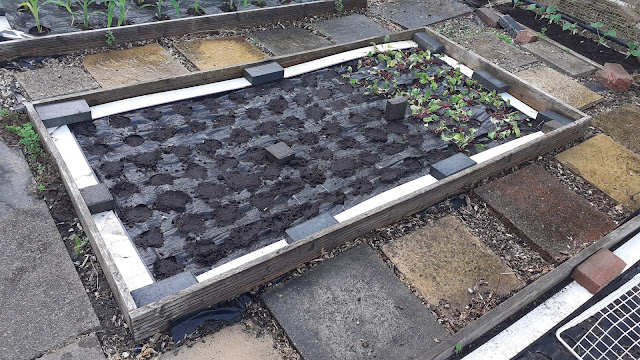 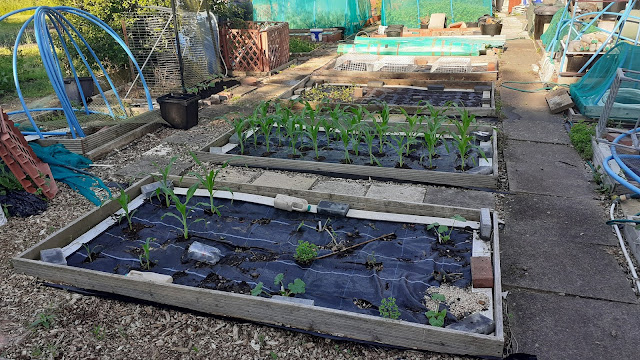 The photo above shows how far the sun had travelled up plot 1 and into plot 1A by 8:11am
One of the courgettes has been attacked by slugs or snails, but I do have 3 plants in reserve on the table behind the Greenhouse on Plot 1 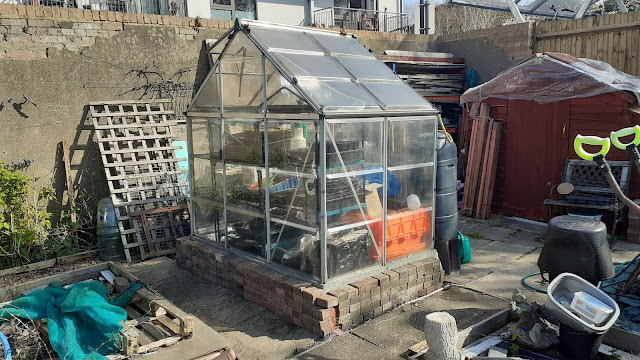 I spent some time clearing the floor in the Plot 1A greenhouse and fixing the staging that broke after I jet-washed and cleaned the greenhouse. I really need to get the shading in place in both green houses as the tomatoes need taking to the allotment and setting up in the Quadgrows. 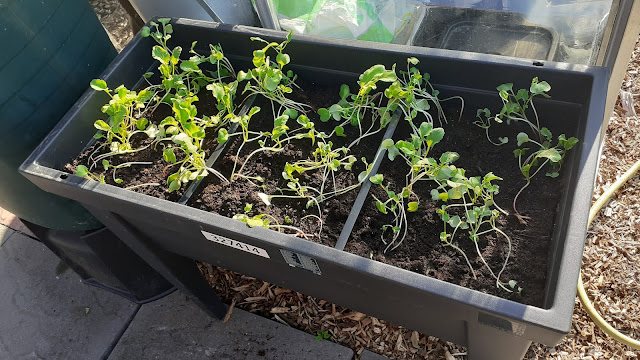 As with the beetroots, I was a little worried about the radishes but they appear OK so they had a good watering as well.  John has promised me a dozen strawberry runners and I'm thinking they will go in the other raised planter with cover on the other side of the greenhouse next year.
As I was watering I noticed that one of my plot holders has build something that I have always fancied have a bash at 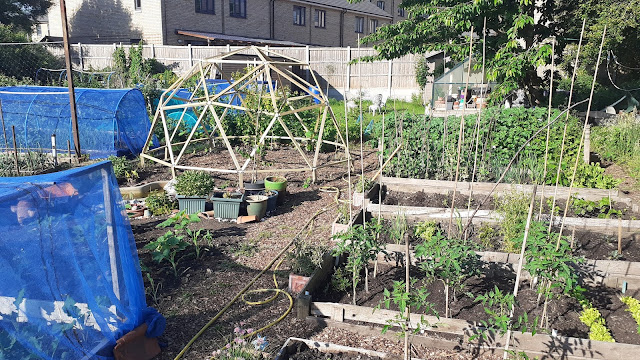 I do hope he is going to turn it into a greenhouse, he does have a small one on the plot already. 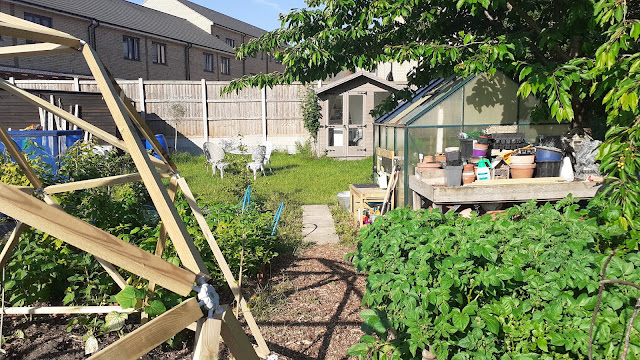 The little summer house on the grassed area is a retreat for his wife and child and him at a squeeze, he has a small shed to erect beside it as his man-cave.
By 9:30 both plots were in sunshine and it was 22C so I made my way home to get my wife sorted for the day.
Posted by cadalot at 12:00