Knock at the door this morning and it's the postie with a box of New! First and Second Early Potatoes from Mr Fothergill's. I was a little surprised as the dispatched & delivered date was supposed to be from the 29th January 2021.

Inside the box with the very informative four page A5 leaflet entitled Growing Instructions for Seed Potatoes, Onions and Shallot Sets and Garlic was a note which may explain the early delivery.

Dear Customer
Thank you for placing your seed potato order with us this year.

Please note a few of our varieties of seed potatoes are already starting to chit (shoot). Please rest assured this is totally fine, whilst it is unusual for this to happen this early in the season.
We have noted quite a bit of this happening this season, the issue has been the warm temperatures at harvest time and then the mild autumn that followed. Several varieties are also notorious for early sprouting, so despite our best efforts and that of our growers, they are off to a very quick start. These shoots are easily knocked off when handles and packed. The tubers will benefit when that early shoot is knocked off, so please do so once you receive them as it encourages all the eyes to open, many strong chits to form and makes for a better crop when planted.
Many thanks for your order once more and we wish you every success with your garden in 2021 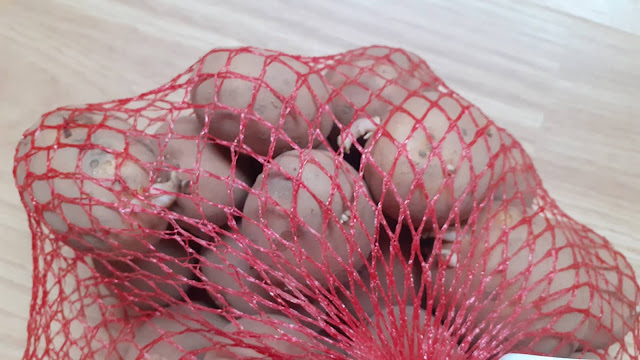 They will not go in the seed boxes, but will be chitted in the Space Saver greenhouse in the back garden or one of the greenhouses on the allotment plots.

The perfect early variety for making chips and roast potatoes, and one that is endorsed and used by McCain; the famous chip company so don't just take our word for it! An appropriate name for this delicious variety with a waxy, creamy texture. Expect a huge yield of oval, pale gold and thin-skinned potatoes which have a yellow flesh. Good disease resistance to many of the common potato diseases including blight.Potatoes are one of the most rewarding vegetables to grow. There’s the nurturing process of chitting, planting and earthing-up, the anticipation of a good harvest as you dig through the soil and, of course, the unbeatable taste of fresh, home-grown, potatoes.All potatoes (except for maincrops) will benefit from ‘chitting’ prior to planting out. The chitting process encourages the seed to sprout, which then when planted, helps them to establish more readily, leading to bigger crops. Simply place them, blunt end up, in an old egg box until the shoots are approximately 1½ to 2½cm (½ to 1in).Potatoes are delivered in 1.5kg bags, each pack containing approx. 15-20 tubers.

I'm thinking these will go into Buckets but in a bed to they can take up water when I can't get down there to water. I have not worked out exactly where on the two plots they will go as it's like starting from scratch now I have some additional infrastructure in place.

This new variety has shown to have a very strong resistance to blight – a problem many of us gardeners will have experienced over the years. Lifted as a second early, its texture is a bit waxier and perfect for salads and boiling. It becomes a little flourier if left to mature and lifted later in the season, making it suitable for chips, baking, mashing and roasting. Expect high yields of round potatoes with a pale-yellow flesh and a superb taste. With good disease resistance we’ve found Acoustic to be a superb all-rounder.All potatoes (except for maincrops) will benefit from ‘chitting’ prior to planting out. The chitting process encourages the seed to sprout, which then when planted, helps them to establish more readily, leading to bigger crops. Simply place them, blunt end up, in an old egg box until the shoots are approximately 1½ to 2½cm (½ to 1in).Potatoes are delivered in 1.5kg bags, each pack containing approx. 15-20 tubers

So in the ground the same time, but harvested a month later than the Premier First Early, Now I'm not sure if I will put these in the ground or in Buckets. I'm leaning towards into the ground.
Posted by cadalot at 14:56