Last night was extremely foggy very pea soup like, but this morning most of it was clear, but with the overnight temperatures being -2 and the daytime temperatures on 2 or 3 it was not surprising that the padlock was frozen and I could only get the key in half way.  A fellow plot holder Adamouse who lives in the flats behind my plot came to the rescue with a flask of hot water that was poured over the side of the padlock to warm it up so that the key would go in and turn.
I took in a bucket of cut up cardboard and placed in the composting store ready for future use. 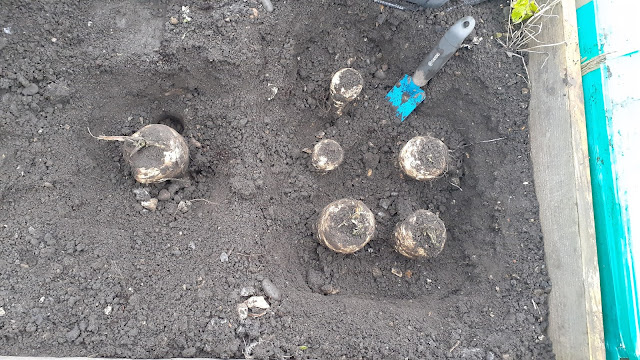 An archaeological excavation of the right side of the Parsnip bed took place and there was a mixture of girths of parsnip heads found and the bulb planter was used to extract cores around the parsnips to a depth lower than the bottom of the pit excavated in the photo above. 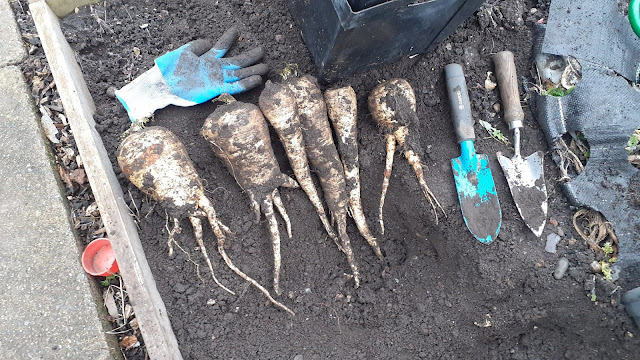 These were pushed down, eased in all directions and finally the smaller girth parsnips were pulled out, the a fork was used to remove the the larger one. and here they are above in all their glory with trowels and glove to give some size reference. 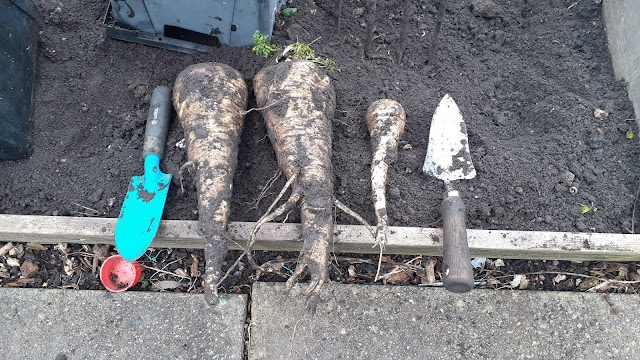 Extending the trial pit up the plot three more parsnip tops were discovered and the same process followed and they were extracted, I didn't think the trowels did justice to just how large these two brutes are so here is a photo of me holding the larger of the two 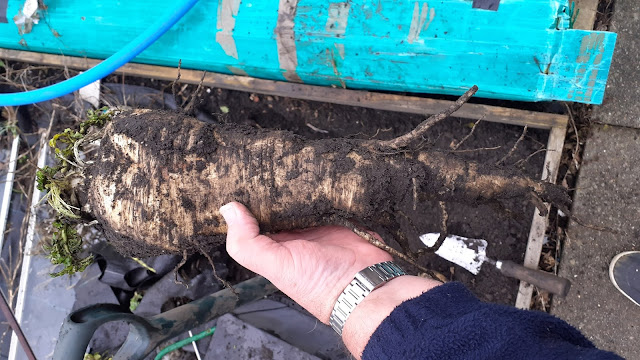 It was now 10:45 am, and a reasonable time to move the timbers around a little, mark them up and cut them to make the sides of the square foot gardening beds

Hopefully staking the timbers like this will allow them to dry out faster and if we get some dry weather I can cut the remaining lengths to 50 inches so that they will produce truly four foot square gardening beds once assembled.
It feels good that I managed to make progress with the timber bed joist and in the process have exposed and used some of the timbers that were near the wall and fencing panel making that area a little more tidy in the process. 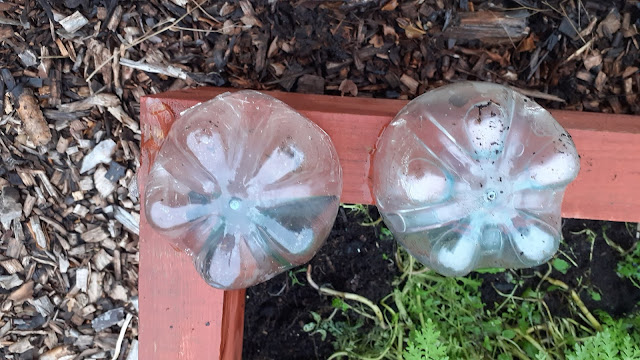 Just how cold has it been?
Which one is the bottom of the pop bottle used to space the buckets and stop them sticking together, and which one is the ice mould made by the plastic?
Posted by cadalot at 18:00