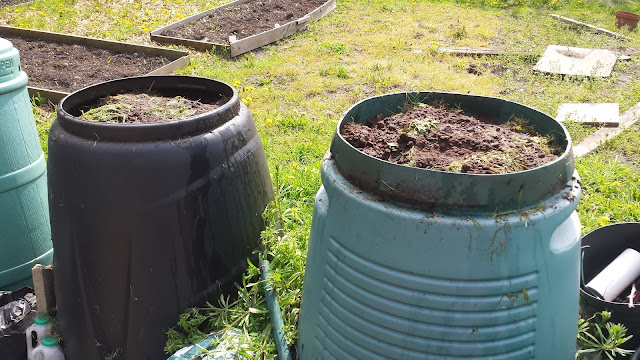 The weather has been great, but with the leg still not 100% I keep being warned not to do too much and not to knock or injure my leg again by the wife and kids. My youngest daughter cut my grass yesterday and I was only allowed to empty the lawn mower and not strim incase something hit my leg, but they could not complain about me taking my grass cuttings and picking up my sisters grass cuttings and taking them down to the allotment to feed my Daleks today. 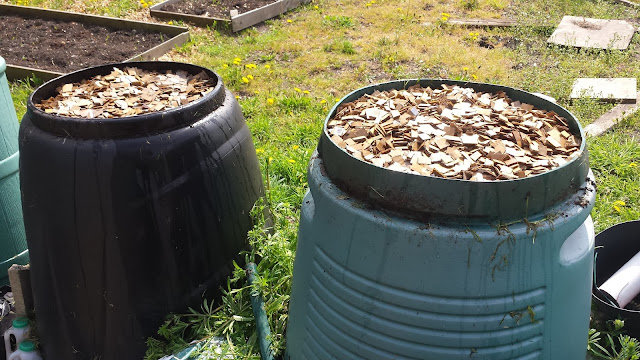 These two Daleks were filled to the brim time and time again last year and today they have been filled with alternative layers of grass, shredded paper, dried coffee grounds and each layer has been watered in. The  final layer was a food bucket of cardboard from Christmas that has been cut into strips and then into squares.

The potatoes in buckets are showing and will need topping up next weekend. The tulips have dried up and most of the flowers have gone but they were beautiful whilst they lasted and I may ultimately transplant them around the edge of the plot in a margin.

The two Raspberries that I bought a few weeks ago before I had my injury to the leg were soaked in water and planted in buckets, they have two chances they will grow or they will die if they aren't already dead, but the roots looked good and I gave them half normal compost and half of the acidic apple compost that I have been making for the last couple of years.

A dash around the paths with some weed killer as I don't have the time to deal with the weeds at the moment by just digging them out and that was it for todays visit which lasted a couple of hours in the midday sun which quite frankly was long enough on my feet after yesterday and our walk in Bedding park after a great Sunday Easter roast dinner. 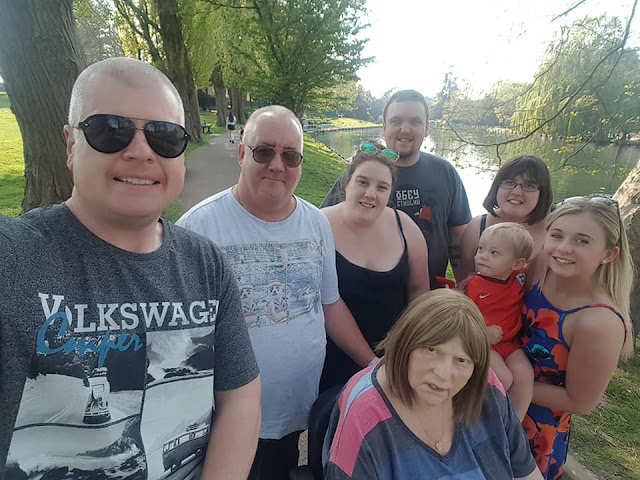 That Fin loves his Grandad but he has a soft spot for his Nan-nan who now has an awsome mobility scooter and gives rides to little lads.

He also found out that the scooter has a red horn button and knows what to press to make it work! 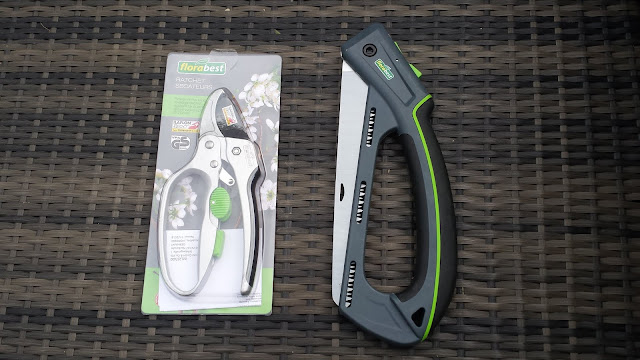 Popped into Lidl for the cordless soldering iron but they didn't have any, but I did pick up a florabest folding tree saw £4.99 and a florabest Ratchet Secateurs £3.99 that according to the blurb are Power-enhancing 4-stage ratchet system for cutting green wood up to 20mm dia. so ideal for the apple tree and for the rest or the Hawthone on the allotment.

I'm a little sick of using the cheap supermarket secateurs that the nut gradually unscrews as you use them or the locking mechanism screw unscrews and becomes loose as you use them, they are cheap but they are nasty and don't really last or stay sharp very long, their only saving grace is that I usually buy them when discounted at the end of season sale.