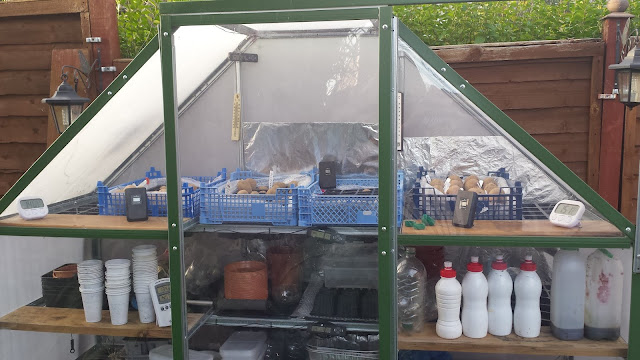 The spuds I bought from Wilko have been in doors now for 5 days in the shopping bags they were brought home in and I really needed to sort them out and get them out of the dark as I don’t want to end up with very long white sickly looking growths, what I need to do is Chit them properly.

One of the first jobs of the veg gardening year is to start to force and chit some potatoes. Chitting means sprouting the tuber – putting it, most eyes upright, in a light, cool but frost-free place at about 50F (10C), somewhere like a porch by a window, a conservator or in a disused bedroom near the window is ideal.

Not having any place like that to leave them until they go in the ground which will be mid to late March, I tend to place my seed potatoes in my Space Saver Greenhouse, which will hold off frost attack sometimes with the aid of a terracotta candle heater. In really cold spells like the Beast from the east in 2017 the trays of spuds will come into the kitchen for the night and then back out to the greenhouse for daylight during the day. 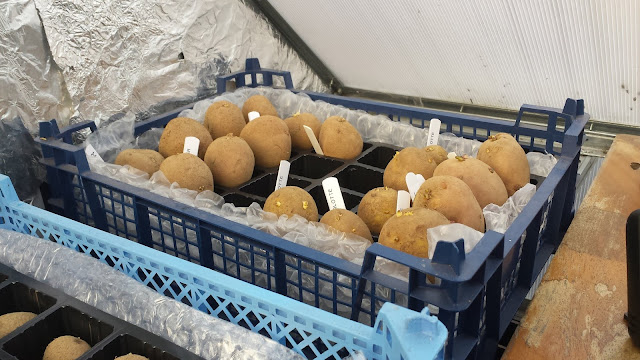 I normally use egg cartons / trays from the local café but this year they didn’t have an excess of trays knocking about so I have used seed tray modules in mushroom trays to keep the tubers upright.

The bottom and sides of the trays are lined with bubblewrap to hold off the cold and frost over night when left in the greenhouse. A sheet of fleece or bubblewrap will be placed over the spuds at night to keep them warm and cozy.

There is great debate about the necessity of chitting, but research appears to suggest that, it does seem to ensure a quicker and slightly larger harvest. With early varieties it gets them off to a flying start, so the harvest can begin by the end of June. It makes potatoes grow faster and form larger tubers once planted out, so we can get in a Main crop in August or early September, before the worst of the blight takes hold.

Second early crops like Charlotte can be harvested approximately 13 weeks from planting when the foliage begins to turn yellow and die back.

Early maincrop varieties like Desiree can be harvested approximately 15 weeks from planting when the foliage begins to turn yellow and die back.

Maincrop varieties like Albert Bartlett Rooster can be harvested approximately 20 weeks from planting when the foliage begins to turn yellow and die back.

Because the size of the seed potatoes was generally good and egg size I've ended up with a few more spuds per sack this year and It's looks like I may have to make a couple more Planting Membrane Sheets with 27 planting positions.


·         Home-grown potatoes should be ready for lifting from June until September, depending on the varieties and the growing conditions. Earlies can be lifted and eaten as soon as they're ready.


·         This will be when above-ground growth is still green, and usually as soon as the flowers open.


·         Second and maincrop varieties can be kept in the ground much longer, until September, even though above-ground growth may well be looking past its best.


·         Two weeks before you lift the crop, cut the growth off at ground level. This should give the skins of the potatoes sufficient time to toughen up, making them far less prone to damage from lifting and easier to store.
Posted by cadalot at 21:54